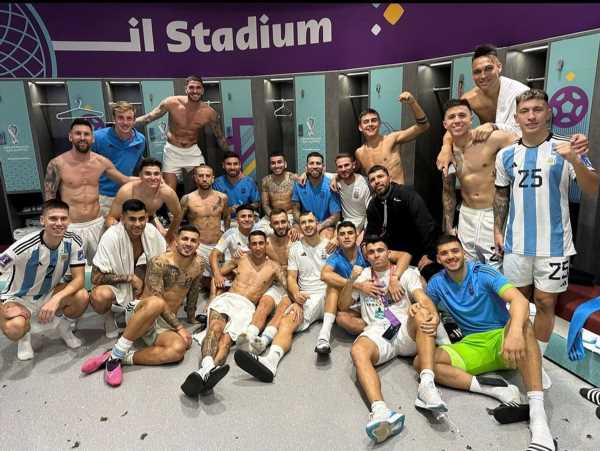 Lionel Messi — but who else — led Argentina’s World Cup celebrations.

GOAT entered the locker room with the trophy in his hand, jumped to the table, and danced as the entire team surrounded him with joy.

France were disappointed they could not defend their World Cup crown after losing to Argentina on penalties in Sunday’s final, but leave Qatar with heads high having fought until the end.

‘Congratulations to the French team for its journey and its fighting spirit in this World Cup. You have thrilled the nation and the fans all over the world,’ French President Emmanuel Macron tweeted.

Macron later went to the French change room and hailed the players for making ‘men and women dream’.

‘You have made millions of French men and women dream so far and still today they have vibrated. You thrilled billions of people who watched this game. You have done great football and great sport. The lessons you will learn,’ Macron — who turns 45 on Wednesday, the day after Mbappe turns 24 — said.

France fought back twice through Kylian Mbappe, who erased Argentina’s 2-0 lead in 97 seconds in normal time before scoring a third goal in extra time to level it at 3-3. But the South Americans won 4-2 on penalties.

‘There will undoubtedly be regrets after this match. I would like you to not have too many regrets please. Listen to me carefully. You are a really great team because I don’t think there’s any other team that could have done what you’ve done so far, to come back twice and come so close to winning it,’ Macron, who was present in Russia when France won the 2018 World Cup, added.