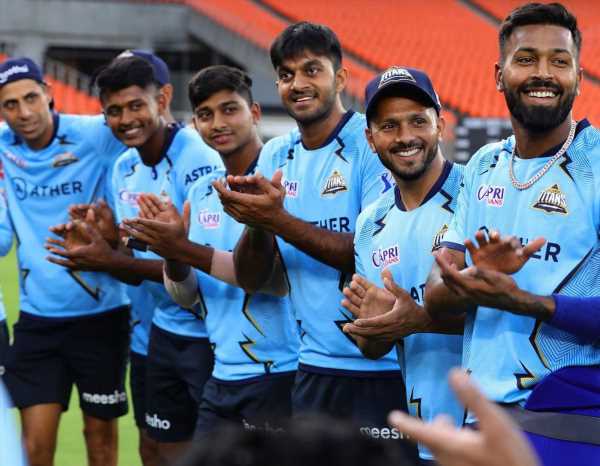 ‘The way he has been interacting with everybody, be it the masseur or the assistant manager or the driver of the bus, or the new players who have not been part of the IPL before, he is making an effort to reach out to them and give them confidence.’
‘That speaks a lot about the man that he is.’

Colonel Arvinder Singh is a busy man as he gets ready for Gujarat Titans’s IPL debut.

Gujarat Titans along with Lucknow Super Giants are the two new teams in IPL 2022, making it a 10-team affair from this year onwards.

Ever since CVC Capitals bagged the Ahmedabad franchise for Rs 5,625 crore (Rs 56.25 billion) in October last year, it has been a race against time for Colonel Singh — the Gujarat Titans chief operating officer — who bought all his experience into play to get the franchise up and running in a couple of months.

Taking charge of a new franchise is not new to the colonel, who was the COO at Kings XI Punjab in the first five years of the IPL. He then took over as the CEO for the Gujarat Lions, during its two-year stint in the IPL.

“There is nothing bigger than having fans at the stadium and the IPL happening in India. It is a great start, but we all have to be wary of the fact that we can’t take anything for granted. We have to be conscious of the fact that the damn disease is not out of the system,” Colonel Arvinder Singh tells Rediff.com‘s Harish Kotian.

You were the COO at Kings XI Punjab for five years from the start of the IPL in 2008 and then you were with Gujarat Lions during its two-year stint in IPL. That experience should come handy for Gujarat Titans as they begin their journey in the IPL.

The experience does help. The good part is that my initial foray was from the start of the IPL and then I handled Gujarat Lions, and that was under similar circumstances with less than two months to get a franchise up and running.

I have been handling the T10 league in Abu Dhabi for the last four years and here I am back in the IPL now with Gujarat Titans.

It has been very exciting and it is good to see that everyone at Gujarat Titans is pulling their weight to ensure that we are ready for the IPL. I was not ready to accept that we are a new franchise, so to say.

If people like me had been brought on board, then we can’t say we are starting afresh. Our team had the same amount of money, same amount of purse to buy players at the auction, and it was no different from the other teams.

So you will not find anything different here than in an any existing franchise, or that we are lacking in anything from any perspective, whether is it is sponsorships, whether it is digital space, whether it is launches, or the way the team is going to be run, all that.

I would say it is just a misnomer that it is a new franchise. If you have experienced people, both on the cricketing side and on the management side, then you won’t see any difference from the existing teams.

As you said, Gujarat Titans was up and running within a couple of months of the team being announced in the IPL. How difficult a challenge was it because among other things you had to prepare for the auction and also get the support staff on board?

You are right, but that comes with the territory. If you have taken on this responsibility, then time cannot be a constraint. The bottom line is that it doesn’t matter how many hours you are putting in, what matters is that at the end of it what are you putting in place.

That is why I am very happy with the way my team has reacted and the way we have been able to put in place what a franchise is expected to do. A part of it you have already seen so far, and you will see much more moving along. As the COO at an IPL team, what does your role include?

We function a little differently at Gujarat Titans. Vikram Solanki is the director of cricket, he handles the cricket side of it. He handles the team, he formulated the team, got them together, conducted pre-season camps, player bonding activities, etc.

So anything on the cricketing side is Vikram’s responsibility and anything apart from that like commercials, marketing, sales, PR, media, finance, and anything related to the franchise, that is handled by me.

Of course, both me and Vikram work in synergy to ensure that things function smoothly.

And for the backend I have a complete logistics team which has put everything into place, starting from small things like kits, flights, hotels, transport, etc. They handle everything and then co-ordinate with the team manager on the cricketing side.

Our whole aim on the management side while there is a business side to it, marketing side, legal side, financial side, PR side, logistics side, they all support the cricket team. So all of this is something that I oversee.

>My role is to ensure that the players get on the cricket field in the right manner, in the right dress, with the right food in their stomach, and all that.

And the cricketing side is entirely looked by Vikram and his coaching staff led by Head Coach Ashish Nehra.

How do you ensure that everyone in the team follows the strict COVID-19 norms in the bio bubble as a couple of cases could disrupt the entire season for the team if players test positive?

Absolutely, I couldn’t agree with you more. Everybody is conscious of this fact and everybody is aligned to the fact that you have to follow a very strict bubble.

The very fact that we have not been able to conduct the IPL in India proves how the situation was. And both at the BCCI level and the franchisee level, they want the IPL to be held in India.

Everybody is happy that the IPL is happening in India this year even though it is not happening on a home and away basis. All the matches are taking place in Maharashtra, but nevertheless it is still in India.

You can be rest assured that what the BCCI has put in place in terms of bio-bubble integrity managers, four of them with each team, and whatever system we have in place, the players will follow it.

When we selected the team hotel, we kept in mind as to how secure the bio-bubble can be at the venue. So from all the perspectives we have put everything in place to ensure everything goes on smoothly.

It is not easy for people to stay in a bio-bubble for two-and-a-half months, from a mental perspective, so to make them feel as close as possible to normal life we have put everything in place in the bio-bubble itself, like access to the swimming pool, gym, garden, recreation area, whoever wanted to bring their families they were allowed.

Moving from bubble to bubble is also important like when we move from the pre-season camp in Ahmedabad to Mumbai, we move in a chartered flight. All these steps are taken to ensure that we do not have any cases in our franchise, so whatever needs to be done it has been put in place.

If we all understand that we are responsible towards the franchise in terms of ensuring that we do not take any chances, that is the kind of culture that people have to understand and have understood.

Most of the players have been part of the bubbles for the past two years, but from our perspective whatever needs to be done has been done.

Tell us why Gujarat Titans went for Hardik Pandya as the captain. He has struggled with injuries and has lost his place in the Indian team. Do you believe he regain his best form in the IPL and also lead the team from the front with both bat and ball?

What stands out is his positivity and his leadership skills. Whenever I say leadership, he is not yet captain of the team on the ground, but more of that work has to be done off the field which will then reflect on the field as to how he is able to lead this team.

The way he has been interacting with everybody, be it the masseur or the assistant manager or the driver of the bus, or the new players who have not been part of the IPL before, he is making an effort to reach out to them and give them confidence.

I think that speaks a lot about the man that he is.

It is a big opportunity for him and his leadership skills are definitely going to stand out on the field. We are very excited and happy that he is leading the team.

Ashish Nehra has a huge task on hand as the head coach of the Gujarat Titans.

Ashish is a proven asset and he has some coaching experience with RCB earlier. He has played for a long time, so he understands the system, he has been part of coaching staff of a franchise, and he has now grown into the head coach of a franchise.

He is the kind of coach who likes to give people their space and deal with the individuals as individuals and then try and bring them together as a team. That is a great quality in Ashish.

This is a large group of players and they are going to be locked in together for nearly two-and -a-half months. IPL is such an intense tournament, so Ashish understands all of these.

Then you have Vikram, who has a sharp cricketing brain, and he along with Gary Kirsten and the rest of the coaching staff they make an excellent team.

You have been the CEO/COO for a couple of new teams before. How is the atmosphere in the team leading into a big tournament like the IPL? Is there any nerves or any pressure of expectation?

As I said earlier, this is a misnomer that is a team. Everybody is a new team this year. If they were allowed to retain four players, we were allowed to pick three which we did and some of existing franchises also retained 3 players, so there is nothing like a new team.

The pool from which you could access the players was same for all the 10 teams, whether they are a new or an old team.

Off the field, the very fact we have people who had done this earlier, we don’t have an excuse that we are a new team. There is no way we think that Gujarat Titans are a new team.

Our whole concept is very simple, we want to play high performance on the cricket field and off the field we want to keep the fans at the heart of everything we do.

The IPL is being held in India this year after nearly two years, plus we will have fans at the stadium. How big is that for the players and the teams?

There is nothing bigger than having fans at the stadium and the IPL happening in India.

I am sure that if things progresses well, then you will find more and more people at the stadium as the IPL goes on.

We would have loved to host the games at our home stadium in Ahmedabad, but we will do that next year.