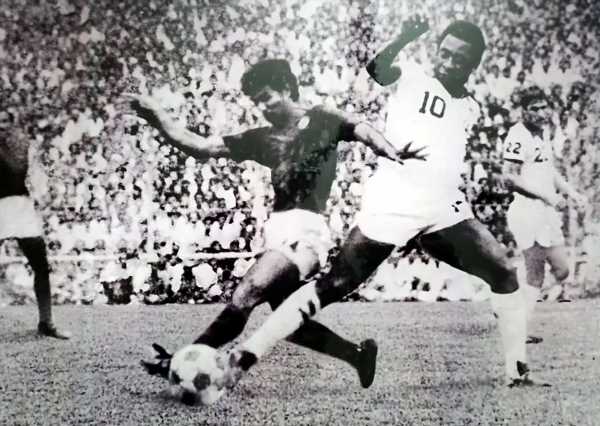 The enormous structured global advertising machinery that surrounds every football game on the planet today?
Pele was perhaps single-handedly responsible for all of it.
By just being brilliant, captivating crowds, and behaving like a being from the future, doing things that STILL provoke oohs and aahs from watchers.
Vaibhav Raghunandan salutes the Incomparable Pele. Dondinho and Celeste Arantes knew the importance of a name.

Growing up in abject poverty in Tres Coracoes, Brazil was hard, and a name was all a person had.

Electricity arrived in Tres Coracoes, in 1940, just a few weeks before the birth of their first child, a boy.

They decided to name him after the man credited with inventing the light bulb, Thomas Edison.

They didn’t literally name him ‘Thomas Edison’, but instead thought laterally and named the child Edson (full name: Edson Arantes do Nascimento).

Over time, this name fell into disuse, and later turned into the answer for a quiz question, hosted, of course, by Derek O’Brien.

Pele himself knew the importance of a name.

As he said himself in his autobiography (and many interviews later in life), the nickname irritated him, and often provoked anger and some fisticuffs.

Till finally, there was a stadium full of people singing the name, chanting it, as Pele, a teenager, transfixed Brazil football in the ’50s.

Till an entire planet knew it, saw the face in their heads as soon as the two syllables were up. This fame extended to India.

As if that’s even possible! Palekar is simply playing dumb, a man who loves sport, pretending ignorance to land the job.

The ruse falls apart within seconds, with Palekar almost immediately also admitting to reading a news article about Pele arriving in Kolkata to be greeted by 40,000 pagal (madmen) at the airport. Pelemania had gripped Kolkata two years before the film was released.

The football legend was part of the New York Cosmos team that played Mohun Bagan in a one-off friendly at the Bagan Stadium in 1977.

It is a story a huge number of people still live on — even get their booze on — in that city.

The game ended 2-2, with 80,000 people in the audience, Pele playing just half an hour (it was, after all, the last year of his playing career), not scoring but instead setting up a goal. He returned to India in 2015, the chief guest at the Subroto Cup, a school-level tournament organised by the Indian Air Force, annually.

Again there was pandemonium when he arrived, the press indistinguishable from the fans. And yet, the demographics of his fans had changed.

‘First someone must win three World Cups, then we can talk,’ were the words a senior football journalist uttered when confronted with the fact that, perhaps, with the emergence of Messi’s complete set, Maradona’s myth, Cruyff’s charisma and Cristiano’s goals, Pele was in danger of dropping out of the top five in the GOAT list.

First, someone must win three World Cups. That’s as many as Argentina. One more than France and Uruguay. Two more than Spain and England. Played four, won three.

Brazil, in fact, have only won two World Cups without Pele. Worth thinking about really.

It has become easy to dismiss Pele now for the generations that grew up watching colour television, Cartoon Network and in the shadow of the meme.

Pele has always been part of a great culture war, revered in some quarters but equally mocked in others.

Not hated, mocked, mind. Cristiano and Messi fans questioned his lack of game time in Europe, and therefore considered his stats padded. El Diego played it up in his own lifetime (granted Pele didn’t help the argument, always saying, albeit correctly, that Maradona did not have the maturity to handle becoming famous) decrying Pele for being a boss’s man.

But consider how this happened. Think about that poor black kid growing up in Tres Coracoes, in a house with a leaky roof, a dad who loved football and a mother who thought it wouldn’t give him stability.

The first team Pele played in were called the ‘Shoeless Ones’, because, well, you get it.

That team bought their kits by selling peanuts they had to steal off a freight train in the first place.

The first time Pele played in front of a stadium full of fans, he impressed them so much they threw coins at him.

He picked it up to take home to his mother. It’s irrational to expect that man, that boy to have the same attitude towards money as the rest of us. Every football fan, World Cup casual, Premier League diehard or I-League aficionado would do well to know that Pele, in almost every way imaginable, restructured the way football is viewed today.

That young teenager who scored in the World Cup final in 1958 (a record, it bears mentioning, only equalled by Kylian Mbappe in 2018, a whole six decades later), who bamboozled defenders not just with skill, but also with speed and intelligence, made the bosses of the Big Game sit up and think, ‘Oh well, you know, we could market this sport better’.

He was, and bear with us here, the first Black global sports superstar.

The enormous structured global advertising machinery that surrounds every football game on the planet today? Pele was perhaps single-handedly responsible for all of it.

By just being brilliant, captivating crowds, and behaving like a being from the future, doing things that STILL provoke oohs and aahs from watchers. Messi, Cristiano, Mbappe are geniuses, no doubt, and even geniuses fully realised. But there has never been a better time to become a football superstar.

The conditions are perfect. Global advertising backs even minimal potential.

Scouts, coaches, nutritionists, tactical analysts are at hand all the time. These guys, in many ways, were inevitable.

Pele, on the other hand, struggled to exist.

He was born when Brazilian sport was still fighting the colour barrier. And then he went on to invent the idea of an individual global sporting superstar.

Forget the goals, the records, the World Cups, the sheer numbers his achievements are always measured by.

Consider this fact. Brazil is a country notorious for rehashing footballer nicknames — and yet there is only one Pele.

He was the one footballer people who never watched a game of football knew and loved. Pele is immortal.