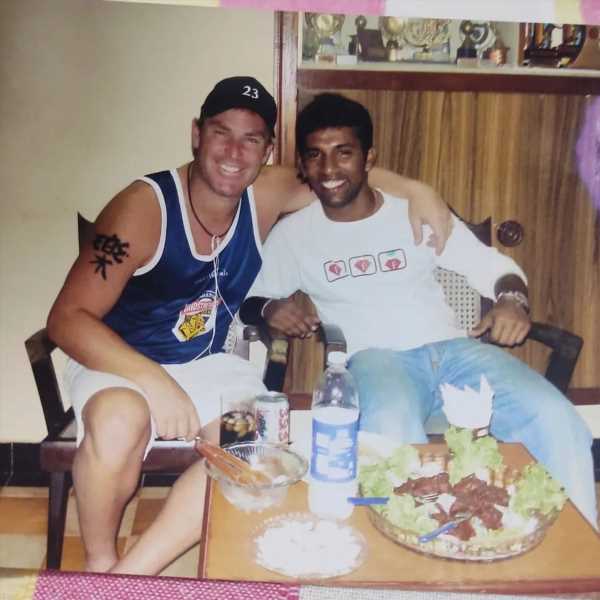 ‘I was not sure whether such a big player would come to my house but he was quite happy to visit my place… which was just unbelievable!’

Shane Warne’s sudden passing away on Friday, March 5, 2022, was a big blow for Swapnil Asnodkar, who was one of the star performers for the victorious Rajasthan Royals in the inaugural IPL edition in 2008.

The Goa opener smashed 311 runs at a strike rate of 133, playing an integral role in helping Rajasthan Royals win the first-ever IPL.

Asnodkar puts down Royals’s shocking triumph in the inaugural IPL down to Warne’s brilliant captaincy. The Australian legend, he remembers, did exceedingly well to rally the Royals after everyone had written the team off as RR started the tournament with three straight losses.

Asnodkar grew quite close to his cricketing hero during his four years at Royals from 2008 to 2011. The Australian spin great also visited Asnodkar’s home in Porvorim village in north Goa in 2008.

Asnodkar spoke to Harish Kotian/Rediff.com about his association with Warne, whom he fondly refers as “Warnie”, during his time at the Rajasthan Royals.

You spent a lot of time with Shane Warne at the Rajasthan Royals during four seasons of the IPL from 2008 to 2011.

It (his death) is a big shock for me. I had kept my mobile for charging and when I opened it after some time I saw all my friends sending me news of Warnie’s death.

I thought maybe it is some fake news, but later when I saw Virender Sehwag and others tweet about it, my worst fears came true.

Were you in touch with Warne regularly after you last played the IPL in 2011?

Recently, I was not in touch with him. I must have spoken to him last around 5-6 years back. I had texted him that time, but after that we didn’t speak. I was very happy that he wrote about me in his autobiography No Spin.

I used to wish him on his birthday and all that, and he used to reply back.

Tell us about Shane Warne’s impact on your career because you were relatively young during the inaugural IPL in 2008 and not many Indians were aware of T20 cricket back then.

As a youngster back then, it was a dream come true for me to share the dressing room with a legendary player like Shane Warne.

He was one of my favourites. Playing along with him, travelling with him, sitting in the same dressing room, it was a very big thing for me.

The IPL was new back then and it was something different because we were not used to meeting and greeting foreign players. You got a chance to share the dressing room with India’s legends during tournaments like the Duleep Trophy or Irani Trophy ,but in the IPL you had a chance to play alongside greats from other countries like Warnie.

Do you remember any conversations with Warne during your time at the Rajasthan Royals?

When I met him for the first time, when we had started the camps ahead of the IPL, he saw me batting in a couple of practice games. I had got some runs in those games so Warnie had an idea of the kind of player I was.

He had told me to ‘keep preparing because I will play you in any of the matches, I won’t tell you which so just be ready and prepare.’

He had seen something good in me or he had some insight about me. That is the reason he was backing me.

Obviously, getting confidence from the captain was a big boost not just for me ,but for all the young players at Rajasthan Royals.

Shane Warne visited your residence in Goa during the IPL in 2008. How did that happen?

We had a small break for 4-5 days during the IPL and the Rajasthan Royals team had come down to Goa for a holiday.

We were staying at a five-star hotel in Candolim and my house was 10 minutes away from there in Porvorim.

I just asked him if he would visit my house and to my surprise without any hesitation he accepted my invitation.

I was not sure whether such a big player would come to my house, but he was quite happy to visit my place… which was just unbelievable!

He was so gracious and down to earth.

Warnie and the other Rajasthan players visited my house in Porvorim for a couple of hours in the evening.

He had told me specifically not to tell everyone in the village to avoid the crowd so only my family and a few close friends were at my house when he came.

He spent a couple of hours at my place and my whole family was delighted with his visit.

Yesterday, when they saw the news of his death, they were all very shocked. But those memories of him visiting my house in Goa will stay with me forever. 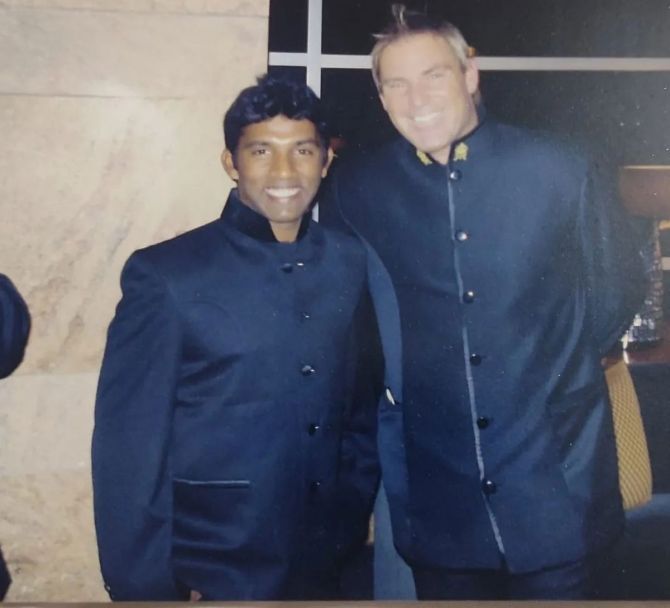 Tell us about Warne’s captaincy during the IPL in 2008 because against all odds he led a bunch of little known players all the way to the title.

After we lost the first three games, no one gave us a chance of winning the IPL title, forget the title even getting to the knockout round.

Everyone had written us off, they were all saying, ‘This team can’t go anywhere, only Warne can’t win matches for them.’

Only Graeme Smith was the top player at that time, even Shane Watson was pretty new then and among the Indian players we had Munaf Patel and Mohammad Kaif.

People were not expecting much from us, they were all saying that we will finish last in the group.

But the kind of atmosphere Warnie created, that was amazing. Despite losing the first three games, he made sure we were intact as a team, we never drifted apart.

He wanted us to stick together as a family and back our instincts at all times.

Even in practice sessions he wanted us to express ourselves. He always said at the end of the day when you are standing in the front of the mirror in your hotel room, you should be able to say proudly that you have given 100 percent on the field.

This is the kind of attitude he was trying to instill in us, and I think that worked for us. Once we started doing well, we started gelling together, we were enjoying each other’s success and that is how we managed to turn things around.

It was a dream come true moment for us as we went all the way to win the IPL title, it was just unbelievable.

How was Warne off the field?

Warnie was a very jovial guy off the field.

He was every approachable. He was a very simple guy as I said earlier.

He had his own private moments when we were not allowed to meet him. But apart from that, he gave the players a lot of his time, he was constantly talking to them.

He was always interested in knowing more about Indian culture, the food and all that.

Earlier, he had come with the Australian team, but this time he got a proper feel of Indian culture as he spent a lot of time in the country during the IPL.

Indian fans also showered a lot of love on Warnie and the Rajasthan Royals. They loved him a lot.