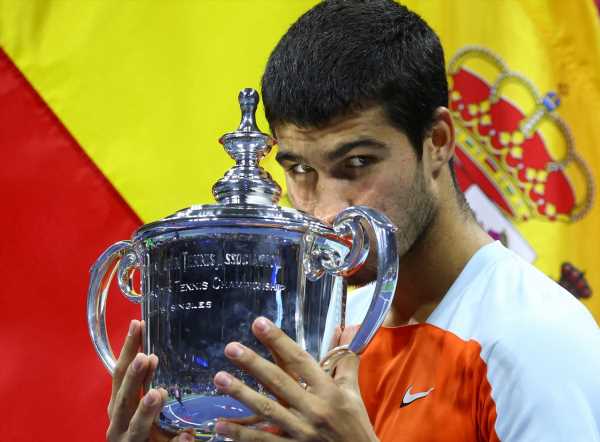 Spain hope new world number one Carlos Alcaraz will be ready for their Davis Cup Finals group stage ties in Valencia this week.

The 19-year-old, who became the youngest player to top the ATP rankings when he won the US Open on Sunday, was due to join Sergi Bruguera’s squad on Tuesday.

“He’s going to come here on Tuesday and hopefully he’ll recover as soon as possible to play,” Bruguera said.

“At the moment I can’t confirm anything until he arrives, let’s see how he is and talk to him. The main thing is that he tells us how he is.”

Spain face Serbia on Wednesday and will also play South Korea and Canada in Group B with the top two nations going ahead to the eight-team showdown in Malaga in November.

Bruguera, twice a French Open champion, said he was not surprised that Alcaraz had begun his Grand Slam title collection.

“We all knew it was going to happen sooner or later. But the way he won three matches in five sets is an incredible effort mentally as well as physically,” Spain’s captain said.

“Being the youngest ever number one. There are no words.”

There is no chance of Alcaraz coming up against Novak Djokovic as the 21-time major champion has withdrawn for personal reasons.