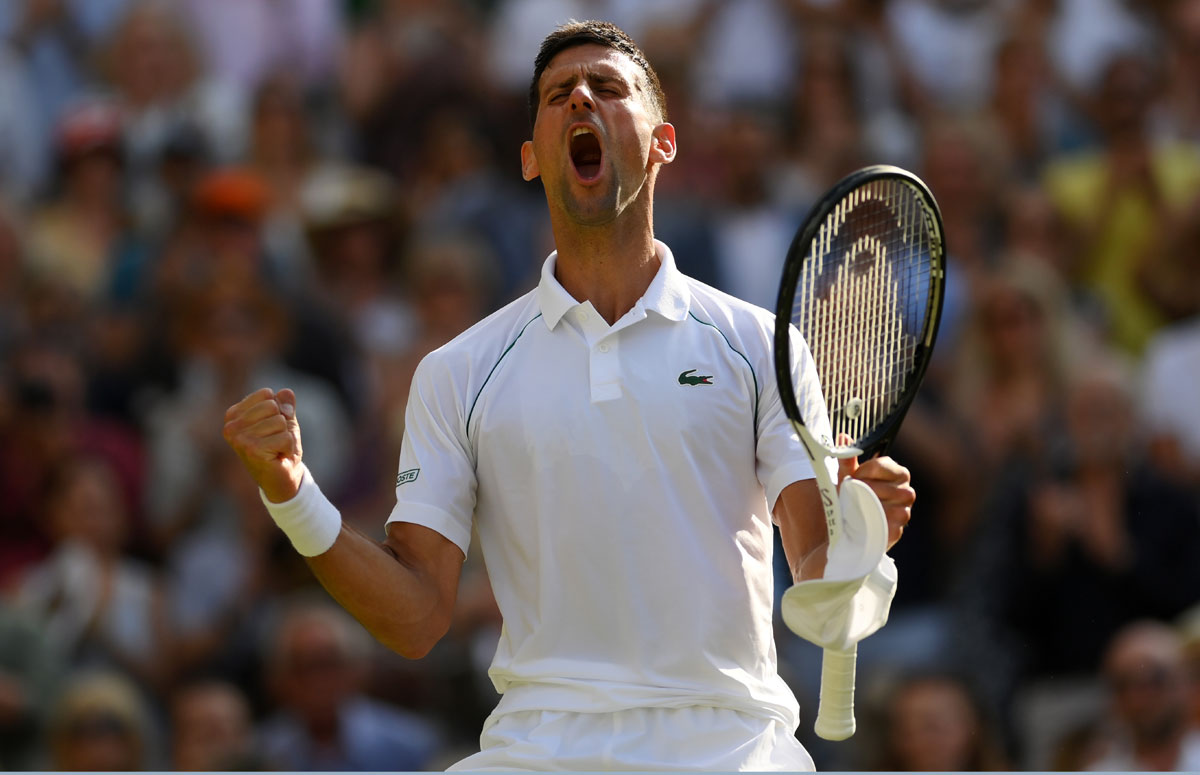 Top seed Novak Djokovic set up a blockbuster Wimbledon final against Nick Kyrgios after recovering from a torrid start to overwhelm Britain’s Cameron Norrie 2-6, 6-3, 6-2, 6-4 on Friday.

For an hour on a sun-baked Centre Court, inspired ninth seed Norrie outshone the 20-time Grand Slam champion and looked capable of a huge upset in his first major semi-final.

The partisan home crowd roared its approval as Norrie capitalised on a rash of errors from a tense-looking Djokovic to win five successive games and take the opening set.

Djokovic, bidding for a fourth successive Wimbledon title and seventh in all, found his usual rhythm though and gradually seized the initiative as Norrie’s level dropped.

From the moment the Serbian broke Norrie’s serve in the eighth game of the second set it was one-way traffic. Norrie battled hard in the fourth set as the crowd found its voice again but ultimately could not resist Djokovic’s march into a men’s record 32nd final from 68 Grand Slam events.

Australian Kyrgios, handed a walkover in the semi-final by injured Spaniard Rafa Nadal, now stands between the 35-year-old Djokovic and a 21st Grand Slam title.

Djokovic, who received a few boos after gesturing at a heckling fan after match point, admitted he had struggled to get to grips with Norrie early on.

“I didn’t start off well and he was the better player for the first set,” Djokovic, who has now won 27 consecutive matches at Wimbledon dating back to 2017, said.

“In a Grand Slam semi-final, there’s always lots of pressure and expectation, Cameron didn’t have much to lose and he was playing the tournament of his life.

“I got a lucky break at 4-3, he kind of gifted me that game, and then the momentum shifted a little bit.” New Zealand-born left-hander Norrie was long odds to become the second British man in the professional era to reach the Wimbledon singles final.

They were being slashed after a surprising first set in which Djokovic, contesting his 11th Wimbledon semi-final, laboured in the face of Norrie’s depth and accuracy.

A huge roar erupted around the court and on the adjacent hill where thousands watched on a screen as Norrie won a net exchange to break serve in the opening game.

Djokovic replied immediately but his precision game looked badly out of sync as former US college player Norrie romped to the first set. Djokovic is an old hand at dealing with adversity though and after changing his racket and donning a white cap he transformed into his metronomic self.

Norrie saved break points at 1-2 and 2-3 in the second set but Djokovic kept probing and Norrie missed an easy volley at 3-4, then a forehand, to concede serve.

Djokovic slipped 0-30 behind as he served for the set but reeled off the next four points to level the match. Norrie shanked a forehand over the baseline to drop serve at the start of the third and Djokovic seized control as hopes of an upset melted away in the sun.

The crowd tried to revive Norrie with chants of “Let’s go Norrie, Let’s Go” in the fourth set but it was in hope rather than expectation as Djokovic turned the screw.

He will need to start better against Kyrgios on Sunday with the Australian leading their head-to-head series 2-0.

“The job is not finished,” he said. “One thing is for sure there are going to be a lot of fireworks emotionally from both of us. I’ve never won a set off him. Hopefully it can be different this time.”