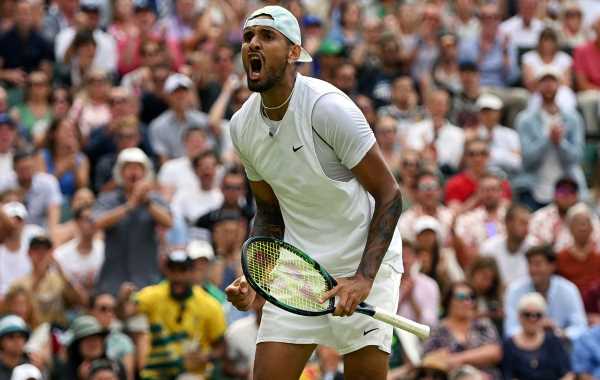 Images from Day 8 of Wimbledon 2022 at the All England Lawn Tennis and Croquet Club in London, on Monday. 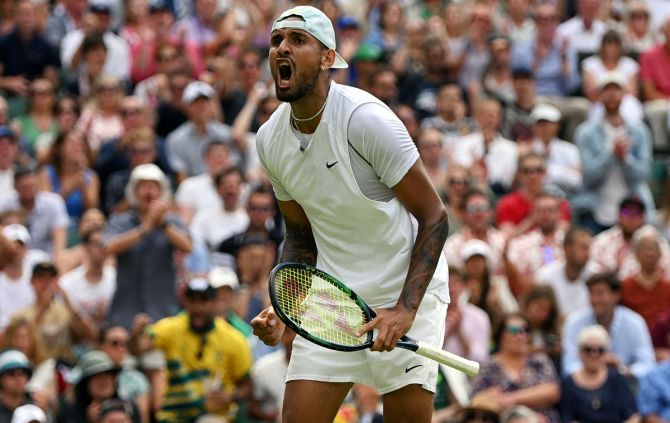 An angelic Nick Kyrgios reached his first Grand Slam quarter-final for seven years when he recovered from a slow start to beat steady American Brandon Nakashima in five sets on Wimbledon’s Centre Court on Monday.

With Kyrgios’s bad-tempered Court One victory over fourth seed Stefanos Tsitsipas still the talk of the town, the Australian was on his best behaviour in front of the Royal Box as he ground out a 4-6, 6-4 7-6(2), 3-6, 6-2 win.

Unseeded Chilean Cristian Garin awaits in the last eight, offering Kyrgios a golden opportunity to surpass his quarter-final run at Wimbledon on his debut in 2014.

After the mayhem of Saturday, when Kyrgios was accused by Tsitsipas of being a bully, he let his tennis do the talking against the 20-year-old Nakashima, barely uttering a word in anger throughout a contest that contained few of the fireworks usually associated with the Australian.

If anything the world number 40 looked subdued in the opening set and appeared to be bothered by a stiff shoulder.

Two forehand errors at 4-5 gifted Nakashima the opening set as Kyrgios looked in danger of an anti-climactic exit.

But he broke serve for 2-1 in the second set and, after having treatment on his shoulder, gradually cranked up the power to level the match.

Nakashima’s focus was total as he kept his nose in front in the third set and he came within two points of taking the set when Kyrgios again served at 4-5.

This time Kyrgios served his way out of trouble and he turned on the style to race throughout the tiebreak.

Kyrgios suddenly went off the boil and he was broken twice in succession as Nakashima took it into a decider but he fired himself up to race away to victory.

Serving for the match, the 27-year-old recovered from 0-30 down and sealed the victory with a silky volley winner. 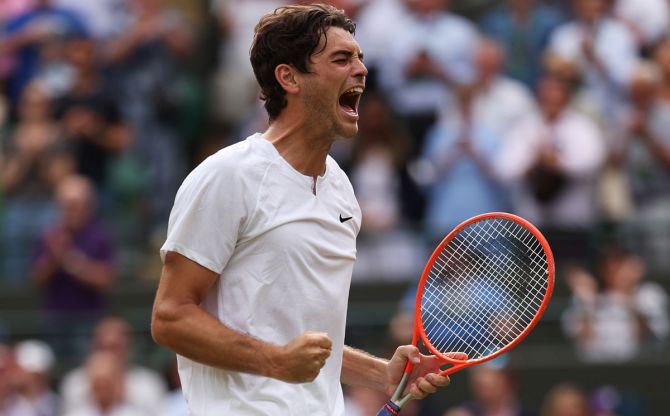 Until Monday, Wimbledon’s 11th seed Taylor Fritz was not even the best tennis player in his own family.

But with some hefty swipes of a garish coral-coloured racket on Court One, the American finally earned his family stripes by reaching the quarter-finals of the grasscourt Grand Slam.

His 6-3, 6-1, 6-4 win over qualifier Jason Kubler put him into the last eight at Wimbledon, and saw him match the Grand Slam feat of his mother who, as Kathy May, reached three slam quarter-finals in the late 1970s.

“My first Grand Slam quarter-final, that’s really a big deal,” the 24-year-old Fritz said before leaving court. “Part of the final eight and… I’m glad I could get the win on the Fourth of July, being American.”

It was a muscular and domineering display from Fritz, champion on grass at Eastbourne coming into this tournament, and the outcome was never really in doubt from the start with the gulf in class only yawning wider as the match progressed. Australian qualifier Kubler had already written another chapter of his remarkable success-in-the-face-of-adversity fairytale by reaching the second week. He has survived six knee operations to further his career but just ran out of steam and Wimbledon road.

Having beaten Kubler, the player known as “the right-handed Nadal”, Fritz could next face the real deal, with Spain’s second-seeded Rafael Nadal a possible last-eight opponent.

Garin into quarter-finals after epic battle 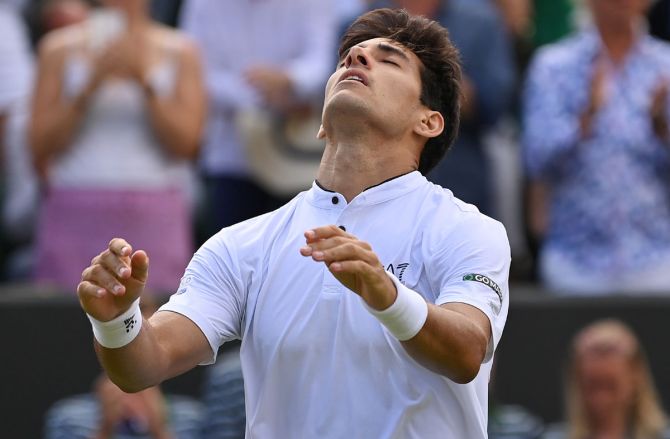 The two men hammered at each other from start to finish with a crowd-pleasing sprinkling of classy drop shots and volleys in among the relentlessly accurate groundstrokes and lung-busting chases to reach them.

De Minaur, a supreme athlete who does not know the meaning of a lost cause, took the first two sets and led 3-0 in the third but Garin hit back, saved two match points at 4-5 in the fifth and then won the new “first to 10” final-set tiebreak to set up a last-eight meeting with Nick Kyrgios.

“I just gave everything I have, it was a very tough fight,” said Garin. “I am exhausted. I just gave my best, I went to the net and tried to be aggressive with my serve as well — I think that was the key.” 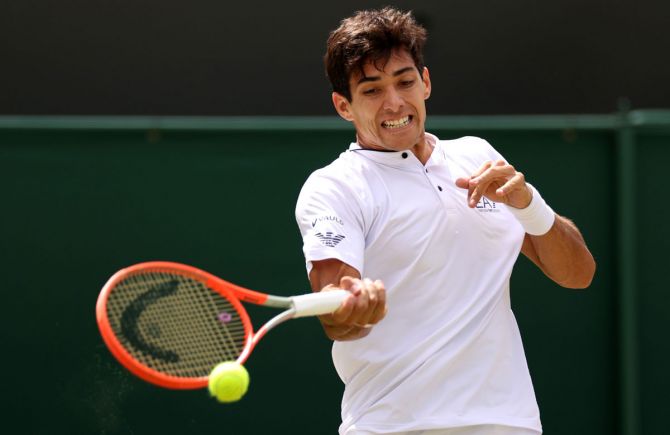 Di Minaur had won all three of their previous meetings, including on the grass of Eastbourne last month, and looked in charge as he took the first set reasonably comfortably and, though forced to work harder, added the second.

Garin sank to his knees in despair after missing a golden opportunity to break for 5-4 in the third but regained his composure admirably to dominate the tiebreak.

Buoyed up, he broke in the opening game of the fourth set and off they went again, each man probing wide and deep in attack then working desperately hard in defence.

Garin seemed to have the momentum with two breaks and though he missed three break points on De Minaur’s serve he made sure on his own to set up a decider that had looked distinctly unlikely two hours earlier.

Garin broke to love in the first game of the fifth set, only for De Minaur to do the same before both men settled back into their more familiar routine.

Unsurprisingly, given his relentless court coverage, De Minaur initially appeared to tire in the fifth but he too found a second wind in a series of enthralling games where Garin had to work desperately hard to hold serve, no more so than when saving two match points at 4-5.

De Minaur responded in kind by saving two break points and, almost inevitably, the match went into a tiebreak. It was nip and tuck to 5-5 before Garin claimed four points in a row to set up the biggest win of his career.

“It’s so special,” Garin said. “I’ve been working hard all my life to be in this position. Wimbledon is a dream for me — I always said that it is my favourite tournament.” Kazakh 17th seed Elena Rybakina hit twice as many winners as unseeded opponent Petra Martic of Croatia on Monday to progress to her maiden Wimbledon quarter-final with a 7-5, 6-3 victory.

The 23-year-old Rybakina, who switched to playing for Kazakhstan from Russia aged 19, hit 26 winners in the opening contest on Court One while committing five fewer unforced errors than the 80th-ranked Martic to control the match.

Rybakina, who reached the fourth round of the grasscourt Grand Slam on her debut last year, will play either France’s Alize Cornet or Ajla Tomljanovic of Australia for a place in Thursday’s semi-finals.

“It means a lot to me (to be in the quarter-finals),” she said on court. “It’s an amazing tournament and I was watching on TV when I was a kid so it’s a dream to play on such courts. I’m just happy to go forward and we will see how it goes.”

Rybakina, whose previous best result came at the French Open last year when she reached the last eight of the claycourt Grand Slam, started strongly on Monday to race to a 3-0 lead.

Martic rallied to reel in the next four games to put her nose ahead in the match only for the Kazakh to break back immediately to level things. Rybakina then got the crucial break in the 12th game to take the first set.

The second set stayed on serve till Rybakina cracked Martic’s delivery in the sixth game and it proved enough for her to seal the win in an hour and 20 minutes.

“It wasn’t easy at all and I want to say thank you to everyone who came to watch. The atmosphere is really amazing and I was playing for the first time on this court,” Rybakina said.

“Of course I was nervous, but I started well and Petra started a bit slower and made some mistakes, then she raised her level a bit. I was trying to focus on every point and I’m very happy I managed to win that first set.

“I’m serving really well this week and hopefully I will continue to do so. It’s a great advantage for me.”