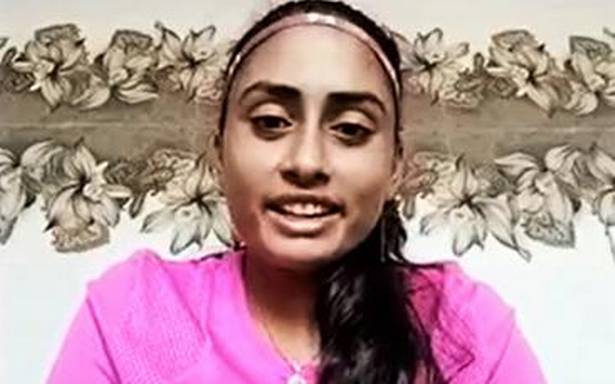 More so because she was laid low by COVID-19; is confident of her career ahead

Back home in Mumbai, Akanksha Nitture does not get to play on clay. When she decided to compete in the National junior championship on clay in Chennai, Akanksha was taken to Pune by her coaches to get used to the surface.

“Initially, we could not play for about three months owing to COVID. I had COVID. All of us in our family were affected. Coming out of that and winning this is an achievement,” said the 18-year-old Akanksha, about her singles and doubles titles in the Nationals.

In a conversation with Olympian Vishnu Vardhan, a stakeholder in Tennishub which sponsored the National junior championship, Akanksha recalled how the weather was quite challenging in Chennai. Owing to rain, she had to play one of the matches on hard courts.

“It was tough to switch between two surfaces, but somehow we managed,” said Akanksha.

Quite a bubbly personality, Akanksha said that she would dedicate the title to herself, for all the hard work she had endured, apart from her parents “for all their sacrifices” and the coaches at the ASA Academy in Navi Mumbai “for believing in me”.

She was particularly happy with the coaches for playing with her to generate a high standard of training sessions.

Ranked 29th among the women in the country, Akanksha, quite a smart player on court, said that she would continue to play more tournaments in the professional circuit to get better.

Tennis may take her to many places and allow her to sample different cuisines, but Akanksha was clear that there was nothing to match “ghar ka khana” (home food).