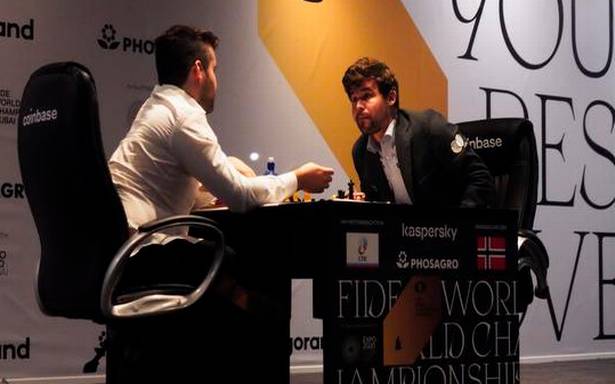 As anticipated, Magnus Carlsen ended Ian Nepomniachtchi’s agony with three games to spare after winning the 11th game of their best-of-14 game World chess championship match in Dubai on Friday.

Carlsen punished Nepo’s blunder, committed on the 23rd move, with a tactical plan and eventually finished the job in 49 moves. The champion’s fourth victory — second with black — left the final score reading 7.5-3.5.

This was the fourth time Carlsen defended the world title he first won from Viswanathan Anand in 2013. He overcame the challenges of Anand (2014), Sergey Karjakin (2016) and Fabiano Caruana (2018) before destroying Nepo.

After five drawn games, Carlsen pulled off a 136-move victory in the sixth. Thereafter, it was clear that Nepo was not the same. He committed one pawn-move blunder three times in the next five games and the result was a premature end to the match.

“I’m relieved, of course. It’s hard to feel that great joy when the situation was so comfortable to begin with, but I’m happy with a very good performance overall,” was Carlsen’s initial reaction after winning his fifth world title.

“I didn’t expect it to go quite like this,” said Carlsen during the post-match media conference and continued, “I think it was just a very good professional performance overall. No regrets at all, just very satisfied.

“I guess it’s the most similar to my first match with Anand (in 2013), which was quite even and nervous at the start, When I got my first win, it was kind of the same story: it was relatively clean from there on out.”

On Friday, after Nepo employed the Italian opening, the game progressed on expected lines. Once Nepo erred on the 23rd turn, Carlsen took just 79 seconds to spot the precise continuation. He immediately traded his rook for a knight and took it back by force following the exchange of queens. He reached a rook-and-pawn ending with an extra pawn. Carlsen sacrificed the rook to ‘queen’ his pawn and then forced the resignation, four moves later.

On his part Nepo said, “In my career I lost quite some stupid games but not as many in such a (short) time”.