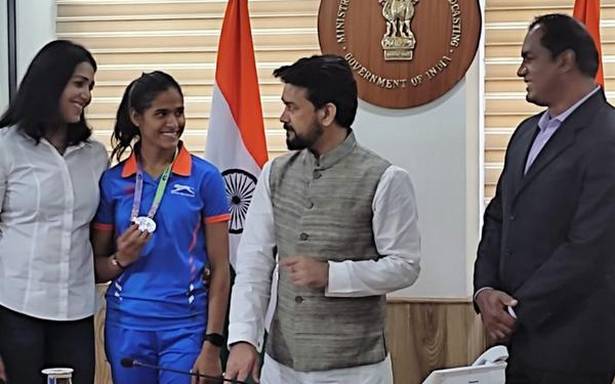 It was felicitation time on returning home for the young Indian team that bagged two silver medals and a bronze in the World Junior athletics championship in Nairobi.

The Athletics Federation of India (AFI) and Union Sports Minister Anurag Thakur felicitated the athletes and assured them that every effort would be made to provide the best possible support to help them excel in the international arena.

“We see hope in you, not just medals. You are an inspiration for others. You have done a tremendous job in winning laurels even during pandemic. I assure you that there will be no compromise in supporting your sporting journey,” said the Sports Minister.

“First it was Neeraj Chopra’s gold medal in the Tokyo Olympics. Now, the juniors have returned with three medals from the World Championships. It is an indication of the meticulous planning by the Federation,” said World Championship medallist and AFI vice president, Anju George.

Anju’s husband, coach Robert Bobby George, was all praise for long jumper Shaili Singh executing a fine effort for her silver medal, “despite it being her first international competition”.

Bobby George also felt that parents needed to tune their mindset about sports, if the country was to develop a sports culture.

“Parents have to look at sports as important as academics,” he said.

The Chairman of the AFI Planning Committee, Dr. Lalit Bhanot, was proud about the federation conducting “14 national level and zonal meets in 2021,” despite the challenges posed by the pandemic.

On behalf of the athletes, Shaili said that sports was gaining huge prominence in the country and that recognition of performances was boosting the morale of the athletes.

Race walker Amit Khatri had won the silver medal like Shaili, and the mixed relay team of Barath Sridhar, Summmy Kaliravan, Priya Mohan and Kapil had won the bronze. Triple jumper M Donald and another athlete Abdul Razzak were also present at the felicitation.