Larger-than-life fun and froth are Karan Johar’s mainstay.
It’s his ability to surprise in places he’s least expected to that make him more versatile than he lets on.

Karan Johar is a world within a world. And it’s always buzzing with energy.

Born to Hiroo and Producer Yash Johar, Karan was just another roly-poly industry child hobnobbing with other industry kids from an arm’s distance in South Bombay.

It is only while assisting Aditya Chopra on Dilwale Dulhania Le Jayenge, where he appears in a teeny role as Shah Rukh Khan’s classmate, that Karan realised this is the path he wants to follow as well.

Until his entry, Bollywood directors enjoyed a strictly behind-the-scenes significance.

But ever since the release of his blockbuster debut Kuch Kuch Hota Hai in 1998, spotlight and he are synonymous with one another.

One individual, endless action — directing star-studded bonanzas, running a production house, judging talent on reality television, hosting catty, controversial celebrity chat shows, penning a tell-all autobiography, exploring businesses outside film in the world of food and fashion, turning private gossip sessions with gal pals into a Netflix series, grooming and launching star kids, dodging nepotism charges, sharing adorable clips of his twins and their Toodles tales, pouting in kitschy designer labels all over Instagram, throwing the poshest parties in town, featuring on every star’s speed dial or finding his name pop first in any and every controversy — KJo is always on the go.

Extravagance and emotion, wisdom and wit, stardom and socialising, candour and chutzpah — the multitasker is a complete package and knows it too.

No wonder his onscreen showmanship reflects his offscreen frenzy and feverish excesses to the core.

On his 50th birthday on May 25, Sukanya Verma celebrates the man and his movies across 25 dazzling frames.

Even if you don’t buy into Karan’s ideas of love and friendship as interchangeable aspects of one another, the palpable affection between best friends Rahul and Anjali — portrayed by one of the greatest romantic jodis, Shah Rukh Khan and Kajol — is precious to witness.

Among some of my favourite frames from Karan’s debut, there’s one involving their hand clap game that ends with a little nose flick.

It’s not the first time they are doing the gesture, but its impact is felt most wholeheartedly against a golden Mauritius sunset.

Cinematographer Thundiyil’s lovely use of depth of field render the visual extra special when SRK, Kajol, Rani Mukerji feel the first throes of love and declare their Kuch Kuch Hota Hai state of mind before the camera.

Moments before her wedding, Kajol stands on the balcony in hope of catching a toota taara.

Just as she turns, a shooting star whizzes behind her back while the one she wished to see is standing right before her.

All the zillion emotions on her face and the sheer timing and irony of it all has me sighing out loud.

In Kabhi Khushi Kabhie Gham, Karan played to his strengths, but also maximised the scale of his vision.

This wasn’t a mere sophomore offering, this was a showman in the making.

SRK getting off the private family jet and running towards his palatial home as part of his highly dramatic introduction scene is a case in point.

A fancy manor in Buckinghamshire is passed off as Delhi and SRK flies off all the way to Egypt to flaunt his signature pose. KJo’s fantasy world drew tremendous inspiration from Yash Chopra.

Before parodying this quintessential Bollywood tendency in Ae Dil Hai Mushkil, Karan played it up to the hilt in Kiran Deohans’s spectacular picturisation of Suraj Hua Madham.

One of the most loved Bollywood pairs of all time looking on at a potentially next big jodi, it’s a nice touch.

Two decades down, we are still waiting to see Hrithik Roshan and Kareena Kapoor come together in a film worthy of their calibre and chemistry. 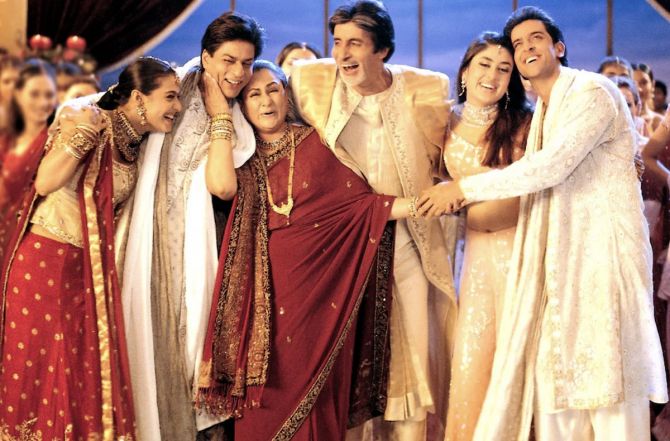 K3G may be all about loving the parents but its style and stardom remain its biggest takeaway.

I like the energy of this glitzy, glamorous, glorious frame featuring its famous cast members and the unabashed escapism it encapsulates.

It’s no joke to make the audience laugh, but it’s not easy to make them cry either.

K3G has tons of scenes aimed at turning on the waterworks that are ridiculously fun to spoof on years later.

But what it really highlighted about Karan early on is his storytelling authority and emotional rhythm, which rarely hits a false note.

Be it SRK experiencing ‘palat‘ of a different kind when mom (Jaya Bachchan) and son are reunited after years at a London mall.

Or the sentimental reunion between brothers Shah Rukh and Hrithik on the bench.

There’s something serene about these frames until they start bubbling in poignancy.

I found KANK‘s so-called bold take on adultery too whiny, too demure and too contrived for my liking. But I cannot deny its easy on the eyes and boasts of an excellent soundtrack by Shankar-Ehsaan-Loy.

Mehta lovingly captures New York City in all its moods and mausams.

But this autumn hued visual of SRK serenading Rani in the heart of Central Park is an absolute showstopper.

Student of the Year
Director of Photography: Ayananka Bose

Gloss is KJo’s middle name and he takes it a notch higher in Student of the Year, which launched the careers of Alia Bhatt, Varun Dhawan and Sidharth Malhotra.

There’s no shortage of eye candy in his super posh school, populated by super chic learners.

Superficial as it is, KJo humours the premise with cheek and creativity.

Like this frame depicting Alia as goddess of high end fashion and haute couture.

Until now, Karan’s cinema viewed the world through rose-tinted glasses.

But his segment Ajeeb Dastaan Hai Yeh in the anthology, Bombay Talkies, which talks about repressed homosexuality and sham marriages, marked a complete change of pace and revealed a rare intimacy, complexity and rawness.

And the once-upon-a-time-in-Bombay quality of this subdued frame, concealing one’s bottled up deception, another’s comfort in denial is hardly the stuff of happily ever after.

And this ode to ‘tedha love‘ between Ranbir Kapoor and Anushka Sharma caught in a can’t-live-with-or-without-you flux is perfectly captured in this picture perfect moment of Ae Dil Hai Mushkil.

What makes it meaningful is the relatability of Ranbir-Anushka’s spontaneous connection, and the protective instincts their tender bond evokes.

Like I wrote in my review, the passion wrapped under all that gorgeous fashion is tangible and heartfelt.

Use of pop culture dialogues for laughs is no biggie.

But few have lived up to its spirit and imagery as irresistibly as Karan’s masterful ode to that awesome Anarkali line — ‘Kaanton ko murjhane ka khauf nahi hota‘ — as a metaphor for Ranbir’s prickly heart condition.

If Anushka is the sukoon, Aishwarya is every bit the stuff junoons are made of.

It’s easy to see why Ranbir is almost in awe of this sensual sleeping beauty.

My Name is Khan
Director of Photography: Ravi K Chandran

Karan’s flamboyance often overshadows his willingness to step out of his comfort zone.

Even if somewhat overzealous in its endeavour, My Name is Khan showcased undiscovered facets of his film-making without going stingy on the budget.

One of his best shot movies, Chandran’s muted, meaningful frames linger on in the subconscious long after you’ve left the theatre.

Like that image of SRK, playing a man with Asperger’s syndrome, holding a board that offers to ‘repair almost everything’ on a desolate highway.

In retrospect, the drama’s keenly Muslim identity and pacifist stance on communal matters as well as racial is the only time Karan conveyed something remotely political before attempts were made to shut him down.

A lone SRK wearing his religious identity and sitting away from the crowd speaks more than a thousand words.

Though devoid of Karan Johar’s usual indulgences and colour, MNIK lets go every now and then. SRK being SRK.

College days are well behind Rahul and Anjali but a pop of colourful balloons is a playful reminder of SRK-Kajol’s spirited camaraderie against a scenic San Francisco neighbourhood.

Except the problems keeping them apart now are far more complicated and hopeless in nature.

My Name is Khan notes their stark solitude in stunning, dramatic detail.

Sometimes it takes a simple doodle to impart a profound lesson in humanity. And in a climate of intolerance, its need feels more than ever.

It’s his ability to surprise in places he’s least expected to that make him more versatile than he lets on. 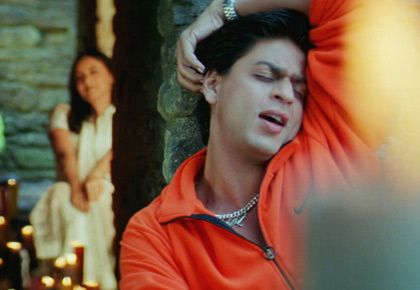