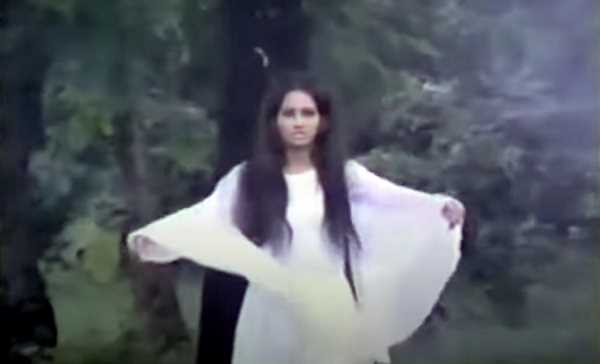 Rahul Dev Burman’s collaboration with Asha Bhosle and Kishore Kumar was unique, but he saved his best for Lata Mangeshkar.

Once, when I shared Nayyar’s remark with Lataji, she had replied, “RD used to interact a lot with me. He used to call me Didi, and loved me like a sister. He used to pour his heart out to me. He did compose in a special style for me. He knew instinctively which song suited Asha and which suited me.”

This haunting melody from the flop 1974 suspense thriller featured a magnificent binary-voiced ghost song where Lataji‘s voice was used twice over, and it soars even higher than the summits she normally scales in her singing.

The composition’s scaling and execution is extraordinarily evocative.

Sometimes you wonder how R D Burman created a tune so magical, so pitch perfect.

This was especially true of his songs for Lataji.

RD’s experiment of two voices of the same singer in one composition is vividly conceived and executed in this song that Reena Roy lip-synced on screen. Even Lataji did not remember this luminous lyrical masterpiece composed by R D Burman for a 1980s’ potboiler. When I played it for her she was, for a change, impressed by her own song.

It is a truly heartbreaking love ballad, remarkable for the way it expands on the theme of heartbreak, using Anand Bakshi’s anguished words, to show what a one-way street love can be for those who don’t get it back.

Incidentally, R D Burman was agonised by the obscurity this love ballad had to face due to inept marketing. We would have never known about this song were it not for Anand Bakshi’s son Rakesh, who has the only recording of this song.

Wistfully worded and authoritatively composed by Burman, the tune finds Lataji reaching into the innermost recesses of the words to ferret out feelings that only she knew how to express. In 1973, Producer Gulshan Rai teamed up with his Johny Mera Naam pair Dev Anand and Hema Malini for this crime drama, which bombed at the box office.

But what an imperious music score R D Burman created in Joshila.

Lataji‘s Mehfil Mein Chupane Pade stands out as it is the only R D creation for the Nightingale, which has no orchestral support.

The entire song is rendered without any accompanying music. What songs R D Burman created for Lataji in this Gulzar film!

Though Sili Hawa Choo Gayee is a universal favourite, my personal favourite is this solo where Gulzarsaab compares the resurrection of love to a branch of a tree, providing shade.

What a glorious ode to love!