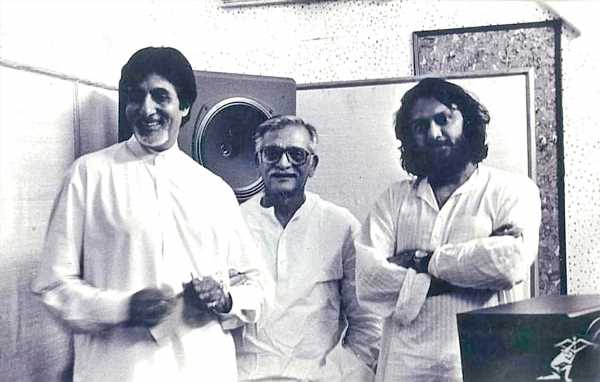 ‘Working with him is like deep sea diving.’
‘He is an ocean into which you keep diving, discovering something new every time.’

They started out doing commercials, moved to music videos, then broke ground with the revolutionary film, Aks.

Today, Rakeysh Omprakash Mehra openly admits that like a child gives birth to a mother, Amitabh Bachchan gave birth to the director in him.

As we celebrate the legendary actor’s 80th birthday in an ongoing series, Rakeysh Omprakash Mehra tells Rediff.com Senior Contributor Roshmila Bhattacharaya, “I’ve been learning from Amitji all these years.”

‘He laughed away my doubts, saying, “Rakeysh, this is the future!”‘

I started out shooting commercials with Amitji at a time when no other actor was doing celebrity endorsements.

In fact, when discussing the BPL ad with him, I had actually told him, ‘Amitji, I’m really excited, but I don’t think you should do this ad.’

I pointed out that till then we had seen him 60 feet tall on a big screen, and now, I was being asked to make him six inches small on a TV screen.

It was unacceptable even to me, more so because till then, he had been the one in control.

Now, the remote would be in our hands and we would have the power to insult him by switching channels.

He laughed away my apprehensions, saying, ‘Rakeysh, this is the future!’ Once we had agreed to go ahead, I suddenly realised what a big deal it was!

Today, in an age of smart phones and social media, there is so much clutter that the excitement and sense of adventure is gone.

But back then, doing an ad with Amitabh Bachchan, when no one had seen him outside of a film, was something one couldn’t even have imagined.

He was God for me and everyone else, and God couldn’t go around selling a product.

I spent a lot of time on the script with copywriter Syed Usmaan and we finally hit on a way to facilitate his entry into this world.

The first ad started with Amitji saying, ‘Shayad aap mujhe TV par dekh ke hairaan hongey (You may perhaps be surprised to see me on TV).’

He then goes on to explain that he had done a fair amount of acting, thoda bahut theatre and had even sung a few songs.

‘So, I thought, yeh bhi kar lete hain (let me try this too),’ he reasons, explaining why he was endorsing BPL products.

This way, we pulled it off and the next four commercials that followed were ground-breaking. The experience of working with Amitji was amazing and life-changing.

I had once seen a sculpture of a mother and child with the caption, ‘A child gives birth to a mother.’

In my case, Amitabh Bachchan gave birth to a director.

I went on to make my first film with him, and I so enjoyed it that Aks was followed by Rang De Basanti, Dilli 6, Bhaag Milkha Bhaag…

There is a story about how Aks happened…

I was having coffee with Abhishek (Bachchan) when Amitji walked in and said, ‘Hello guys… And bye.’

He was taking a flight to Delhi and was on his way out.

I had the storyline of Aks in mind, had written 25 pages of the script, and handed them to him.

His flight landed around 11.30-11.45 pm and he immediately called me, asking, ‘Rakyesh, what are you drinking?’

‘Rum and coke, Amitji,’ I replied.

His next words took my breath away, ‘Let’s do this!’

And a director was born!

He has always given a voice to the younger generation.

That scene in Aks was completely extempore Aks is a paranormal thriller, revolving around a bad soul taking over a good man’s body.

My favourite scene is the one where Amitji‘s character, Inspector Manu Verma, commits marital rape, forcing himself on his wife Supriya.

The morning after, he has no memory of what happened as he had been possessed by the dead killer Raghavan’s soul at the time.

But from the scattered sindoor and broken glass, he gets flashes of the crime.

Shocked and horrified, he goes looking for his wife and finds Supriya cowering in a corner, clothes hanging around her.

I had not written any dialogue for this scene, I simply told Amitji and Nandita Das how I wanted them to play it, and left it to them.

And he finally bursts out, ‘Listen to me… Listen… I don’t know what is happening to me…’

There are several metaphors in that scene, but we will not go into that.

All I will say is that I was blown away by the way Amitji and Nandita executed that scene cinematically, completely extempore.

We flew down dancers from the London School of Ballet

While I was in London, working on the post-production of the BPL ads, Amitji had taken me to a recording studio where Bally Sagoo and he were creating Ab Baby, a first-of-its-kind pop album.

On our return, he played me some of the songs and on his request, I shortlisted three which I liked.

He surprised me by asking me to direct the music videos for Eir Bir Patte, Sone Machari and Kabhi Kabhie.

The trend of music videos was just starting, I had never directed any.

Now suddenly, I was being asked to direct three with the biggest star in the world!

And he wasn’t just lip-syncing but singing the first of the compositions himself.

We flew down dancers from the London School of Ballet.

Amitji‘s enjoyment was evident as he matched steps with the dancers.

When I wondered what made his body move like that, he said simply, ‘I feel the rhythm, and go with it.’

There was a lesson to be learnt there, I realised later.

When I ‘feel’ a scene, it goes off well.

I’ve been learning from Amitji all these years.

The Pepsi ad did not play for two years

After the BPL ads, the music videos and Aks, we were excited about the Pepsi commercial.

We got a script, shot it, and it was a lot of fun.

But the commercial didn’t play for two years till someone senior in Pepsi saw it and decided it was good.

Then it went on to become a legendary ad.

Amitji is not someone you just1 go to and shoot with.

He is an ocean into which you keep diving, discovering something new every time.

He can be addictive.

I have three scripts with him in mind, I hope I can do all three.

For me, he is not 80, but an energetic, enthusiastic and phenomenally talented eight yearold.