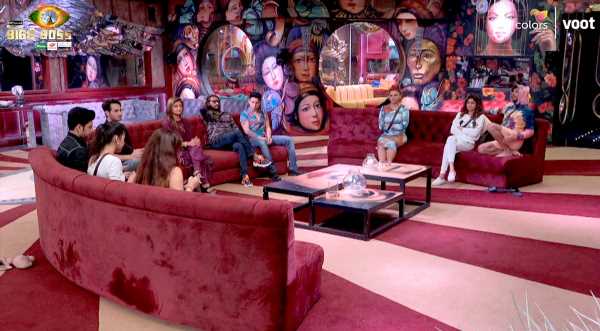 Weekend Ka Vaar turns out to be high on naach-gaana as a lot of celeb guests grace the show and celebrate New Year in style with Salman Khan.

The much pregnant Bharti Singh and her husband Haarsh Limbachiyaa are the first to take the centrestage.

Salman makes a grand entry while performing on some of his hit songs. Then he asks the contestants about their New Year resolutions.

But there’s a twist.

Each contestant has to say what resolution the others should follow in 2022.

Umar Riaz wants Tejasswi Prakash to think twice before taking decisions and Karan Kundrra wants Devoleena Bhattacharjee to keep her opinions to herself. Shilpa Shetty then joins the housemates through a video call, making her sister Shamita very emotional.

Next, Sheykhar Ravjiani arrives on stage and entertains the audience. He evens shakes a leg with Salman and gets the contestants grooving to his tunes.

Then, Salman invites Palak Tiwari on stage and praises the young actor. He reveals she was an assistant on Antim: The Final Truth. They dance on Palak’s hit song Bijlee Bijleem and everyone joins in. The New Year celebrations continue in the next episode as Salman welcomes Dharmendra on stage. The movie legend interacts with the housemates and praises Rakhi Sawant for entertaining the audience.

Bharti Singh joins the banter and asks Salman about the snake bite incident. She even flirts with Dharmendra and it’s hilarious.

Once the guests leave, Salman reprimands the contestants for cancelling the Ticket to Finale task.

Salman gets annoyed when Shamita makes the matter all about her. He yells at Shamita and asks her to think before going on a rant.

He also pulls up Karan and Tejasswifor being unfair in the task.

Later, Bharti and Haarsh enter the house for fun activity. They announce the eliminations will take place on Monday. The next morning, Rashami and Devoleena get into an argument over hygiene issues.

Tejasswi and Karan also have a spat over Umar Riaz and Karan ends up calling her a drama queen.

Rakhi and Devoleena chat with Tejasswi about her and Karan getting too close physically. Tejasswi gets offended and says Devoleena does the same with Pratik Sehajpal.

Pratik warns Abhijeet to improve his language as he says unpleasant things quite casually.

Karan asks Tejasswi about her ex-boyfriend, but she doesn’t want to talk about him, calling it a bad experience. However, the challengers aren’t real contestants, but are in the house just to add spice and competitiveness.

The challengers perform a fake task and Bigg Boss declares Vishal the winner. The same task is to be performed by Nishant Bhat and Karan.

They eat chillies, egg shells and Tabasco sauce. Nishant ends up vomiting when he eats a raw onion too. Ultimately, Rakhi announces Karan as the winner.