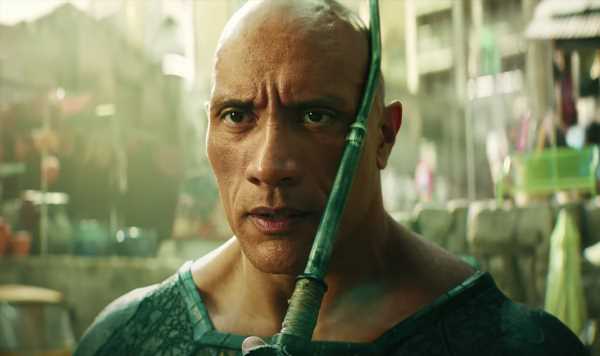 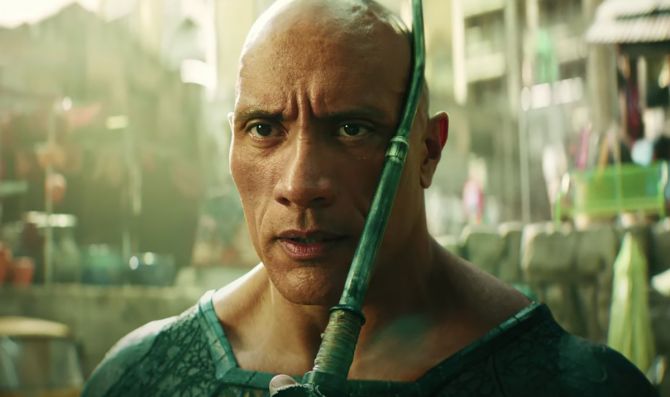 As Black Adam, he struts out and about in spandex too. Though it’s not a fabric the former WWE champion is unfamiliar with.

Back in the ‘attitude’ era, Johnson’s jerk ways as The Rock famously threw their weight around until he decided to make amends and earn his stripes as Hollywood’s Mr Nice Guy.

The tough imagery persists but the action hero’s comic (Jumanji) and singing chops (Moana) see to it that he’s a darling for what’s under all that brawn.

But in Jaume Collet-Serra’s big screen depiction of the DC comic book character, his Jungle Cruise star plays a savage metahuman in no mood to play nice.

Simultaneously, he must free his native Kahndaq, a fictional, war-torn Middle-Eastern country from the ruthless Intergang’s military occupation.

Truth is Black Adam started out as a supervillain and Shazam’s nemesis, who has acquired an antihero standing over a period of time. Oddly, the Shazam references are fleeting in presence like Djimon Hounsou’s blink and miss wizard.

Decidedly darker in intent and actions, Thet Adam aka Black Adam alternates between murderous menace and unlikely hero after an archaeologist single mum and her skateboard pro teen son implore him to come to their people’s rescue.

Having released him from a 5,000-year-old curse, Adam feels obliged to pitch in.

Amazing how these curious explorers have a knack for tripping on the precisely needed inscriptions at these age-old sites.

Black Adam is something of an ancient God teeming in super powers. Our man can fly and fry or split skulls in two.

Black Adam’s ultra-violent impulses make him a loose cannon in need of reining in.

Only he’s too much of a messiah for the long persecuted locals, questioning the leadership of patronising foreigners oblivious to their invaders until now.

Clueless, conceited super powers acting like self-appointed decision makers of a small Middle-eastern country devastated by war is a recognisable scenario that is regularly resonated in Black Adam’s politics.

In a shrewder movie, this would have a lot more impact than the monotonous spectacle it eventually settles for.

If only the story was more committed to its innate darkness.

In place of casualties, people (so far in hidden view) pop out of hiding to cheer for their champion.

Between Black Adam‘s tedious video game brand of action and a flimsy plot recycling Terminator’s killing machine from another timeline saving a mother-son on-the-run or harking back to Hollywood’s love for Egyptian style mythos and mumbo jumbo and a demonic crown that evokes Tolkien’s ring of power, there’s little we cannot imagine about its predictable premise.

Given the nature of the power Justice Society’s members possess, comparisons with the Marvel Cinematic Universe are inevitable.

It all comes down to Dwayne Johnson.

He’s a one-man show, a larger-than-life entertainer you just cannot look away from. 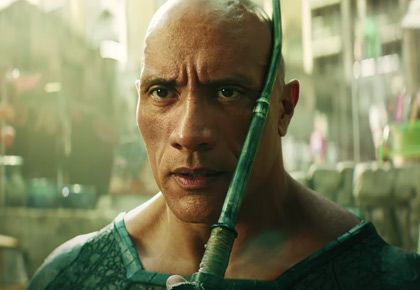