Rohit Shetty poaches on Vishal Bhardwaj territory to make his version of the Bard’s The Comedy of Errors.

There are several cinematic adaptations of Shakespeare’s play about two pairs of identical twins caught in a misunderstanding, of which Gulzar’s Angoor ranks foremost.

Cirkus is no Angoor. More like angoor khatte hain.

Over populated, over the top, extra bright, super loud beasts happy to laugh loudest at their own jokes, Shetty’s formulaic entertainers act and sound the same.

Cirkus is all that and, also, remarkably boring and puerile.

The Comedy of Errors is tailor-made for mix-ups and run-ins transpiring within a close-knit space, which was made all the more amusing by Gulzar’s rhythmic wit and eclectic cast led by Sanjeev Kumar and Deven Verma.

It’s obvious Shetty has watched Angoor, but I don’t know if he read Shakespeare before finalising the script unless erroneously spelling the title is his understanding of it.

Shetty’s sprawling style cannot grasp the revolving door pattern of its chaotic humour and focuses on outward distractions and laboured messaging instead.

Set in the 1960s, Cirkus ensures technology does not play spoilsport and gives the film-maker ample scope to fixate on retro overkill.

All the world’s a stage but in Shetty’s worldview, it looks something like a freshly-painted, flashy tin box.

Photosensitive viewers beware as the screen is sprayed in the gaudiest hues of candy and kitsch.

Vintage cars, trains and trams, brown brick hotels and staff in The Grand Budapest Hotel uniforms and promenades and paths strewn in flowers of every conceivable colour, the optical overload is to be seen to be believed.

Yet, for all its blinding razzle dazzle, the circus itself forms a nondescript portion of the story.

Devoid of stunts and spectacle, Shetty could have called it Post Office and it wouldn’t make an iota of difference. Nor does its time frame carry any context.

Tossing old classics from Bhoot Bangla, Johnny Mera Naam, Prince and Haath Ki Safai without turning them into a punchline is like gift wrapping an empty box.

Before going full throttle with its faux 1960s vibe, Cirkus time travels all the way back to mid-40s, when products of the Jamnadas orphanage — an establishment familiar to the founding members of the Golmaal franchise — Roy (Murali Sharma) and Joy (Uday Tikekar) — swap one of each twins as an experiment to prove parvarish is mightier than khoon.

Adoptive parents of the new-born boys name both the lookalike sets after Roy and Joy. Let’s just call them Roy 1 and Joy 1 of Ooty and Roy 2 and Joy 2 of Bangalore, played by Ranveer Singh and Varun Sharma respectively.

Roy 1 has a superpower.

He’s immune to electric current and makes a living by wielding high-voltage wires using his bare hands at the family circus.

The people of Ooty know him as Electric Man.

Roy 1 resists her suggestion to adopt because he believes khoon is mightier than parvarish.

He has a doting girlfriend (Jacqueline Fernandez) but her wealthy, stuck-up dummy daddy (Sanjay Mishra) who sounds like Dev Anand parodying Dev Anand is certain his future son-in-law is no good.

Trouble begins when he follows Roy 2 and Joy 2 to Ooty where a troika of thieves (led by Siddhartha Jadhav), their gangster idol (Johnny Lever), a gun-toting aunt (Sulbha Arya), a snake-tattooed cabbie (Vrajesh Hirjee), a Urdu poem babbling jewellery designer (Brijendra Kala) and a former dacoit-turned-hotel owner (Mukesh Tiwari) add to the ruckus.

If the monotony of Shetty regulars doing their vocabulary-challenged rave and rant routine in silly wigs and garish costumes isn’t exhausting enough, the lazy writing has exactly two running gags in its bag of broad comedy.

Sanjay Mishra, Siddhartha Jadhav and Johnny Lever are committed to giving their five-year-old fans a good time even in the absence of fresh humour.

But Murali Sharma is no Kader Khan and his attempts at breaking the fourth wall while proving humanity over heritage falls flat.

Cirkus forgets comedy is in errors, not ennui.

Joy 1 and 2 are written as siblings but treated as sidekicks to Roy 1 and 2.

Deven Varma in Angoor had bhaang. Varun in Cirkus doesn’t even get a biscuit.

All the vibrancy is reserved for the camera.

The leads are completely off colour.

Energy is Ranveer Singh’s middle name. But in Cirkus, he’s like a class clown on an off day.

He plays both the Roys like a single-expression robot with zero comic timing or emotional response to anything. Even the usually chirpy Varun Sharma looks like he got grounded for gate-crashing a stranger’s party.

There’s absolutely no chemistry between Ranveer and Varun. Or Ranveer and his love interests.

Speaking of love, Deepika Padukone in one item song shows more spunk than Pooja Hedge and Jacqueline Fernandez do in the entire duration of the movie. 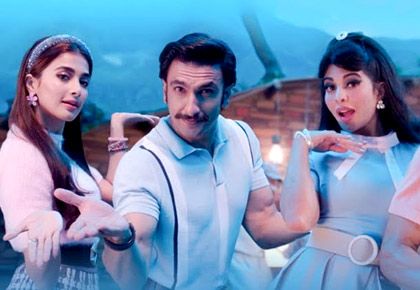