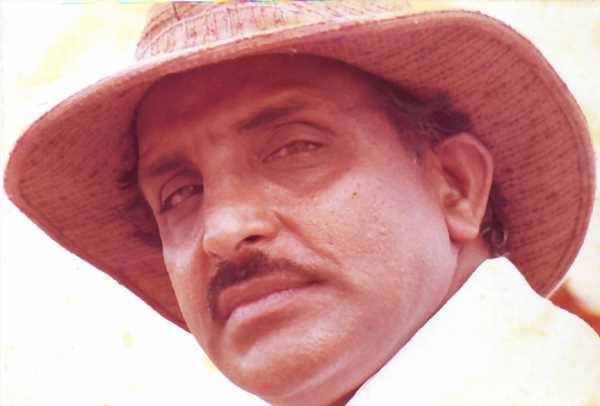 ‘In 1983, my father T Rama Rao made Andha Kanoon with Rajinikanth.’
‘Amitabh Bachchan was reluctant to come on board as a guest star, as Rajinikanth was a southern star.’
‘But when my father pitched it to him, he came on board.’
‘The movie ran for 200 days.’

Movie mogul Tatineni Rama Rao passed into the ages on April 20 in Chennai.

He worked with all the superstars of that time.

His son T Ajay Kumar tells Rediff.com‘s A Ganesh Nadar, “After he passed away, Rekhaji has called four times to inquire about my mother and our family. Jeetendraji called me. Dharmendraji was crying on the phone. Govindaji called me as they had made four movies together. Mithun Chakrabortyji called me.” My father studied up to Standard 12.

He was from a modest agricultural family.

He wanted to study engineering but my grandfather told him to go to Chennai and work.

As they knew film-maker T Prakash Rao, he went and worked with him.

When he came to Chennai, my grandfather gave my father Rs 100. But after that, my father never took money from his father again.

He worked as an assistant director with Prakash Rao for about five years.

He was working for Prasada Pictures, owned by Subba Rao.

His first break came when he was asked to direct (Akkineni) Nageswara Rao (the legendary Telugu matinee idol, known to this generation as Nagarjuna’s father and Naga Chaitanya’s grandfather) in Navaratri. It was a challenging assignment as Nageswara Rao played nine characters in the movie.

Those days, the technology was not there to show the same hero playing nine roles, but my father managed it.

After that, he made Brahmachari, and went on to direct Nageswara Rao in four movies.

He made seven movies with Sobhan Babu (the famed Telugu movie star). He got an opportunity to work with NTR (Nandamuri Taraka Rama Rao, the legendary Telugu actor who founded the Telugu Desam Party and was Andhra Pradesh chief minister in the 1980s; RR’s NTR Jr is his grandson) in Yamagola.

It ran for 300 days and was the biggest hit for NTR and my father at that time.

Yamagola was made in 28 days because NTR had only those many days to spare from his busy schedule.

The producer asked him to make Yamagola in Hindi, so they made Lok Parlok with Jeetendra and Kader Khan.

That’s how he made his transition to Hindi movies.

At that time, in 1979, he did not know how to read or speak Hindi. It took him eight months to learn the language.

Every evening, from 7 pm to 8 pm, he would take Hindi tuition at home.

As a young boy, I used to wonder why my dad was taking tuition.

Jeetendra was surprised when Dad recited the Hindi dialogues to him.

The movie was a hit. 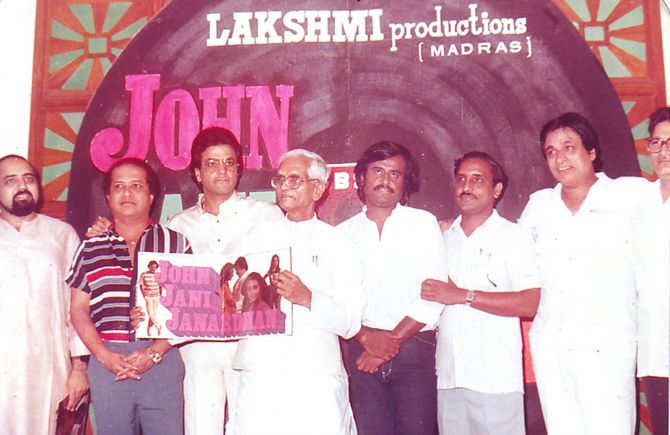 Aalu Magulu, starring Nageswara Rao, was a Telugu movie directed by my father. It was a hit.

Prasada Pictures asked him to make it in Hindi, and they released it as Judaai in 1980 with Jeetendra.

His third Hindi movie was Maang Bharo Sajna, a remake of Karthigai Deepam.

It was followed by Ek Hi Bhool, a remake of Mouna Geethangal, in 1981.

All four movies were hits.

In 1982, he made Jeevan Dhara with Rekha. It was a remake of the Tamil movie Aval Oru Thodar Kathai.

The same year, he made Yeh To Kamaal Ho Gaya with Kamal Haasan. But that did not do well. 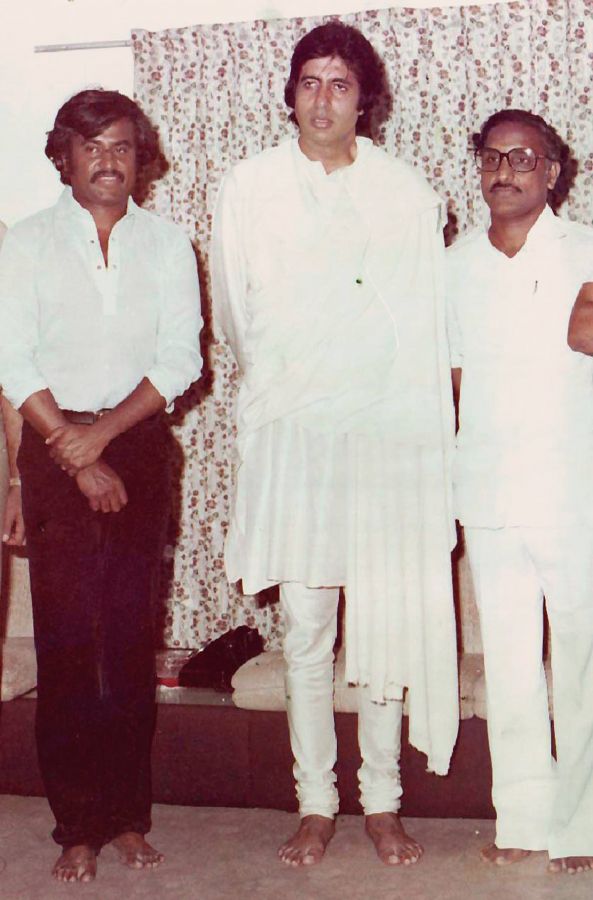 In 1983, he made Andha Kanoon with Rajinikanth.

Amitabh Bachchan was reluctant to come on board as a guest star, as Rajinikanth was a southern star.

But when my father pitched it to him, he came on board.

The 175-day celebrations were held in Chennai. Amitabh Bachchan attended along with then Tamil Nadu chief minister MGR (Marudhur Gopalan Ramachandran, the legendary Tamil actor, who founded the All India Anna Dravida Munnetra Kazagham and was Tamil Nadu’s chief minister from 1977 till his death in 1987).

My dad is known as the man who established Madras Movies or Hindi movies funded by southern capital. He was able to convince producers because of his work ethic. He always completed his movies on time.

I have seen him making his schedule even before he left for the shoots. He used to write it scene by scene:

Financiers knew he would complete the movie on time and when they would get their money back.

He has worked with all the superstars like Amitabh Bachchan, Rajinikanth, Kamal Haasan, NTR, Jeetendra, Dharmendra, Hema Malini, Rekha and Madhuri Dixit.

In fact, he was blessed to have worked with two generation of stars, from NTR and Balakrishna, Dharmendra and Sunny Deol, Sunil Dutt and Sanjay Dutt, Veeru Devgan and Ajay Devgan… 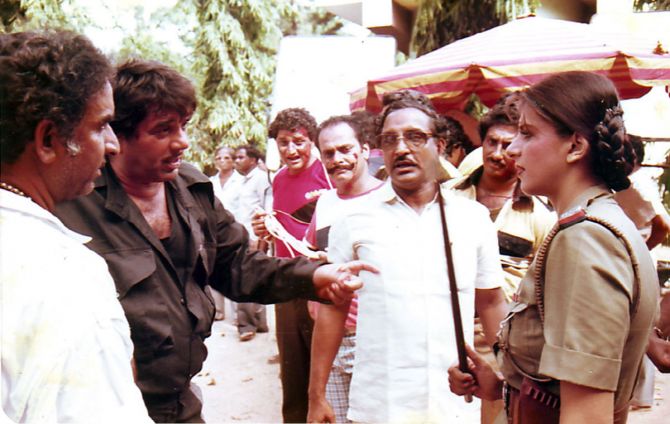 After he passed away, Rekhaji has called four times to inquire about my mother and our family. She worked in nine movies with him.

Rekhaji told me that even after the shoots, my dad would call her to check if she had eaten and also to tell her to sleep well, as they had to shoot the next day. She would speak to my dad in Telugu.

Jeetendraji called me after dad passed away.

Dharmendraji was crying on the phone.

Four years ago, my dad went to Mumbai with my children. They met Amitabh Bachchan, as they were in touch.

Govindaji called me as they had made four movies together. 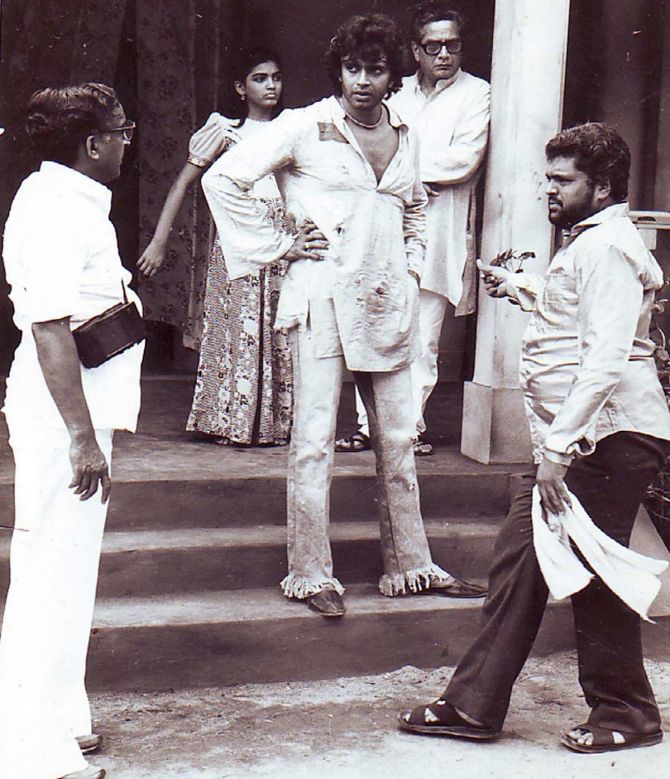 His last movie was Bulandi with Anil Kapoor, Rekha and Raveena Tandon. Rajinikanth appeared in a special role.

The Telugu film industry shifted to Hyderabad (from Chennai) in the 1990s when NTR was chief minister. My dad decided to stay back in Chennai, to make Hindi movies.

I joined my father’s Sri Lakshmi Productions in 2001.

We produced the Tamil film Dhill with Vikram. It was a hit and Vikram became a superstar.

The next movie we produced was Youth with Vijay. We are three kids.

I have two older sisters.

My father was never strict with us; he never raised his hand.

If he was upset with us, he would sit us down and talk to us.

During the summer holidays, we were allowed on the sets.

We have gone to Mumbai to watch his movies get made.

Those days, he was extremely busy, shooting back to back. Mummy would take care of us.

He would shoot in Mumbai, come back to shoot in Chennai with another team and then fly back to Mumbai.

Once a fortnight, he used to spend Sunday with us.

My happiest memories are when he used to take us to Marina Beach (in Chennai).

When he was shooting in Chennai, he would come to my room when I was going to sleep. I would smile at him, and he would pat me and then go to his room. He was very affectionate.

In school, I was very shy.

Other students used to congratulate me when my father’s movie was a hit.

We were grounded, and did not think of ourselves as big shots.

I used to give preview show tickets to my teachers when they asked.

Later, I assisted him in production, but never direction.

There is no way I can match his achievements. He has left behind a legacy. I have to ensure it reaches future generations. 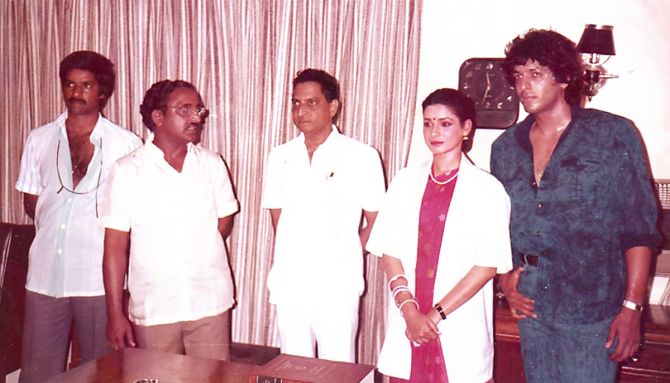 Movie-making has changed a lot since my dad’s time.

Now they are talking about Pan India movies, but he had made them long ago.

Those days, movies would run for 200 days. Now they run for 25 days and become a super hit because there are more screens.

The risk of making a Hindi movie is the same as when you are making a Telugu movie — if you go wrong with your planning, it will be a problem.

Hindi has a wider reach, but the effort of making a movie is the same in both languages.

More people recognised him after he made Hindi movies. 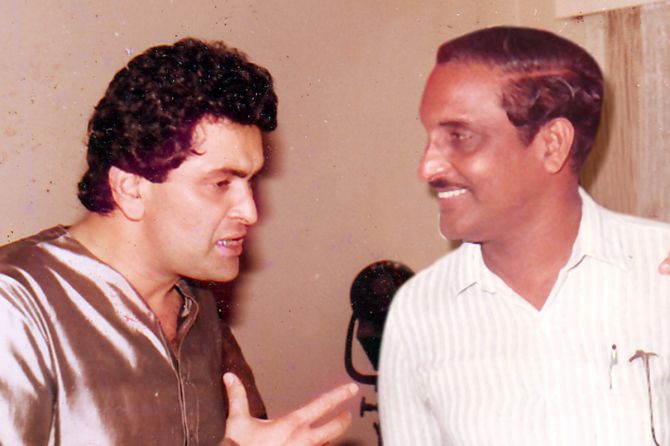 My father wanted to study engineering, but he could not. But he did start an engineering industry.

In 1990, he started the Madras Hydraulic Hose Private Ltd because of his interest in engineering. The company makes stainless steel flexible hose pipes. 350 people work in this organisation.

Anupam Kher, who worked with him, sent me a voice message which ended with, ‘You must celebrate his life instead of mourning his death.’ 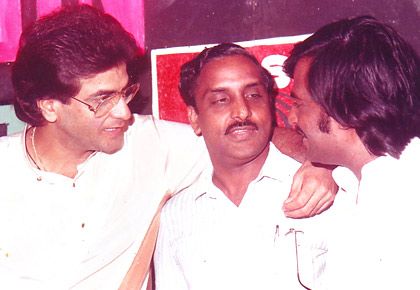