The Terminator franchise has had a rough ride ever since the release of James Cameron’s timeless classic sequel, T2: Judgement Day, but like those pesky machines, it still keeps on fighting even after being seemingly defeated.

With production underway, Paramount Pictures have released an official first look image at the film.

That is indeed an image, and you can’t say it’s not our first official look at T6.

As you can see, new cast members Natalia Reyes and Mackenzie Davis are standing next to an armed and dangerous-looking Hamilton. There’s some smoke in the background. Reyes’ character seems to work for Arius Industries while Davis’ character has a metal pole and some white lines over her body.

And that’s about it. No Arnie, no iconic machine skulls, no Christian Bale shouting at a member of the crew in the background. Just the three ladies looking at the camera. 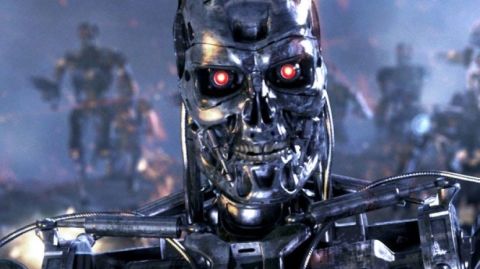 Deadpool director Tim Miller is getting behind the chair for this one, while James Cameron is producing. In fact, he’s signed on to produce three of these things.

Do you remember when Cameron said he thinks everyone has moved on from Alien? Yeah, it’s not the only franchise.