‘These accusations of my film being a copy only makes our chances at the Academy harder.’

Even as a raging debate eddies around him about whether his film, Chhello Show (Last Film Show), is a worthy contender for the Oscars, Director Pan Nalin keeps his cool and explains to Rediff.com Senior Contributor Roshmila Bhattacharya why all the charges being levied against him are irrational.

“One only needs to Google to learn that 17 jury members, who have collectively won 30 National Awards between them, unanimously voted for Chhello Show. The process was transparent. If only people had done some research, they would have known no rules were bent,” he says.

It is obvious that Chhello Show is semi-autobiographical. What was it like revisiting your childhood on screen?

It was more like rebuilding the innocence and simplicity of my childhood on screen.

I used to visit my family in my village in Amreli, Gujarat, but never stayed for more than a few days.

This time, I was there for a long period because of the film and got time to revisit all the places where I had grown up.

I was happy to discover that the 60-70 stretch where the meter-gauge train still runs is unchanged with only diesel engines having replaced the steam engines.

The cinema hall of my childhood had closed down some 20-25 years ago and they were storing sugarcane there.

When we removed the sugarcane, we found that the benches were still intact and refurbished them.

I met old friends who still lived there, some of whom I had not seen in years.

We spoke about family, friends, food and films.

What are some of them doing?

One is a farmer, another whose father was a signal man, has a full-time job as an engine driver. He even got his brother into the same profession.

Since the last one year, they have been trying to bring broad-gauge trains to our station and one of my friends is trying to set up a tea stall there. You must be famous in your village?

(Laughs) Well, I’m a little bit of a local legend there.

The local newspapers have carried articles and my friends know that I make movies which go to Canada, America…

But they couldn’t believe I would turn our story into a film.

Those who have seen it were super emotional. One guy was upset that I had forgotten Ibrahim Bhai, who had a paan stall next to my father’s tea tapri.

(Laughs) I had to remind him this was a movie and I could not include everyone.

‘But he was your father’s best friend,’ I was told!

What was your school teacher’s reaction when he saw you had included him?

(Sighs) Dave sir died at a young age in a car accident between Amreli and Rajkot.

His family was very moved that I had paid tribute to him.

He used to say, ‘There are only two castes, one who can speak English, the other who don’t.’

It was something of a local joke and underlined that to make something of your life, you had to learn English.

‘Pado aur bhago, learn and run’, that was the constant buzz in our village.

Dave sir would reiterate, ‘Get the hell out of here, there’s no future here.’

He told my father he would send my paintings to competitions. If I won, I could use the money to go to Baroda and study Fine Arts.

He was a Fine Arts graduate himself and understood that while it was too early for me to make films, Fine Arts could push me in the right direction.

You had another teacher too.

Yes, Mohammad Bhai, the projectionist, with whom I would swap lunch to see movies.

He was a know-it-all who would quip with sardonic humour as he watched me, ‘Yeh maya jaal hai, issme mat phasna (This is a web of illusions, don’t get caught in it).’

He still lives in the village?

He passed away during the pandemic.

In 2011, when I had visited, my father had urged me to meet my friend who was in bad shape.

I had not met Mohammad Bhai in 10 years and was shocked to see him wheeling a push cart and selling vegetables.

He was a third-generation projectionist, his life had been the projection room since he was 14.

But when films were digitised, his friends and he lost their jobs.

He spoke about how projectors were destroyed, how their world changed.

His words stayed with me because that projection room had been a huge part of my childhood and it set me thinking.

I remembered family and friends telling me they weren’t surprised I was making movies because even as a child, I would collect matchboxes and spin stories around the pictures on their cover, put up performances from the Ramayana and Mahabharata, steal reels and try to make my own films.

From what my friends and I had gone through Chhello Show was born.

What was the first film you saw?

Jai Mahakali, in a dusty theatre, full of ants and pigeons flying in occasionally.

Whenever the camera zoomed in on Mahakali, her tongue hanging out and a garland of skulls hanging around her next, I would run back to my seat.

I was around eight or nine at the time, but I was still spooked.

By the end of the film, my neck hurt because while watching the screen, I would frequently turn back to look at the beam of light coming from the projector room.

I was hypnotiSed by it, and wondered what was happening in the booth.

On the train ride home, I told my father, ‘I want to become a film.’

(Laughs) Not make a film, but become a film, like you become an engineer or a doctor.

Chhello Show is about the passion for cinema and the dreams it fuels. Yet, it is still not considered a worthy contender for the Oscars, with comparisons being drawn with the 1988 Oscar-winning Cinema Paradiso. and the 2008 Marathi film, Harishchandrachi Factory.

It is sad, but I can’t really blame people.

Passions run high because we love our stars.

Also, they have not seen my film yet, maybe they will change their mind when they do.

But these accusations of my film being a copy only makes our chances at the Academy harder.

Before it was even announced as India’s official entry in the Best Foreign Language category, many Academy members had seen it, and a couple had tweeted that it was India’s biggest contender for the Oscars.

It was picked up by a big Japanese studio, Shochiku.

For the first time Samuel Goldywn Films, an American studio, bought an Indian movie, and at the Venice Film Festival announced that they believed audiences in America would love it and would be happy if India sent it to the Oscars.

I told the studio president, Peter Goldwyn, that we had submitted it to the Film Federation of India, and they would decide.

We live in an information age and one only needs to Google to learn that 17 jury members, who have collectively won 30 National Awards between them, had unanimously voted for Chhello Show.

The process was transparent. If only people had done some research, they would have known no rules were bent and would then not have got so blatantly violent.

But detractors insist that the film shouldn’t have qualified because it was submitted last year.

But the Academy has allowed films that could not be released last year because of the pandemic to be re-submitted.

We had only three weeks last December to make it to the theatres. It was too short a time to orchestrate a release.

Chhello Show was the first Gujarati film to be premiered in the Spotlight section at the Tribeca Film Festival and was the first runners-up for the Audience Choice Award.

It won and Audience Favourite Award at the Mill Valley Film Festival.

A certain section insists it is not even an Indian film/

You only have to go through the IMDB list of credits to know that several states of India are represented in the cast and crew.

There are six kids from Kathiawad, along with many actors and line-producers from Gujarat.

My first AD, Subhadra Mahajan, is from Himachal while one of my sound recordists, Harikumar Madhavan Nair, is a National Award winner from Kerala.

My associate cinematographer is Linesh Desai. That’s not a German name, is it?

My company, Monsoon Film Pvt Ltd, was set up in Delhi and moved to Mumbai.

Only our sales agent, hired on a commission basis, is a foreign studio that has sent films like The Artist and Father to the Oscars.

I can understand that some people are disappointed, but to accuse Chhello Show of not being an Indian film is unfair!

How much more Indian can my film get?

Don’t Miss Part 2 of this interview! 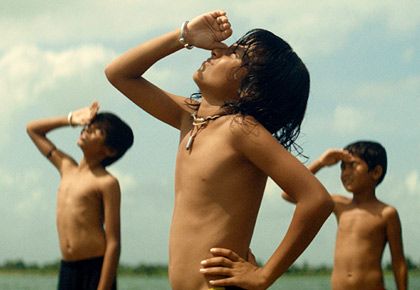