‘When I got married and moved to the US, I found it liberating in a way that I understood myself, who I am as a person and how I process things.’

Madhuri Dixit returns to regale audiences with her new film, Maja Maa, which sees her as an everyday woman.

It’s a film she’s enjoyed working in for various reasons.

But as she tells Subhash K Jha, “This film gave me the chance to do my first ever garba performance!”

Did you enjoy shooting for Maja Ma?

Oh yes, absolutely! It was truly maja on the sets of Maja Maa, a whole lot of different and surreal experiences because this movie came with many firsts for me.

Also, this film gave me the chance to do my first ever garba performance!

Apart from that, the script was something that drew me to it.

I found my character, Pallavi Patel, to be so interesting and challenging.

So yeah, when there are a lot of things that you admire in a project, you tend to enjoy every bit of it.

Earlier this year, you made your OTT debut with The Fame Game. Do you see OTT platforms as the way forward?

Oh yes! There are so many kinds of roles being written for streaming services and that really provides us actors, with the opportunity to explore our craft and challenge ourselves.

Stories on OTT platforms are unique and a lot of them have women as the focal point, which is great.

OTT platforms are a medium of connection between so many countries, and they have made women the highlight of a lot of the content that goes out to the world.

I think OTT is definitely going to lead the way for entertainment in the future, where artists, especially female actors, can play complex and layered roles. As a wife and mother, how closely did you identify with your character in Maja Ma?

They take care of their husbands, try to be friends with their kids so that they confide in them and do it all expecting nothing but love and respect.

So yes, these are the traits of a regular mother and, unsurprisingly, Pallavi has the same feelings.

But apart from being a wife, a mother, and a daughter, she is a woman of her own. We have tried to showcase that as well.

Have you ever felt that your career was diminished because you chose to take a break at the peak of your career?

No. I always wanted to lead a simple life and spend time with my family.

Earlier, we used to do multiple projects together. Sometimes six-seven films at the same time and as a result, I did not have time for myself.

It was all work and then home.

But when I got married and moved to the US, I found it liberating in a way that I understood myself, who I am as a person and how I process things.

Also, whenever I used to travel abroad for work, it was always for my job and when I would wrap the schedule, I would return home.

But after getting married, I finally got the chance to visit those places as a tourist.

The time I spent in the USA was a blessing as I got to spend time with my husband and kids. It was a win-win situation for me. What was it like shooting with the director and cast of Maja Ma?

I’ve learned so much from everyone while working on the film.

The most mischievous of the lot was our director, Anand Tiwari. He is a ball of energy.

I remember he was the one dancing the most while shooting for the song Boom Padi.

Gajraj Raoji has the perfect comic timing. His one-liners in the film, while the shot is going, were impossible not to laugh at. And I didn’t want to ruin his shot.

I had to try really hard to avoid laughing, so I used to sing sad songs in my mind.

I loved working with the younger lot, Ritwik Bhowmik, Srishti Shrivastava and Barkha Singh. They are so talented and hard working.

when I was their age, I knew so little about films. I learnt along the way, on the job. but they already know so much.

They understand cinema, they understand the work. They are full of joy and full of life and whenever they used to come on set, the set got a life of its own. That also inspired me a lot.

You could have long conversations with them, and learn so much. Are you doing another season of The Fame Game?

Currently, I am busy with the promotions of Maja Maa and shooting for the new season of Jhalak Dikhhla Jaa.

I am excited about audience’s reactions to Maja Maa when it premieres on October 6.

At this point, I only hope that they love me in this new avatar.

Are your sons inclined towards a career in acting?

Right now, they are focusing on their studies.

I honestly don’t know whether they want to make a career in acting.

I would be okay with whatever profession they choose.

I feel kids should follow their passion. Once you are passionate about something, you will enjoy your work. 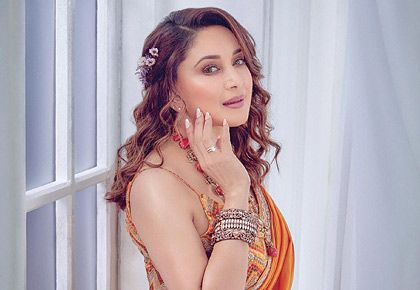