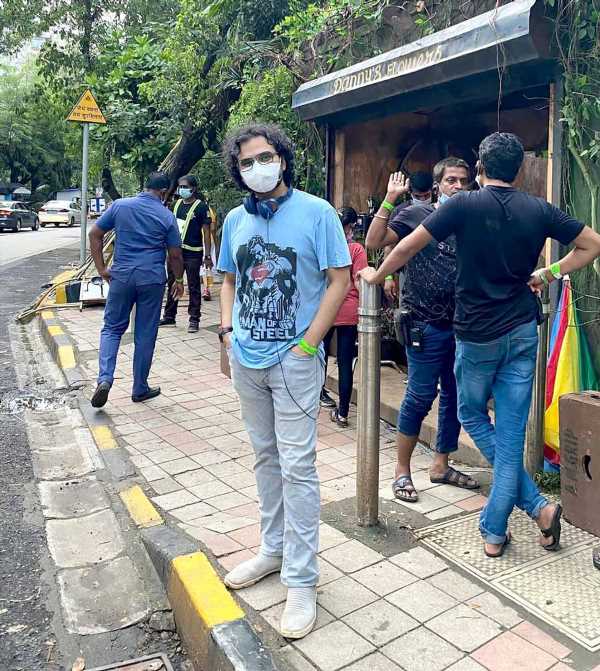 ‘The common ground between a film-maker and a film critic is a mad masochistic love for the movie.’

Just what is the role of a film critic?

Raja Sen, Rediff.com‘s former film critic, who has co-written the script for R Balki’s recent film Chup: Revenge of the Artist, fields questions from Sreehari Nair and explains, “You, as a critic, have to kind of try and open up a worldview, just to make people try things they wouldn’t normally or maybe see things within something they’ve already seen, or point out something that’s not so obvious.”

How do you respond to the charge that if you knew so much about films, why don’t you direct one yourself?

It’s like asking Harsha Bhogle to bat. You don’t need to.

The act of doing does not automatically make you better at something.

The common ground between a film-maker and a film critic is a mad masochistic love for the movie.

I think if you have that, and if you are open to learning more about movies every day, and you’re consuming cinema and things written about cinema, that’s what you need.

Going back to the cricket analogy, it’s like, when we look at certain batsmen, and they are very technical, they know what they’re doing. And then you have someone like Virendra Sehwag who comes there, and whacks it while singing a song, it doesn’t mean that he knows more about technique. Harsha Bhogle might know more about technique than he does.

Roger Federer will not be able to write about his own game as well as the great sports writers of the era.

Suppose I make one good film, does that mean all my reviews will suddenly be considered valid?

And it’s alright to have this viewpoint — that they should make something first — but I don’t buy it.

Can film criticism be a legitimate form of art, like short story writing?

I would like to believe that I have had very kind remarks from some people about things that no one has watched.

Friends and readers abroad have written about things that they will never watch because it is in a different language but they’re amused by the way it’s written.

I think it’s important that your film review is distinct.

I read other critics’ reviews after I have seen a film to know what conversation is going on about it.

And if I am reviewing the film, I read other reviews after I have written mine.

I don’t know if it can be like short story writing because it’s non-fiction, but I think it can definitely be a good essay.

Like Salman Rushdie wrote about Terry Gilliam’s film Brazil. That’s one of the best pieces of film criticism.

The man is not a reviewer; he is the greatest novelist of our time.

He’s looking at a surrealist film, finding something beautiful in it, and writing about it at length.

I think that’s what the aspiration is, that you create something that transcends the market role of whether this is worth spending money on. That it will also, within itself, provide a little bit of entertainment, even if the reader does not want anything to do with the movie itself. Should upgrading the audience’s collective taste rank among a film critic’s top objectives? Or is that just something you hope would happen along the way?

I think it’s a little presumptuous to think that you know more than the audience.

Yes, there are times when you realise that a lot of really ghastly films are becoming huge hits and so you wish that they are perhaps being caught in some trap of juveniles’ flashiness, that larger-than-life cinema that is just kind of regressive on certain levels.

Upgrading the taste of the audience is one part of it. I don’t think it’s upgrading as much as expanding their view, making them open to new things.

Like, for example, if you made a film of a certain crazy genre, if you have made a musical like Jagga Jasoos, which is such so experimental.

People were closed off to it because the dialogue was sung.

But if you do more of that, if you champion that effort, that it’s not a perfect film, but it is impressive and ambitious, you, as a critic, have to kind of try and open up a worldview, just to make people try things they wouldn’t normally or maybe see things within something they’ve already seen, or point out something that’s not so obvious, so that they can suddenly go, ‘oh, okay, this is another layer I wasn’t even looking at.’

So try to open up a little bit of a conversation with the reader and try to get them to look at things in a slightly different light.

If I’ve written fair and decent action, and they also felt the same, they’re not getting anything from the review.

I would hope that some observations come in, where I can describe a scene and that description should give readers a little something that ‘Yes, I didn’t notice this’ or at least, this is somebody’s vantage point, you don’t have to agree with this, but then at least know about it.

It’s not as much as upgrading as hoping to expand their worldview, which is a mission.

It’s not as altruistic as you think because it also like expanding your worldview constantly. We all know that Rajkumar Hirani’s films haven’t aged well. Which other film-makers you loved in the 2000s have suffered a similar fate?

I think it’s a little reductive.

There are a lot of films that you look back on now and are not as impressed by as you were the first time you saw them. Some things get dated.

Having said that, I think through my period as a critic, I stand behind my reviews.

I don’t think I would make such a sweeping statement that Mr Hirani’s film haven’t aged well because I still consider Lage Raho Munna Bhai a gold standard in terms of how a script should be written. It balances humour, pathos, romance, Mahatma Gandhi and irreverence all in the same package.

It’s a crazy, ambitious thing that they somehow pulled off.

Sometimes it’s not up to the film if it ages well or not.

Sometimes it’s us, the viewer, and kind of discussions on social media, increased awareness on things like misogyny and regressiveness, and that’s great because you are looking at certain things.

Now when a stalking scene in a film happens, it is immediately called out by everybody, right?

Earlier, we would see it and we will think like, but that’s what happens in the movies.’Yeh toh movie ki chhed chhad hai.’

There is a growth in the viewer.

But sometimes we end up looking at something from the ’70s in today’s lens, and I find that problematic because it was made when it was made, and we are suddenly holding it up to a new light.

So when you see political incorrectness, for example, in an older film, we are aware, of course, that it is politically incorrect. But you also have to understand the context of it. We can’t hold up something from the mid-’90s, or the early 2000s and look at it today and say, ‘Oh, that doesn’t hold.’

But we should examine why it doesn’t hold up, whether that’s the film’s fault or if it is the fault of our perception.