Producer Karan Johar celebrates the big event by sharing pictures from the sets and writing, ‘An entire lifetime of memories, in a heartbeat!

‘This film gave so much more than just that – it gave me joy, unbreakable bonds, a different lens for story telling and of course – the last film set I could be on with my father. And for that, I will forever be grateful to this film! #19YearsOfKalHoNaaHo’

The film’s leading lady Preity Zinta shares a video from the film and writes, ‘Remembering Kal Ho Naa Ho on its anniversary this Thanksgiving weekend.’

‘This is one of my favourite scenes from the film cuz multiple pages of dialogues were shot in One big take. Later a few close ups were added. This scene is all about gratitude & appreciating what we have in our present.

Director Nikkhil Advani tweets: ‘In March of 2002, Karan called me to his cabin at the old Dharma Prod office (it was actually the new office for us since we had moved from under the Mahalaxmi bridge) and told me to stop behaving like some hip, action auteur.

‘He narrated the idea of” ‘Kai Ho Naa Ho’ to me and the rest is history.

‘Nothing would have been possible if it was not the script that Karan wrote and the vision that his father Yash Uncle brought alive for a first time director. Since then I have only constantly tried to keep doing to others what they did for me.

‘I am lucky that in Monisha and Madhu I found partners who believed what I had been taught at Dharma and Yash Raj. That it’s always a family first.

‘Thank you to the whole cast and crew who like me are told by countless people wherever they go that ‘Kai Ho Naa Ho’ changed their lives. It most definitely changed mine.’ Sanjay Kapoor, who starred in the film, feels grateful too: ‘So glad I was part of kal Ho Naa Ho @karanjohar’ Delnaaz Irani thanks Karan: ‘Thankyou @karanjohar for giving me SWEETU I’m ever so grateful thankyou to the entire team.’

Siddharth P Malhotra, who has films like We Are Family and Hichki to his credit, adds, ‘Fondest memories of mine too as an assistant!’ Ehsaan Noorani of Shankar-Eshaan-Loy, who composed the music for the film, writes, ‘A coffee mug presented to us by Yash Johar Sir as part of a commemorative hamper when the music of Nikhil Advani’s directorial debut film Kal Ho Na Ho released 🙂 He passed on shortly after that … 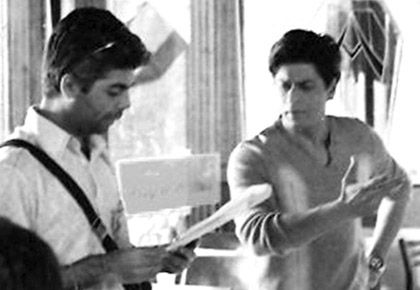