‘First, I get to play a princess, second, it is a Mani Ratnam film and third, it is a period film.’

Trisha Krishnan has been a part of several successful films across languages, but she has always wanted to do a period drama where she could play a princess.

Mani Ratnam’s Ponniyin Selvan 1 ticks off that box on her wish list.

Trisha tells Rediff.com Contributor Mohnish Singh, “I could totally relate to Kundavai because she is very, very, empowered.”

How do you see Ponniyin Selvan 1 in your filmography?

I mean, I have done a lot of films and been around for a while.

It is a very common question and everyone has asked me, ‘What character do you wish to play since you have pretty much done so many already?’

I have always said, ‘I want to be a part of a period film.’

Obviously, I wanted to play a princess, right?

So, PS-1 is my triple bonus film because firstly I get to play a princess, secondly, it is a Mani Ratnam film and third, it is a period film. You play Princess Kundavai in the film. How difficult was it for you to play a woman of a different era?

A lot of people told me that playing Kundavai would have been so different for you because she’s of that era.

You play characters who are pretty strong and very today.

But besides the physicality of the character, I could totally relate to Kundavai because she is very, very, empowered.

To be honest, we come from a blessed generation where I feel very empowered today.

In that era, it was very, very difficult to be a woman and even voicing something in a kingdom where the men would be like, ‘Who is she to just walk into a kingdom and say this,’ you know.

So that was one part of Kundavai that I could really relate to it.

That’s what I loved about Kundavai because I was playing a today’s woman, dressed differently and set in that era. 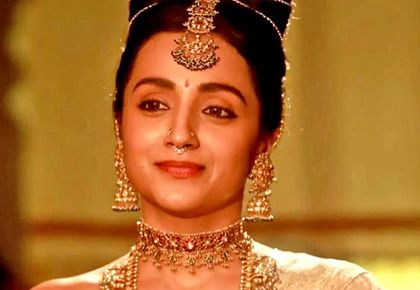