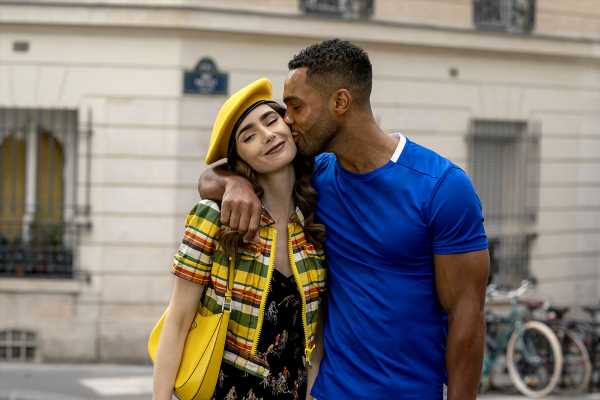 It takes a different kind of genius to make a show so full of chirpy good cheer that it’s hard to dislike, observes Deepa Gahlot.

The creator of Emily In Paris is Darren Star, the man who thought up Sex And The City (also the less popular Beverly Hills, 90210, Melrose Place andv Younger), so it should be obvious that couture is foremost, no matter what professional or personal crises the protagonist is going through.

That and the sheer gorgeousness of Paris on screen — viewers probably sigh more than laugh — because by sitcom standards, the show is simply underwhelming.

When the first season dropped, Emily Cooper (Lily Collins) was sent to Paris on behalf of the marketing agency, Savoir, when her boss Madeline (Kate Walsh) got pregnant.

Without being able to speak French — and being called ‘hick’ by her Parisian colleagues — Emily manages to get by, blundering around like ignorant Americans do wherever they go, smug in their own superiority.

Of course, the French do not warm up to her right away, her boss Sylvie (Philippine Leroy-Beaulieu) is particularly mean. Emily does not look business-like, but she is supposed to be a marketing genius and social media whiz, with amazing powers of persuasion. The show neither judges her loud fashion sense nor her cutesy manner as she turns into an irresistible hunk magnet.

Since it is Paris, the main hunk is a chef, Gabriel (Lucas Bravo), who lives in the same apartment building.

Emily is unembarrassed about lack of sophistication, and when called ‘basic bitch’ by a snooty designer for hanging an Eiffel Tower keychain on her bag, she turns the tackiness to her advantage with an impromptu speech that impresses the man.

The series was greeted with mild outrage by the French, who felt they were portrayed with every cliché imaginable.

Still, even if the show was hate-binged, it got enough eyeballs to merit a second season, in which Emily just about manages French — in spite of taking classes — but fits in better.

‘You are so positive,’ her friend and roommate Mindy Chen (Ashley Park) exclaims with part admiration, part exasperation, because Emily is just never fazed by anything. Which is possibly because she hardly ever encounters a real calamity.

Season 2 ended with a cliffhanger, where Emily had to make up her mind between two jobs — with Madeline and Sylvie at war over her — and possibly, two men.

Gabriel has committed to Camille (Camille Razat) but there are soulful looks exchanged between Emily and him; then there’s the Englishman Alfie (Lucien Laviscourt), who hates Paris, and calls her Cooper, like she were his school buddy!

As Season 3 begins, Emily is so distressed that she has nightmares of falling off the Eiffel Tower, so she cuts her hair in bangs!

This time, too, there is just as much style and kitsch (jewel coloured knee boots!) but also a little more drama.

Other characters, like Mindy and Emily’s Savoir team of Luc (Bruno Gouery) and Julien (Samuel Arnold) get a little more sunshine that follows Emily everywhere.

That’s just about it.

Otherwise, the show is cheesy and shallow as ever. But, as the Americans say, why fix what ain’t broke?

If gazing at beautiful people suffer two-minute heartaches while dressed in outfits that look as good as they must feel uncomfortable (and where do they stuff so much couture in small apartments), why mess around with such frothy ‘existential angst’?

The viewer gets to see breathtaking scenery — that episode in Provence has drool-worthy visuals — and beautiful French chateaux, cafés, bistros, fashion houses and even a sequence set during the iconic Fete de la Musique.

If all that romantic chaos wasn’t enough over three seasons, Season 4 is already in the works because the latest season also ends with a cliffhanger.

It would take a lot of work to make 10 more episodes that cannot possibly add to Emily’s confusion routine, maybe another baby, since Madeline has hers (and regains her shape in no time) and another character is pregnant.

Still, it takes a different kind of genius to make a show so full of chirpy good cheer that it’s hard to dislike. Maybe if it did get serious — either about love or marketing — it would fall apart!

Emily In Paris 3 streams on Netflix.