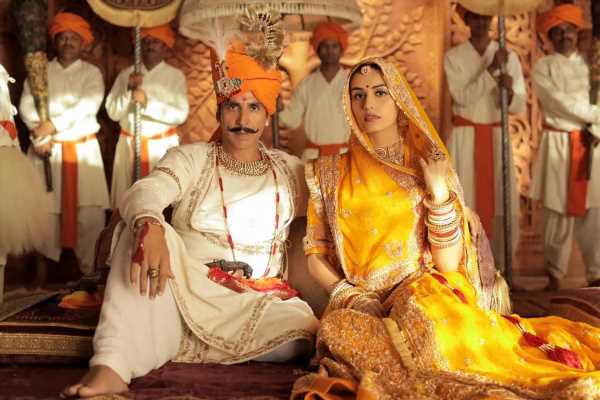 Akshay Kumar plays the part with enthusiasm, like he was just waiting to get into the costume of a historical hero, observes Deepa Gahlot.

When ads of a film proclaim that it is about the last Hindu emperor, and its hero states that very little is known about Prithviraj Chauhan, as if the film were meant to right that historical injustice, it is impossible to watch it without being aware of the subtext. More so, considering the times we are living in.

It is not true that Prithviraj Chauhan is unknown.

But what cannot be denied is that what is taught in school as history is not necessarily accurate, and what children read in Amar Chitra Katha comics is not actual history.

However, if one goes looking, there is a surfeit of published material about the emperor. More than scholarly research, there is an oral tradition in the folklore of any region. So as the story is recited, sung, heard, and passed on, it is also mutated or distorted, and eventually takes on the quality of myth.

The itinerant balladeers sang of the exploits of brave kings because for their audiences, it was entertainment.

Dr Chandraprakash Dwivedi, the writer and director of Samrat Prithviraj treats the film with the style of the grand Bollywood historical (appropriated by the cinema of Sanjay Leela Bhansali), and the reverence of a folk bard, basing his script on the epic Prithviraj Raso, which may or may not have been written by Chand Bardai, a close associate of the emperor, court poet and oracle.

So all the familiar plot points are there — the love story with Samyukta, her elopement with him, and the treachery by her father Jaichand that led to the capture and blinding of Prithviraj.

The King of Ajmer, Prithviraj Chauhan (Akshay Kumar) is portrayed as a brave and benevolent ruler, upholder of Dharma (used in the context of righteousness, not religion), so that when the brother of his enemy Mohammad Ghori, Sultan of Ghazni (Manav Vij) seeks asylum along with a courtesan, the King grants it, saying that even a vaishya (prostitute) deserves respect.

This leads to a battle with Ghori, in which the sultan is defeated, imprisoned and then let off on a whim that baffles everyone.

Prithviraj and Samyukta (Manushi Chhillar) have a long-distance romance going — she has heard tales of his valour, and he of her beauty, though they have never met.

A succession tussle erupts over the throne of Delhi between Prithviraj and his cousin, Jaichand (Ashutosh Rana), the king of Kannauj, who is also Samyukta’s father.

Jaichand openly declares his hostility, and to insult Prithviraj installs a statue of him as his palace guard.

As a political move, he organises a swayamvar for his daughter, and she defiantly garlands the statue.

Right on cue, Prithviraj arrives to claim his bride.

The rage and humiliation leads Jaichand to ally with Ghori to defeat Prithviraj.

What came as a complete surprise are lines about women’s rights, and an anachronistically feminist Sanyukta, who argues with her father and mother (Sakshi Tanwar).

She demands and gets to rule alongside the emperor, who encourages her to accompany him in the darbar.

The jauhar sequence, unfortunately could not be avoided, but Dwivedi gives it an unexpected visual twist.

It is almost mandatory for the dialogue of historical films to be bombastic, but Dwivedi has written the lines with an acceptable amount of declamation, though it was odd to hear Urdu words creep into otherwise chaste Hindi.

He even adds a dash of comic relief in the banter between Chand and an elderly Kaka Kanha (Sanjay Dutt).

Akshay Kumar plays the part with enthusiasm, like he was just waiting to get into the costume of a historical hero.

Sonu Sood and Ashutosh Rana are impressive in their roles.

Newcomer Manushi Chhillar is blandly pretty and a bit too raw to have carried off a fiery princess.

Six composers could not come up with a single memorable tune. If the Harahar chant sticks, it is because of overuse.

At 135 minutes, the running time is just enough not to bloat the narrative or to let boredom set in.

However, like the listeners of the balladeers of yore, watch it as entertainment or a heavily fictionalised version of history. 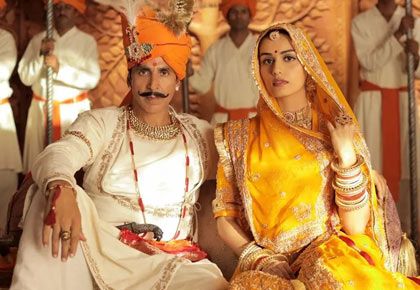