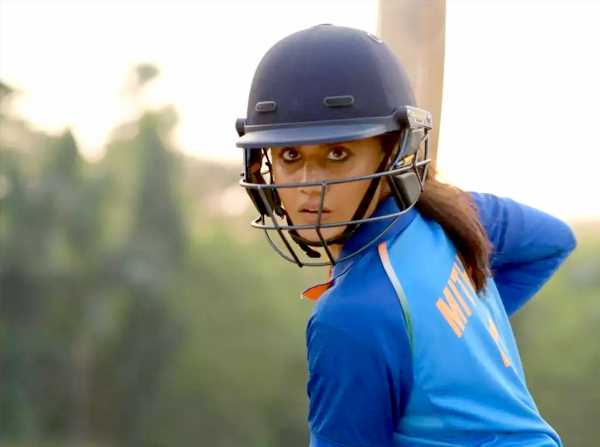 Srijit Mukherji’s latest film, Shabaash Mithu, has taken that expression and run with it.

At the heart of it, the movie remains about Mithali Raj, her journey, and how it coincided with the period of change in Indian women’s cricket.

It works as a tribute piece to the legendary player who ended her career in June as the most prolific batter in women’s cricket and led India to two World Cup finals.

The movie opens with a disclaimer that it is a fictionalised piece inspired by Mithali’s journey, and the liberties it has taken with the story begin at the very beginning.

Raj’s initiation into cricket was very different than the one depicted in the film: Of being introduced to the game by a cricket-mad female friend, who takes on traditions and boys with equal gumption.

While the young Mithali (Inayat Verma) is a star Bharata Natyam dancer, which the real Mithali was, her friend Noori (Kasturi Jagnam) opens her eyes to a whole new world, where girls can also play cricket — albeit on a secret ground hidden from the boys — and dream big dreams.

Friendship is at the heart of this narrative and the characters are expertly played, but far removed from reality.

That seems to be a recurring problem with the movie.

The journey of a middle-class girl from a military background (her father Dorai Raj worked in the Indian Air Force, and had pushed his kids into sports because he didn’t want Mithali to sleep till late) reaching the pinnacle of success and changing the country’s cricket landscape is not deemed dramatic enough.

It is like her first coach Sampath Kumar (Vijay Raaz) says, while the other women in the Indian team have made their daily struggles their strength, Mithali’s biggest forte was her technique.

Whoever gets excited by that alone?

The movie, thankfully, delves into detail of the making of the one of the most technically correct batters India has ever produced.

Vijay Raaz excels in the role of a battle-hardened coach, who helps Mithali take her first steps not just on a batting wicket but the realities of sport.

The movie also falls prey to creating antagonists, most of whom are fictitious, to stack the odds higher for their heroine. Be it the brother, a cricket aspirant himself who feels jealous and overshadowed by her success, a traditional and disapproving grandmother, who leaves the house after Mithali gets her first India call-up and disappears from the movie or the members of the Indian team, who bully and berate her during her early days in the national team.

A lot of these added-in characters are used to highlight the real struggles of Indian female athletes, the pressures and prejudices they face.

Noori, whose character is very different from Mithali’s, is forced to get married at the age of 15.

Her India team-mates talk of the economic or social struggles that Indian women face while trying to pursue their sports dreams.

It may be a cliched take but sadly these cases, these stories, are still prevalent in the country.

Even though the story only loosely follows that of Mithali, the first half is an immersive watch.

We break for the interval with possibly the most powerful scene of the movie, where the women, in a cricket federation boardroom full of men, fight for their identity, and not live in the shadow or wear hand-me-down jerseys of the hugely popular men’s team.

But the movie goes completely off the rails and loses all sense of chronology in the second half.

The most problematic passage is the one when, post the act of defiance in the boardroom, she returns home.

Firstly, we don’t know if she is fired or she has resigned.

Secondly, one of the hallmarks of Mithali’s 23-year career was her utter stubbornness to stand her ground, no matter how bad things went.

Her stepping away from the game, conceding defeat, seems out of character for the real Mithali.

While the movie articulates the arc from her days of a cricket novice to her becoming a captain at the age of 22, there is a gaping hole from 2005 to the 2017 World Cup, which was the watershed moment for Indian women’s cricket.

The movie doesn’t even allow a highlight reel for the 2005 World Cup, when Indian women reached the final for the very first time.

Meanwhile, after a massive build-up, the 2017 World Cup, after a mandatory locker room pep talk from Mithali, is dismissed in a whirl of montages.

The archived footage used in this is mashed in jarringly, at times the names of the real Indian team members are visible on the scoreboard when no such characters in the film exists.

At times, you see the real Mithali, and the very next moment she morphs into Taapsee Pannu, playing Mithali.

Despite the glaring misses, two things keep the movie relevant: Taapsee Pannu and the sheer grit of the Mithali Raj story.

Pannu captures the dualism of Mithali, of being a quiet leader.

Mithali Raj was an articulate but largely unemotive captain, whose strength was always staying on an even keel, no matter what the odds or opponents, no matter with how inexperienced the team was.

There is no over-the-top posturing even when delivering the line that has made Mithali a poster girl for gender equality.

Though the movie doesn’t quite do justice to it, it is a story that needed to be told.

Women’s cricket has come a long way since Mithali made her debut in 1999, when it was still an amateur pursuit.

For more than two decades, she has led the sport’s struggle against the administration and indifference — the sheer indignity that the women’s cricket team, despite being a national cricket team, had to face just so they could keep playing.

Through force of character, she brought women’s cricket front and centre.

And that is the message the movie, rightfully, ends on.

With people showering love and attention on the team even though they were not able to win the 2017 World Cup final, of young girls inspired to take up cricket because of idols like Mithali.