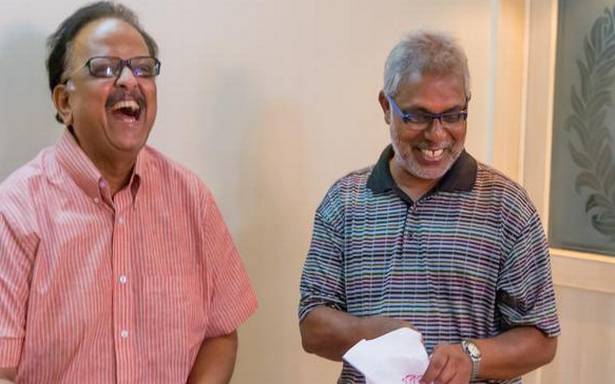 That evening SP Balasubrahmanyam was travelling abroad and I accompanied him to the Madras airport. He wore an elegant white outfit and had a couple of programmes to attend enroute. The car stopped first at eminent ENT surgeon Dr KK Ramalingam’s clinic on Poonamallee High Road for a quick consultation. After that, we proceeded to the Chennapuri Andhra Maha Sabha, near the Central Railway Station.

It was an anniversary celebration and the organisers had invited SPB to felicitate him. The hall was rundown. It had a metal roof and was littered with broken chairs. The stage had no curtains and there were no stage lights either. The audiences as well as the organisers were casually clad in dhotis and shirts with folded sleeves. Once SPB stepped in, they received him with excitement, shouting in a mixture of Tamil-Telugu –English slang, “Aye, thambi arrived, let’s start the programme.” There was no formal reception and no decorum in place. Added to that there was utter confusion on the stage as to who should sit where.

Meanwhile, some persons walked on to the stage unannounced to garland the guest of honour with homemade loosely-knit flowers, without any order of proceedings. What surprised me was there were no speeches at the felicitation. All of them want him to sing. There was a lot of commotion from the auditorium, with shouts, “Mani (SPB’s pet name) you sing that song, you sing this song.” Like their doting friend, SPB smiled and obliged by singing a few lines from each one of their requests. Some of them demanded that he recite padyaalu (poems) from Telugu dramas. He rendered a few from the play Kurukshetram. It was a clumsy, miserable felicitation to the music legend. ‘culture-less fellows,’ I grumbled to myself.

The car pulled out on Mount Road towards the airport. I could not control myself and murmured, “Henceforth do not accept such cheap programmes. They do not know how to behave when someone like you is invited.” He gently touched and pressed my hand. “Please do not talk like that Venu. When I was nobody, these people gave me support and confidence. I used to cycle from Kodamabakkam to this place when they conducted rehearsals for me with harmonium and tabla. I grew up with them, I sang with them. I learnt so much from them, enjoying my passion for singing. They are not rich enough to organise a big event but they have a rich heart. They never came to me for money. They treat me as one among them. They were stepping stones for my present status. How can I turn them down? For me, it is a big moment.”

I was speechless, shrank with shame for my blinkered thinking. The Mount Road looked very narrow and dim…

(The writer is a stage actor, mime artist, friend and long-time associate of SP Balasubrahmanyam.)