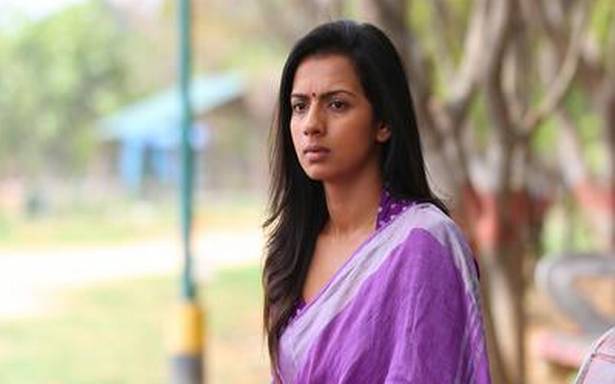 Known for breaking stereotypes on and off screen, Sruthi Hariharan is back on the radar after a two-year hiatus

Sruthi Hariharan has always stunned us with her choice of films and her bold and unconventional roles. Then she got caught in the web of the #MeToo movement and went off the radar, only to emerge in a new avatar as a wife and mother.

That is not all, the actor was soon winning fans with her powerful portrayal in the Tamil web-series, Vadham ( on MX player). Sruthi plays a police inspector who is obsessed with justice.

She is also acting in the Kannada film, Head Bush. Directed by Dhananjay, the film is the biopic of a gangster Jayaraj, written by Agni Sridhar. It also features Vasishta Simha. It is said to be a pan-Indian film, set in the late 60s and 70s.

Sruthi, who started off with films like Lucia, went on to win the National award for Naathicharami. She talks to MetroPlus about marriage, motherhood, cinema and more.

How does it feel to be back after a two-year hiatus, marriage and motherhood?

Nothing has changed for me as a woman and I am not just defined by being a wife and a mother. Professionally too, it was heartening to see quite a few offers come my way once the second lockdown was lifted. In the interim, I worked in an independent film called Saanugaara. It was fun working in this film as my daughter Jaanki accompanied me to the set. Trying to care for another human being that is a part of you and also finding the space to work was an interesting balance to discover.

Now you are a part of the Kannada film Head Bush…

Yes. I was elated as I always wanted to be part of a biopic. It is interesting when you play a true-to-life character on screen. You are not only tapping into your imagination to build the character, but also are trying to get your facts right.

Tell us about your roles in Saanugaara and Head Bush…

In Saanugaara I play a movement artiste. A woman who is love with the pivotal character and how by just being herself, manages to steer him in the right direction. Cliched as it may sound, the story is beautiful and the character I play, Maya, has many layers. The film is directed by debut director Surya Vashishta, whom I have known from my Lucia days.

In Head Bush, I play a woman from the ‘70s. It was a time when patriarchy was at its peak, spear heading every single field, including politics. My character, lived in such a time and yet managed to be heard, made her presence felt and commanded respect. For this role, we are styudying how the women dressed and behaved back then and it makes for an interesting journey.

Yes, there are a lot many women in the film industry today. We see them not just as costume designers anymore but as writers, directors, and DOPs. I believe streaming platforms have opened a whole new world for many of us.

You encountered a serious problem (#me too experience) in the Tamil industry. Yet, you started off your comeback there with the web series called Vadham. How was it to start again with the same industry?

We cannot hold one incident against the entire industry and vice versa. There are people who do understand why a person speaks out about certain incidents. In fact, I found the Tamil industry very welcoming of me. It is not entirely misogynistic, and has provided me with a beautiful place to begin work in. I look forward to working in Tamil cinema as I am a Tamilian raised in Bengaluru. When Vadham came, I was thrilled.

Is there a difference in the workings of cinema and a web series?

Web series is more an in-depth depiction of emotions or the narrative. It also gives you a lot more creative liberties. Even the writing in a web series takes precedence, as every episode has to capture the viewer’s attention. In cinema you look for that one cliffhanger moment…

As an actor, there is not much difference when it comes to emoting on screen, except that OTT breaks stereotypes.

All your roles have been very unconventional, some even with an element of shock to a certain section of the audience. Is that a conscious decision?

Most roles that have come my way have been interesting. I have done the run-of-the-mill kind of cinema too to make money. So I am guilty of running around the trees too. On the other hand, I got to work in films such as Naathicharami and Beautiful Manasugalu… I believe I am lucky to have roles such as these come my way. I believe Lucia sent out the message that I was here to act. That paved the way for me for getting roles that were not always about a damsel in distress.