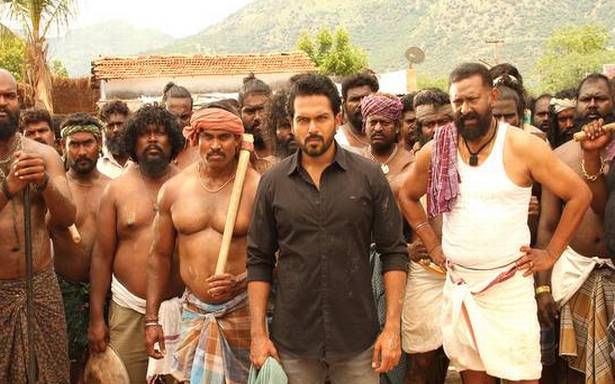 Remember the song ‘Verithanam’ from Bigil? It features Vijay shaking in the middle and a hundred other dancers around him. Or ‘Maari Maaro’ from Boys? In one frame, there are hundreds of musicians drumming a beat with the five protagonists of the film right in the middle.

Now, imagine if all of them stepped next to the hero and brushed shoulders with him for 157 minutes or so. That’s Sulthan for you.

This Karthi-starrer revolves around Vikram (Karthi), though you’d be excused if you miss that name. Everyone calls him ‘Sulthan’. His birth itself is an event; it happens when a fight ensues in a household that is home to a hundred goons. Sulthan is born, and he has to choose between a path of violence and peace.

He chooses the latter. For once, you don’t have a Tamil cinema hero hitting hundred rowdies at once; he’s laughing and joking around with them. He calls them his ‘brothers’. Sulthan is an actual ‘Rowdy Baby’.

Life changes when his dad (Napoleon, in a short role) passes on, and his boys have to travel to a small village near Salem to complete one last ‘assignment’. Will that entail danger, and how does the motley group handle it?

There are several whistle-worthy moments in this mass vehicle that uses tropes from Baahubali and KGF to pull off the grandeur of the idea. A unique fight sequence is designed with a few enemies hatching to attack Sulthan when he’s asleep… with his hundred ‘boys’ sleeping around him. What ensues is a ‘silent fight’, one that happens without any sound except Yuvan Shankar Raja’s thunderous score.

Karthi scores as a person grappling with too many things running in his head and pulls off the larger-than-life moments to a considerable extent. But the fact that you remember quite a few of the ‘lovable’ goons and their actions is what makes Sulthan go one step ahead. The film does veer into predictable Tamil cinema territory when it introduces a corporate conspiracy element, but thankfully, the mass moments keep hitting the right notes.

The romance isn’t the greatest (Rashmika Mandana gets to play a rural belle), but even there, there is some purpose to its existence to the core plotline. If Yuvan’s background score and Sathyan Sooryan’s cinematography are major highlights, so are the songs; Vivek-Mervin’s hummable numbers prove that the musical duo have it in them to take on bigger projects.

Director Bakkiyaraj Kannan has managed to weave in an engaging storyline taking two of Tamil cinema’s pet topics: rowdyism and farming. He goes overboard in the second half on a few instances — a couple of sluggish sequences and a song that could have been done away with — but keeps inserting ‘commercial ideas’ to keep the interest afloat.

Sulthan is a theatre film without doubt. One wonders if the slow-motion mass moments will work for someone watching it on an OTT platform in the comforts of their homes, but on the big screen, this Karthi-starrer packs a fantastic punch.

Sulthan is currently running in theatres