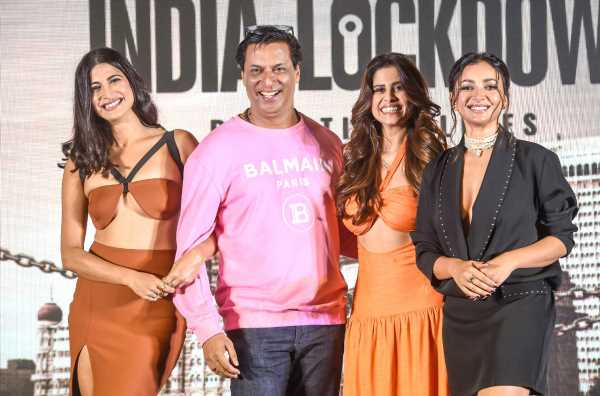 ‘My film will not only be a reminder for all of us who have gone through these hellish two years, but also a reference point for future generations and for the four-five year olds who would have forgotten everything by the time they grow up.’ His is a name that immediately brings to mind hard-hitting, true-to-life films like Chandni Bar, Page 3, Traffic Signal and Fashion.

Madhur Bhandarkar is now gearing up for the premiere of his next film, India Lockdown, at the International Film Festival of India that flags off in Goa from November 20.

A gung-ho Bhandarkar tells Rediff.com Senior Contributor Roshmila Bhattacharya, “The beauty of this film is that the characters seamlessly merge into each other to present a cohesive picture of India during the first few weeks of the first lockdown.”

The idea of India Lockdown must have come to you when you were locked in your own home during the lockdown?

Yes, during the first lockdown.

I was reading a lot, watching the news on TV, listening to what was happening around me, it was heart-wrenching!

Everyday there was a new calamity, a new story.

Thats when the idea of making a film on how the lockdown was affecting different segments and stratas of society came to me.

I was fascinated by the idea of documenting the lockdown, the first 30-40 days.

It seemed like almost overnight, following the announcement on March 24, 2020, of a complete lockdown of the entire country for 21 days to curb the fast-growing spread of the coronavirus-triggered pandemic. Normal life ground to a standstill.

From among all the many stories of the lockdown, what made you zero on four?

There were many stories, but I was not making a Web series.

I wanted to make a compact film which would make an impact.

And these were stories I had seen happen for real.

I knew of a person stuck at home, alone.

I had interacted with the migrant workers left jobless in cities, who, in desperation, had set out on a long journey home, back to their villages.

I had read an article on the struggles of sex workers, who, not knowing where their next meal was coming from, had started organising langars (community meals) in Kamathipura (Mumbai’s so-called ‘red area’).

There was enough about parents and children separated by an errant virus, some unable to even say their final goodbyes.

India Lockdown is a small-budget film which my friend (Pranav Jain) and I have produced together.

It is a hard-hitting story, encapsulating real emotions and featuring some really talented actors.

How long did it take to write the film?

It took us three months to get it right.

We started in August 2020. My writers were only partially happy with the first draft while I was completely dissatisfied.

So we rewrote it.

It was a tough job because even though the film has four narrative tracks, they are not independent stories but inter-connected.

India Lockdown is not an anthology.

The beauty of this film is that the characters seamlessly merge into each other to present a cohesive picture of India during the first few weeks of the first lockdown. The film will have its IFFI premiere in Goa. How does it feel to be able to showcase it before its release on ZEE5 on December 2?

I’m delighted that IFFI has given me this huge platform.

I’m looking forward to walking the red carpet with my lead actors, Shweta Basu Prasad, Aahana Kumra, Prateik Babbar and Sai Tamhalkar, and watching the film with the audience for the first time.

Ever since the news of the gala premiere came out, I’ve been flooded with calls from Mumbai, Delhi and Goa.

People not only want to attend the IFFI screening, but want to bring along guests.

I’m guessing the excitement will mount after the trailer release.

I have to remind them that it’s only one screening and going by the overwhelming response, we will have to have more screenings in Mumbai and Delhi.

After two years, people had started to forget the pandemic and the lockdown.

Yes. But as soon as the teaser was out, #IndiaLockdown started trending on Twitter.

When they realised it was a film, friends and colleagues, from India and abroad, started calling to say India Lockdown brought back memories of those dark days, weeks and months.

My film will not only be a reminder for all of us who have gone through these hellish two years but also a reference point for future generations and for the four-five year olds who would have forgotten everything by the time they grow up.

They will never believe India experienced anything like this until they see it for themselves.

India Lockdown is the first film on the early days of the lockdown in our country and given how big OTT is today, I know it will have a long shelf life.

I lost some friends to the disease and it was heart-breaking.

But it was also heart-warming that other friends whom I had not met in 20 years, along with family members I had lost touch with, I was able to establish connection with again through Zoom calls.

Then there were the films, two to three in a day.

I have a home theatre at home and with no calls to take me away, I could watch my films and documentaries in peace.

It was a happy rewind to Gone With The Wind, Ten Commandments, Ben-Hur, The Godfather…

I had watched these classics earlier on TV or on home video, but now, I got to see a proper print on Blu-Ray or OTT. Who were your picks from the Indian film-makers?

I watched Sohrab Modi’s Kundan and Pukar on the big screen for the first time, mazaa aa gaya.

Then, there was Namak Halal, Amar Akbar Anthony and Nayakan.

The best part is that I introduced my daughter Siddhi, who was 14 at the time, to superstars of the ’80s and some of their landmark films.

I am a huge film buff and even today, every week, I watch one random film that not many have even heard of.

I download it on my Ipad and it keeps me entertained on a drive or a flight.

It is directed by Naresh Kumar, who four years later made Do Jasoos with Raj Kapoor and Rajendra Kumar playing two middle-aged, bumbling Private Investigators.

In 1982, he directed Gopichand Jasoos, this time with Raj Kapoor alone as a detective on the hunt for stolen diamonds.

While those two films were comedies, Ek Paheli was a rather spooky, ghost story, a really good film.

What did your daughter think of the ’80s platter?

She is the Netflix generation, growing up on Squid Games, and was fascinated by the concept of three brothers separated in their childhood, growing up in different homes and reuniting in the climax.

So I introduced her Naseeb, this one a story of destiny, reuniting a father with his sons after years.

I didn’t want Madhur Bhandarkar’s daughter to be cinema illiterate.

She may be the one recommending what I should watch, but I also want her to know our milestone films and film-maker greats. Well, now she knows all about Hindi cinema’s lost-and-found formula for success.

(Laughs) Yes, and Amar Akbar Anthony was just a blast that she wanted to see the film in the theatre during the recent retrospective as part of Mr Bachchan’s 80th birthday celebrations.

Unfortunately, she had an exam the next day, so her mother wouldn’t allow her to go see a movie, but I went to watch it.

The next morning, I woke up early to catch Don and the night after, it was Namak Halal.

A hat-trick of Bachchan classics!

It’s my most cherished possession and I have burnt so many copies of it and given away copies to friends. 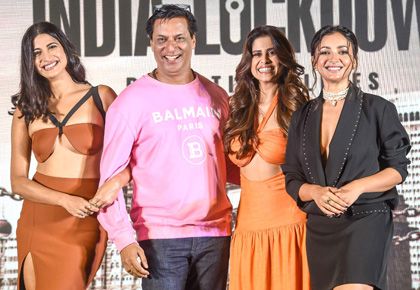