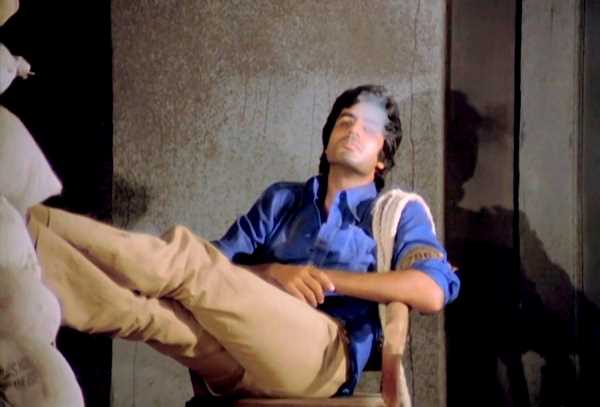 From painting the screen in scenic splendours and chiffon soft romances to delving in the dark, grey areas of human behaviour and ardour, his versatility across all genres enthralled an audience a little over five decades.

A true embodiment of style and substance, the film-maker and founder of the Yash Raj Films brand would have turned 90 on September 27.

On his birth anniversary, Sukanya Verma lists 20 of her favourite scenes that reiterate his extraordinary grasp on the language of cinema and connect with the viewer.

The enormity of the emotions and conflicts that bound and break Vijay, Ravi and Maa are inexplicably deep-rooted in our collective psyche.

Deewar is one of Yash Chopra and writer-duo Salim-Javed’s most definitive works and filled with one incredible scene after another.

I’ll limit it to four.

1. ‘Mere paas Maa hai’ may be the ultimate in last word, but it’s Vijay’s unabashed swagger — legs crossed atop a table, beedi between lips, knotted shirt, when he quips, ‘Tum log mujhe dhoond rahe ho aur main tumhara yahan intezar kar raha hoon’ and proceeds to pummel Peter and crooks within a locked warehouse for a good five minutes — that has my heart and whistle. 2. Dialogue delivery becomes Deewar and the sheer cool in Amitabh Bachchan’s tone every time he makes his resentment clear renders the blow all the more hard.

Iftekhar’s Daavar gets a taste of it when he casually flings a pile of cash in Vijay’s direction. The gesture has hurt his pride but instead of telling the boss right away, he recalls a childhood memory when Daavar had committed the same mistake before concluding, ‘Main aaj bhi phenke hue paise nahi uthata.’

A life lesson I’ve held on to steadfastly since. 3. I have a soft corner for the moment when Vijay, finally, decides to end his atheist stance and set foot inside the temple and underline his love-hate relationship with God while demanding to save his ailing mom.

Bachchan’s unmistakable bitterness as he appeals before the idol conveys a staggering mix of anguish, anger and desperation in a memorable monologue, which begins with the wry ‘Aaj khush toh bahut honge tum‘ and ends in an heartfelt, ‘Meri maa mujhe wapas de do.’ 4. The conflict between brothers on different sides of the law hits a peak when Ravi asks Vijay to sign a confession admitting to his crimes. While we totally feel for Ravi’s ethical dilemma, Vijay’s disgruntlement is equally understandable. He has been through too much, of which his goody-two-shoes sibling has no idea. 5. Speaking of Maa, Chopra’s Trishul has one too.

Only here, Waheeda Rehman’s wronged mother sets the stage for a revenge story.

What makes things all the more exciting is the settling of scores is by a son against the man who dumped him and his mum for money.

All through Trishul, Bachchan’s Vijay leaves no stone unturned to destroy his illegitimate father or Mr R K Gupta (Sanjeev Kumar) as he is caustically addressed by him in the movie.

And when Vijay’s finally achieved everything he set out to fight for — R K Gupta’s wealth, reputation, extended family — he drops in to see the latter, all defeated and deserted occupying a dark, empty corner of his room, and delivers that one final bombshell: ‘Main us abhagin Shanti ka beta hoon, Mr RK Gupta aur aap mere najayaz baap hain.’ 6. Yet another scene from Chopra’s superbly simmering Trishul captures these two towering talents at their intense best.

It’s the first time they are coming across each other, face to face.

Vijay is a mix of emotions, but his indignation refuses to reveal any emotion. R K Gupta is fascinated by his reckless skills and shrewd confidence. 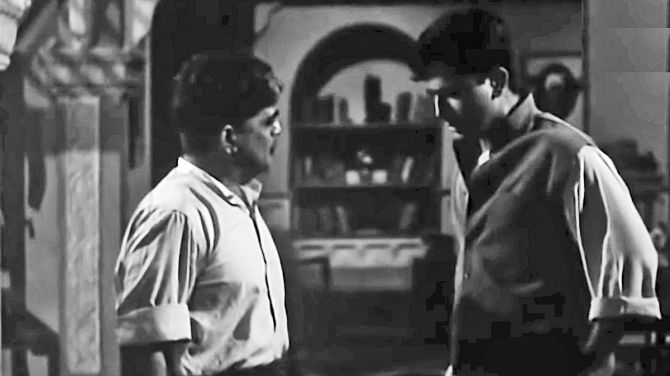 Although it’s only his second film, Chopra displays the competence of a seasoned film-maker in communicating both the magnitude and futility of prejudice.

One of my favourite scenes in this film, more relevant now than ever, is a heated exchange between a sensible physician (Manmohan Krishna) and his foster son, a Hindu fanatic (Shashi Kapoor playing an extremist oblivious to the fact that he’s adopted and Muslim by birth) after the latter resents the idea of a Muslim taking refuge in their home.

If only every budding bigot had a dad like this to cut him (and ilk) down to size. Next, he walks over to the nearest henchman in sight (in this case a knife-sharpening Madan Puri) and mouths these iconic words in his trademark baritone, ‘Yeh bachhon ke khelne ki cheez nahi. Haath kat jaaye toh khoon nikal aata hai‘ and walks away with an invisible cowboy hat on an invisible horse.

This is the original cool, people. (Sridevi’s parody in Chaalbaaz comes a close second.) 9. In Chopra’s songless whodunit starring Rajesh Khanna and Nanda, Ittefaq heavily relies on the build-up and chemistry between its lead co-stars.

Things would easily spiral downwards if they failed to engage, but the director maintains a curious momentum between Khanna’s compelling fugitive and Nanda’s mysterious host.

Given the utterly stressful circumstances, an outburst from both the sides is inevitable.

Their newfound understanding to coexist would come across as bizarre if not for the conviction of those in and behind the scenes. 10. Easily one of his most under-rated efforts, Chopra’s Kaala Patthar has just as much to offer as the more recognised ones. And as much as I appreciate Bachchan’s silent strength and Shashi Kapoor’s fervour, it’s Shatrughan Sinha’s swagger that gets my vote.

Remember that scene where he’s playing cards with Mac Mohan in a dingy tea shop while drumming his fingers to Tadbeer se bigdi hui taqdeer (Baazi) playing in the backdrop.

He’s got a King of Hearts, King of Clubs and Two of Clubs. Confidently, he gambles a good 100 bucks and claims, ‘Humare paas hain bhaiya, teen badhshah.’

In case you’re wondering about the third one, pat comes the reply, ‘Teesre badshah hum hain.’

Needless to say, Shotgun walks away with THE loot and THE line. 11. It’s Advantage Shatru yet again when the Big B has to bear the brunt of his impish temper as part of their two swords, one sheath equation.

Twisting the arm of the co-worker holding a lighter against Bachchan’s cigarette to light his own is hilariously petty and badass at once.

How we miss this sort of two-hero camaraderie in Hindi movies of today. There’s a lovely moment when Raakhee and Amitabh Bachchan come face to face years after their painful breakup.

Although they have gone their separate ways to raise a happy family of their own, that lingering sense of romantic loss is imprinted on their being.

A mix of genuine awkwardness and suppressed hurt is beautifully essayed in this subtle, classy scene where a flustered Raakhee records a television interview with a still aggrieved AB. It’s all there in this line below: 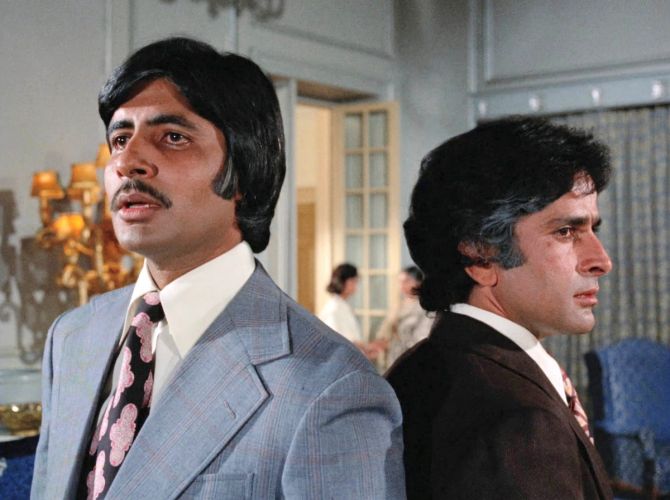 13. Past loves and present insecurities are highlighted as Shashi Kapoor, Amitabh Bachchan, Raakhee and Waheeda Rehman meet over dinner and drinks in yet another classic scene of Kabhi Kabhie.

Ever so insightful on the matter of romance and relationships, Chopra’s poetic depiction of uncomfortable revelations is an exercise in grace.

No sooner have we finished cheering for Shashi Kapoor’s honest acknowledgment of his momentary jealousy, AB affirms the courage it took in surviving the loss of his love and muse. ‘Daag daaman pe nahi dil pe liya hai maine.’

14. Chopra’s take on yet another situation where former lovers meet each other after a relatively shorter break is engaging too.

It’s a tricky setting, previously restricted to the wheelchair, Rishi Kapoor ended things on a rather nasty note with Sridevi, forcing her to move to Mumbai from Delhi and reluctantly agreeing to Vinod Khanna’s proposal.

Oblivious to all these developments, a now perfectly fit and walking Rishi heads to surprise Sri and win her back into his life.

True to his character’s nature, he’s charm personified and apologetic too.

It’s like they never broke up, the chemistry is fantastic.

But its that blend of astonishment, elation and hurt on his visibly restrained (and GORGEOUS) object of affection that speaks volumes of her calibre and this scene. 15. One of the things I truly appreciate about Chopra’s characters is just how refined they are even in the most dreadful hours.

While Silsila gathered attention for casting Amitabh and Jaya Bachchan along with Rekha in a love quadrangle, it’s Sanjeev Kumar’s dignified stance that does it for me.

Quite aware about his wife’s (Rekha) indiscretions, he delicately hints her to reconsider their marriage during a lovely airport scene.

He doesn’t say much except make up for the lack of communication, politely reminding her about the telephone bill, sick gardener’s wife and urgent mail/ message and a signed cheque.

But before he is ‘ready for departure’ he, hoping against hope, inquires if she’ll be around to receive him on return.

16. In an interview to a publication, Sridevi mentioned her aversion to the climax of Lamhe.

Sri may not have agreed to it, I wouldn’t want it to end any other way.

It’s also my favourite scene from this all-time favourite.

After spurning off the younger Sridevi and admitting he used to be in love with her lookalike mother, Anil Kapoor realises he needs to get out of denial.

And they lived happily ever after.

17. Yash Chopra’s ‘violent love story’ of a stuttering stalker wreaking havoc in his former classmate and her beau’s life is as glamorous as it is grisly.

One of the best bits involves an extensive, frantic chase between Sunny Deol and Shah Rukh Khan across narrow alleys and crowded streets of suburban Mumbai against a feverish tabla score.

Its raw, stylish vigour and urgency has the viewer at the edge of their seat.

18. They’ve worked in a bunch of movies, but SRK and Madhuri’s chemistry in DTPH is another league of hot.

The screen burns away in glory as he seduces Mads, cutting a sensual picture in her all-white dreamy ensemble, with his ‘aur paas‘ requests. 19. I was never a big fan of one of the most famous scenes of Mashaal.

But post-pandemic, I see it in a completely different light.

It’s like I wrote in my piece celebrating 25 Unforgettable Frames of Dilip Kumar, ‘when the second wave of coronavirus hit India and turned the nation into a desperate cry for oxygen and beds, Dilip Kumar’s hysterical pleas to find help for his ailing wife lying on the street hard ceased to feel overstated anymore.’ 20. Jab Tak Hai Jaan isn’t the perfect swan song, but the sight of Yash Chopra — one of the most ubiquitous figures in the Hindi film industry — calling the shots, warmly hugging his actors, quietly sitting on the director’s chair under the big blue sky in the end credits always makes me emotional.

But there was something so lived-in and lyrical about the way he visualised life and all its wonders and woes, a quality that finds rich ode in Jab Tak Hai Jaan‘s closing credits title song.