As per reports, the couple, who will tie the knot on December 9, are already done with their mehendi ceremony on Tuesday and are looking forward to a Punjabi style sangeet night on Wednesday.

Veena also shared a picture on her Instagram Story along with the caption: ‘Finally we did it. #bigfatindianwedding. Now move to my next destination.’

Last night, the luxury wedding venue had lit up in red and yellow colours for the grand celebration.

Several celebrity guests have already arrived in Jaipur to be a part of the festivities.

On Tuesday, Dhoom 3 director Vijay Krishna Acharya was seen at the Jaipur airport.

Neha Dhupia-Angad Bedi as well as Radhika Madan were among the early arrivals.

Katrina and Vicky, fondly called by fans as VicKat, were spotted flying out of Mumbai on Monday for their destination wedding. 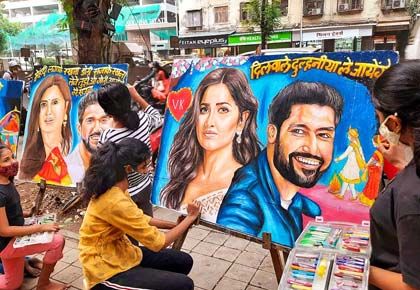