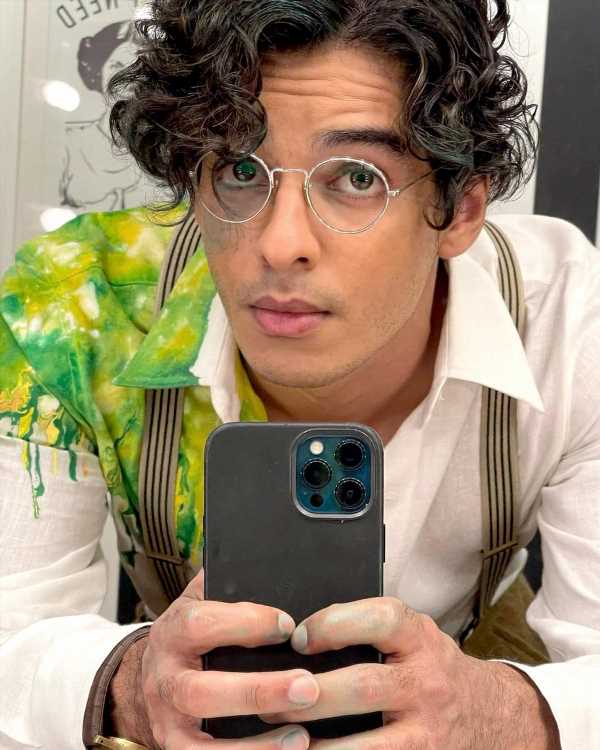 ‘Comedy and humour are important tools and open the hearts of people.’
‘Anything that brings a smile on somebody’s face has merit.’

Ishaan Khatter is excited that Phone Bhoot is getting a theatrical release — his last film Khaali Peeli (2020) premiered on OTT when COVID-19 was at its peak.

Though Ishaan, who celebrates his birthday on November 1, does not seek Shahid Kapoor’s suggestions when it comes to script selection, he cherishes his elder brother’s presence in his life.

“He and I have become more like confidants and friends now because we have grown up. Earlier, he was very much like, ‘Listen to what I am saying.’ Now he likes to listen to what I have to say as well,” Ishaan tells Rediff.com Contributor Mohnish Singh.

You are working with Katrina Kaif for the first time. Were you ever starstruck by her presence? Do you remember your first day on set?

Yeah, I remember it very vividly.

I was really looking forward to working with her.

I seldom get starstruck because it’s just how my personality is.

But I was reminded that I had danced as a background dancer with her, so I have seen her from that perspective.

It was full circle for me to be working with her in that capacity.

She doesn’t carry the weight of her seniority to the sets.

She is very cool.

She has a wicked sense of humour, which you get to see a glimpse of in this film, and she is having a lot of fun at the cost of herself in this film, which is great.

Phone Bhoot is the kind of film that doesn’t take itself too seriously, and so we all took note of that and didn’t take ourselves too seriously.

We had fun with the material and tried to lift it off the page.

Katrina is very professional. She knows her lines and works on them constantly.

She is always prepared.

She has her own set of ideas that comes up with for the character.

I think Katrina’s humour is so subtle. She might just prank us and we won’t even know about it.

She’s not a prankster in that traditional way. 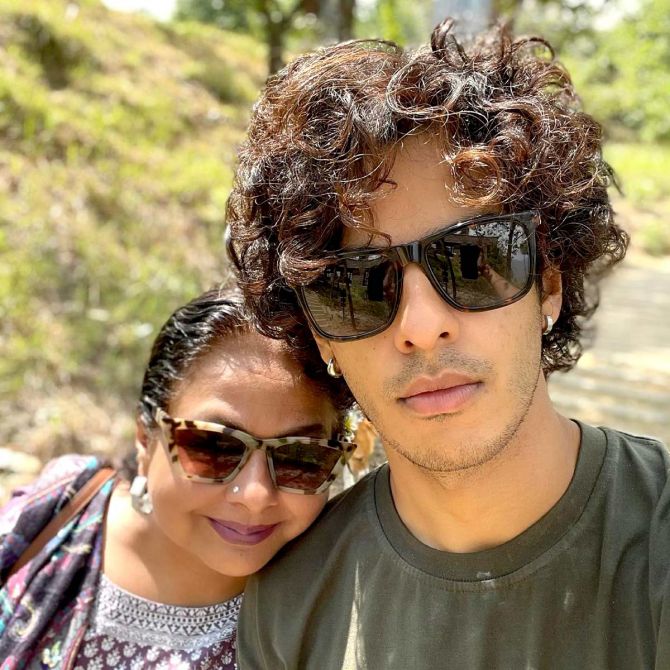 Your family is full of actors. Do you discuss your scripts with them?

My closest confidantes are my mother and my brother.

My brother in a very different way, but my mom is my go-to person.

I have had my entire journey of growing up as a cinephile, then as a young actor, and now I am still very young in my career.

She is the first person I share things with.

Now I am trying to tread my path a little bit and surprise her because she is also my first audience.

If I can expand on this, my mother actually, when she saw my first film (Beyond The Clouds) for the first time at BFI (the British Film Institute), was surprised.

There was this big premiere at the London Film Festival.

I saw the film for the first time as well with an audience of 1,000 people, and all I wanted to know was what my mom thought about my performance.

She was there with me and she came out of the theatre and was like, ‘Who are you?’

And that was it for me.

I get goosebumps even saying that right now.

She knows me the best, and for her to say that was the biggest compliment to me.

So I am just trying to get that feeling again and I just want her to be like, ‘Who are you?’

So my mom comes first.

He and I have become more like confidants and friends now because we have grown up.

Earlier, he was very much like, ‘Listen to what I am saying.’

Now he likes to listen to what I have to say as well.

I cherish his opinion and his presence in my life. 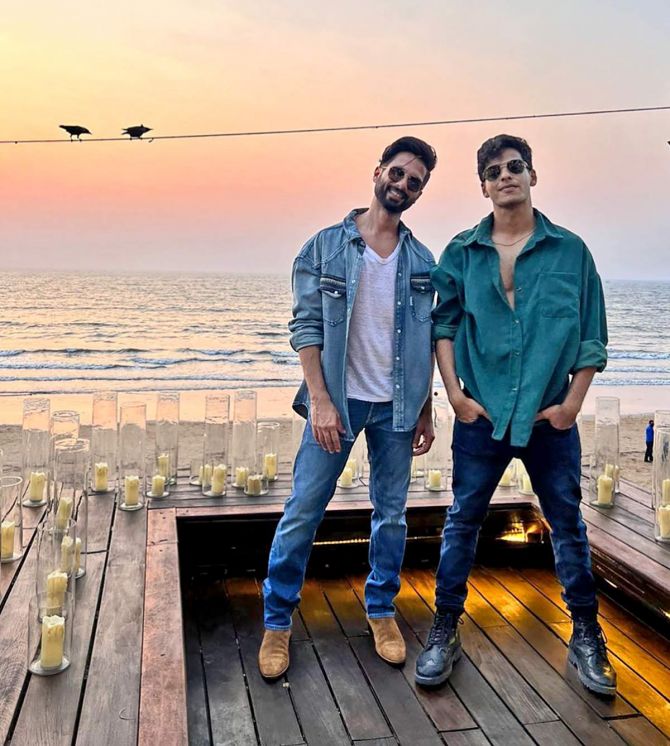 Have you ever encountered any paranormal activity?

I am a horror film buff and have also done some stupid things with my friends where we used to go into some ‘haunted bungalow’ or an under-construction building at night just to see. But to date, we haven’t found anything.

We have some extremely spooky characters in this film. So I think, for now, our cup is full with Phone Booth‘s bhoot.

Do you believe in ghosts?

I have no reason to believe in them, but I do believe there are energies.

I do believe in the spirit.

It is not out of the question that the spirit can be detached from the body and still, you know, roam the earth.

I mean, maybe someday I’ll come to you and say, ‘Listen…’ but that hasn’t happened yet. What would you like to do if you become a ghost?

The day it happens, I will definitely make a serious horror film.

Shahid Kapoor and you are great dancers. Has he given you any tips?

Instead of tips, you know, I would say that he has always inspired me in some way or the other.

Like by leading by example, being the fantastic dancer that he is.

He works on it and shows how graceful he is.

He has been trained, of course, for many years with Shiamak Davar, and I have had some training myself.

So I know the beats that he has been through but he has his own process when he dances.

I have watched him in awe and learned like that.

He has also inspired me by sending me interesting things, like these French twins, who are like my dance idols, that I have been following for many years, nearly 10 years.

He introduced me to them; he showed me their videos, and then he forgot about it.

They are twins. They are beautiful dancers. They are my favourite Western dancers.

So he has always inspired me and sent me, you know, things to push myself forward.

We danced together, and we love dancing together, because there is no exchange of words, only movement. It’s so much fun because the synergy is in your DNA. You said you are a horror movie buff. Do you believe Bollywood should return to making the kind of horror films that the Ramsay Brothers once did?

As an audience, I would love to see horror films.

And as an artist, I would love to partake in horror films because it’s a very potent genre.

It has a very strong effect on the audience, right?

In horror films, what usually happens is that they have a lot of jump scares. So there is a release of fear, and after that, you laugh at it. The tension gets released.

But a lot of films don’t give you those jump scares and they creep under your skin and you can’t forget them, you know.

I think I have a morbid and dark side to me, so I would love to explore that genre, as an actor and as a film person in general.

They are so obsessed with it that they are actually a nuisance to the ghosts.

The ghosts want to scare them, but they are in awe of ghosts because they are huge fans. In recent times, it has been observed that people are getting offended by comedy a lot. What is your take on the present comedy scenario and how do you deal with trolls?

To answer the first part of your question, if you cannot frame your words properly, how can you bring any change?

And if you can’t say something and have a sense of humour about it, how will society progress forward?

Comedy and humour are important tools and open the hearts of people.

So you can talk about a serious issue with the help of comedy or you can make something that is for entertainment. Anything that brings a smile on somebody’s face has merit.

I think that we need more laughter in the world.

I don’t think comedy should be banned, cancelled or suppressed.

Comedy should be encouraged.

Only if you have a lot of leisure time in your life do you get offended easily.

As for the trolls, I have had my phases with them.

You know, I started very young as an actor.

I always knew how I felt about it, but still, if you read too much of something or listen to something, it can affect you.

It starts playing on your mind. 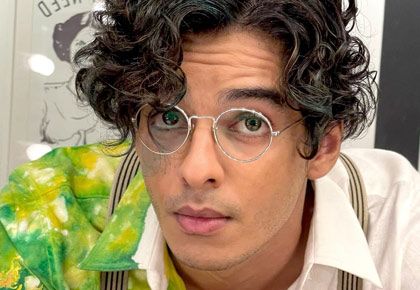