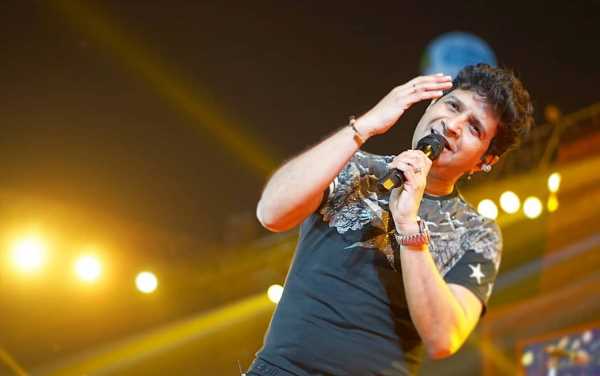 ‘There was so much grace, depth and serenity in him.’ 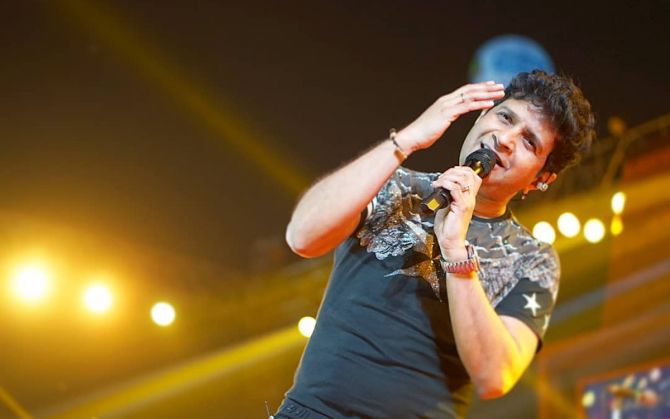 He has won the National Award twice for Sudhir Mishra’s Dharavi and Pankaj Advani’s Sunday.

He has also scored the music and created the sound design for around 8,000 ad jingles and public service films, with KK singing for at least a hundred of them, including Pepsi’s 1998 Dil Maange More campaign.

Speaking to Rediff.com‘s Senior Contributor Roshmila Bhattacharya, Rajat recalls, “The Pepsi ad was the first step in his long and successful journey.”

Back in the ’90s, Pepsi had approached HTA (the advertising agency, Hindustan Thompson Associates) to resurrect them in the market.

The ‘Dil Maange More‘ slogan was created by Anuja Chauhan, who tweaked it from Pepsi’s global mantra, ‘Ask for more’, going beyond the fizzy to demand more from life.

Prahlad Kakkar was roped in to direct the film and the agency came to Rajiv Kenkre and me for the music.

I came up with a scratch for the shoot, and handed the tune to my programmer, Rupert Fernandes, to arrange.

Then I began looking for my ‘voice’.

I had heard some of KK’s demo tapes earlier, and had been looking for an opportunity to collaborate. I knew instantly that this contemporary pop-rock tune was perfect for him.

He had a three-octave range, could effortlessly go from a husky, soulful rendition to a high-pitched, rock-ish roar, without sounding out of sync or forced despite not being a trained singer.

We located him in Andheri (north west Mumbai) and recorded with him.

…And KK dubbed for Shahid Kapoor

The ‘Dil Maange More‘ campaign, which released in 1998, featured a young Shahid Kapoor, who was still in college then, along with Shah Rukh Khan, Kajol and Rani Mukerji, the stars of Karan Johar’s just-released blockbuster Kuch Kuch Hota Hai.

It was a high-energy, extended dance sequence, with Shahid coming out of a film screening and the theatre wanting more.

As he moodily kicks the Pepsi can, much to his delight, Rani steps out of the screen to groove with him and a crowd of bystanders.

Then, Shah Rukh drives up in a Pepsi truck, draws the two of them up to the roof, turning it into a makeshift concert stage for them.

Their impromptu street gig is interrupted when with the screech of the familiar police siren, a motorcycle draws up.

The cop turns out to be Kajol under the helmet, who whisks Shahid away for more fun and frolic.

The ad starts with a dialogue, and though Shahid came to the studio, he couldn’t give me the ringing tone I wanted.

So KK dubbed for him, and I realised immediately that this boy was blessed with an innate theatrical talent.

The jingle was half in Hindi and half in English, with KK singing the English portions.

As soon as it was released, ‘Dil Maange More‘ became the catchphrase of the nation.

And KK, who had moved from Delhi to Mumbai in search of opportunities to further his career, was flooded with more jingles.

Today, I have the satisfaction of knowing that the Pepsi ad was the first step in his long and successful journey.

Crooning a jingle for a magazine in seven languages 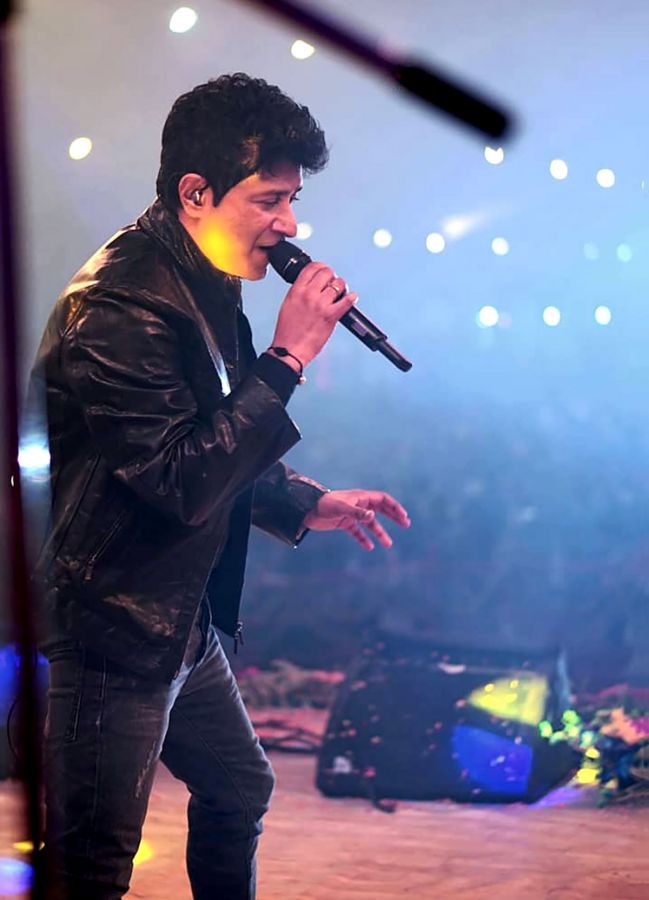 Even back then, KK was an intuitive singer, with a student’s eagerness to learn.

He had played the drums when he was in college and had his own band, so he could rock such high-energy jingles with aplomb.

But he was just as effective with soulful songs like Pyaar Ke Pal from his solo indie studio album Pal, whose philosophical meanderings perhaps reflecting his own.

I composed one such soft, philosophical, song to promote a magazine Vanita and KK sang it in eight languages, including his mother tongue Malayalam.

He did it in just an hour-and-a-half, impressing the diction trainers with his perfect pronunciation even if the language was alien to him.

I knew then that this boy was truly gifted and became a lifelong fan.

KK’s songs reflected his nature, full of simplicity and positivity.

There was no classical acrobatics or melodrama, they came straight from the heart or perhaps the soul.

Back then, I was deluged with work, composing five-six tracks a day.

I would rush from one studio to the next, setting the music while watching the film, because deadlines ranged from 24-48 hours.

In this scenario, it was a relief to get KK.

He would bounce into the studio with his usual sunny smile and a cheerful, ‘Hi, howdy’, listen to the song scratch four-five times, practice on his own, then walk up to the mic and give me a perfect rendition.

Only once, there was a problem.

In 2003-2004, I had approached him with a contemporary ghazal-based track for a chocolate brand.

I instructed him to mould his voice in a particular way.

He attempted twice before taking me aside and confessing, ‘Juku (my pet name), this is not my forte, yaar, I’m not singing this song.’

I understood he was not comfortable and sitting down with the arranger, we tweaked the song, so it was more him.

KK had a distinctive style and it worked brilliantly for him.

He gave Bollywood a new sound Back then, I lived in Santa Cruz (north west Mumbai), and after a recording session, on his way home to Andheri, KK, who had just bought a car, would drop me off sometimes.

Pal had been released by then and his career had rocketed.

More work was coming his way and having married his childhood sweetheart Jyothy, he was looking to move into a bigger home.

I was confident he would be very successful because no matter who the composer, when KK sang a song, it became his.

Along with rock-ish tracks, he also sang many soulful melodies, infusing them with an energetic beat and rhythm, and giving them a philosophical touch.

As a result, even if they spoke of love lost, like Pyaar Ke Pal, they didn’t make you melancholic.

That’s the kind of person KK was too.

There was so much grace, depth and serenity in him.

In all the years that we worked together, I have never seen him depressed.

He was always cheerful, his smile never slipped.

‘I didn’t sleep a wink on Tuesday night, his songs were constantly playing in my ears…’ Whenever I liked a song, I would call him.

There were so many I liked.

I also attended a few of his live concerts.

He brought a pulsating energy to the stage, never still, moving constantly, bringing the screaming audience to their feet.

It’s not easy performing live for two hours, but KK was in his element, crooning one song after another on public demand.

Who would have thought that that concert would be his last?

I couldn’t believe it when I heard the news and called (singer-composer) Salim Merchant who confirmed that KK was gone.

Soon after, singer Vijay Prakash called me, with the same question, ‘Is it true?’ and this time I was the one to confirm it.

I didn’t sleep a wink on Tuesday night, his songs were constantly playing in my ears.

‘I have never attended such a beautiful funeral’ On Thursday, the day of the funeral, I was outside his house at 9 a. The antim darshan was to start only at 10.30 am.

I was still numbed by the unbearable loss.

I waited quietly till a singer I knew, Hansika Iyer, arrived and we went in together.

Security was tight, but the hall where the coffin was placed was a peaceful haven.

There were white flowers everywhere. Instead of mantras and shlokas, KK’s songs were playing softly.

As I sat there, listening to him, looking at his sleeping face, I experienced the same sense of peace he always brought to the studio with him.

Slowly, others started trickling in… Hariharan, Shreya Ghoshal, Alka Yagnik, Javed Akhtar who despite a bad back came with Shankar Mahadevan…

At exactly 12.30 pm, the nantim yatra to the Versova Hindu cemetery started.

KK was cremated traditionally, on a wooden pyre.

There was respectful, pindrop silence at the cremation ground too.

No one was wailing or even sobbing loudly.

It was so quiet, the only sound one heard was the breaking of the matka by his son Nakul during the last rites and the occasional shout of, ‘KK amar rahe.’

Around 1.45 pm, silently paying their condolences to his wife, son and daughter Tamara who stood quietly with folded hands, the burning pyre behind them, people started filing out.

Again, there was no chaos, no chatter.

I have never attended such a beautiful funeral.

It was as the world was bidding farewell to a saint, a beautiful soul, whose voice will never be silenced. 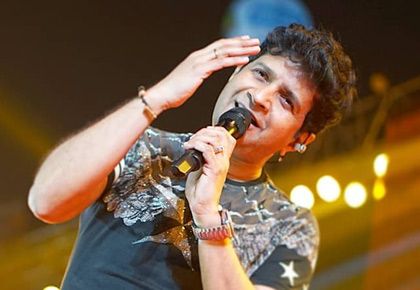