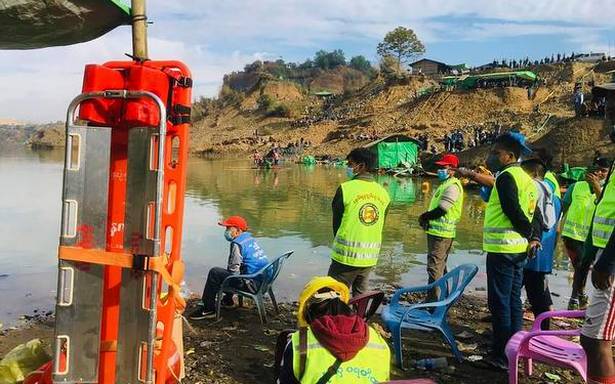 A landslide at a remote jade mine in northern Myanmar’s Kachin state killed one person and left at least 70 missing on Wednesday and a search and rescue operation was under way, rescue officials said.

Hpakant is the center of the world’s biggest and most lucrative jade mining industry.

Gayunar Rescue Team official Nyo Chaw said more than 70 miners who were digging for jade were swept into a lake a couple of hours before dawn when the landslide hit. Earth and waste from several mines around Lonekhin village slid 60 meters down a cliff and struck the miners, he said.

At least five women and three small shops were also buried. The body of a jade worker was unearthed from heavy mud by midday, Nyo Chaw said.

“About 150 rescue workers and firefighters are searching for the area and we have found the body of a jade miner so far and keep finding others,” Nyo Chaw said.

Hpakant is a mountainous and remote area in Kachin state, 950 kilometers north of Myanmar’s biggest city, Yangon. A ceasefire in the region has been disrupted since a February 1 coup ousted Aung San Suu Kyi and her elected government.

It has some of world’s richest jade deposits, making the industry a hotbed for corruption.

The military has said it shut down jade mining in Hpakant, but some companies have been operating illegally. The mines are also a main source of revenue for the Kachin ethnic armed group-Kachin Independence Army based in Kachin state.

According to an official of a civil society group in Hpakant, who asked not to be named fearing his safety, between 20 and 50 mining companies have been operating illegal mines.

Safety has long been a concern, and the suspension of licensing in recent years has sparred a rush of artisanal mining under even worse conditions.

On July 3, 2020, at least 162 people died in a landslide in the same area, while a November 2015 accident left 113 dead. In that case, the victims died when a 60-meter-high mountain of earth and waste discarded by several mines collapsed in the middle of the night, covering more than 70 huts where miners were sleeping.

Those killed in such accidents are usually freelance miners who settle near giant mounds of discarded earth that has been excavated by heavy machinery. The freelancers who scavenge for bits of jade usually work and live in abandoned mining pits at the base of the mounds of earth, which become particularly unstable during the rainy season.

Most scavengers are unregistered migrants from other areas, making it hard to determine exactly how many people are actually missing after such accidents and in many cases leaving the relatives of the dead in their home villages unaware of their fate.