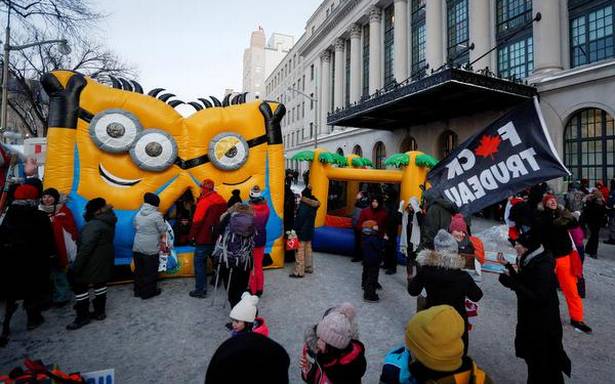 More demonstrators poured onto the streets of Ottawa and other Canadian cities on Saturday demanding an end to COVID-19 vaccine mandates, as protests against pandemic restrictions entered their second week.

In the capital, demonstrators huddled around campfires in bone-chilling temperatures and erected portable saunas and bouncy castles for kids outside Parliament, while waving Canadian flags and shouting anti-government slogans.

Their chants of “freedom” were met with cries of “go home” by a smaller group of counter-protestors fed up with the week-long occupation of the capital.

The atmosphere, however, appeared more festive — with dancing and fireworks — than a week earlier, when several protesters waved Confederate flags and Nazi symbols and clashed with locals.

The demonstrations, which started out as protests by truckers angry with vaccine requirements when crossing the U.S.-Canadian border, have morphed into broader protests against COVID-19 health restrictions.

Police were out in force and put up barriers to limit vehicle access to the city center, as many thousands of protestors joined truckers already jamming Ottawa streets.

Similar protests were happening in almost every major Canadian city, including Toronto — where a man was charged with assault after throwing a smoke bomb into a crowd.

In Winnipeg, a driver was arrested for slamming his SUV into demonstrators, injuring four people.