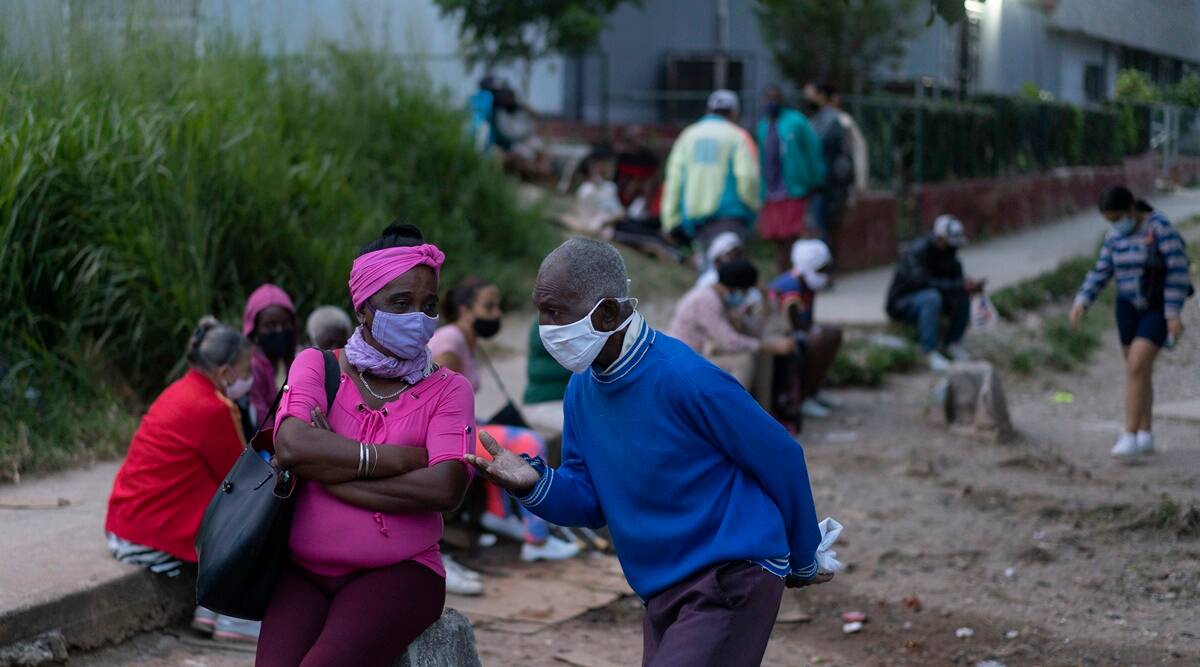 A young generation of dissidents, who rely on the internet to spread their ideas, are calling for a “Civic March for Change” on Monday, November 15, a bold move with little precedent in Cuba. The line starts during the day and stretches into the night. In the dark before dawn, there are hundreds of people waiting. Four women sleep on cardboard boxes, sharing a thin blanket. Others chat to stay awake. A nurse arrives after a 24-hour shift and takes her place.

They each hold a ticket to enter a Cuban government supermarket, which is the only place to find basics such as chicken, ground beef and toiletries. At 5:27 am Wednesday, a man in a fraying baseball cap hands out ticket No. 302.

“If you don’t get in line, you don’t buy anything,” said a 35-year-old cook who arrived at 6 pm the previous day and who did not want her name published for fear of retribution.

Even in a country long accustomed to shortages of everything from food to freedom, it has been a remarkably bleak year in Cuba, with Covid-19 restrictions making life under tough new US sanctions even harder.

Now a young generation of dissidents, many of them artists and intellectuals who rely on the internet to spread their ideas, are calling for a protest Monday, a bold move with little precedent in Cuba. They hope to reignite the marches that filled the streets this past summer to demand food, medicine and liberty — and to take on a government that for the first time is not made up of veterans of 1959’s communist revolution.

Just days before the “Civic March for Change” was set to begin, organizers appeared to be toning down the protests for fear of violence. Organizers have encouraged people to hang white sheets outside their homes, applaud at 3 pm and find other creative ways to demonstrate if they do not feel comfortable taking to the streets.

Despite Cuba’s one step forward, two steps back dance toward openness, experts agree that Cuba is on the cusp of something important, even if the movement behind the protests is unlikely to bring down a Communist Party that has been in power for more than 60 years.

“We are witnessing an unprecedented counterrevolutionary movement in Cuba,” said Carlos Alzugaray, a former Cuban ambassador to the European Union and an academic who considers himself a “critical” supporter of the government. It is a crucial moment for the Cuban government. A generation of young people who grew up under Fidel Castro and his brother Raúl are now facing Miguel Díaz-Canel, a longtime party stalwart who became president in 2018. At 61, he represents a younger generation of Cuba’s Communist Party and the person tasked with seeing it into the future.

Díaz-Canel blames Cuba’s economic ills on the long-standing US embargo, which has been ramped up in recent years. The Trump administration restricted travel to the island, cut off remittances and further locked the island out of the international financial system, pummeling its foreign exchange inflows.

He has proved himself just as willing as his predecessors to crack down on dissent. When protesters took to the streets July 11, Díaz-Canel encouraged party members to rush after them. Government supporters pursued the demonstrators with batons.

Some 1,000 people were arrested and 659 remain jailed, according to a count by Cubalex, a civil rights group.

After Monday’s planned demonstration was announced, the Cuban government launched a massive media campaign against it, insisting that its leaders are pawns of the United States.

Yunior García, a playwright, has emerged as one of the movement’s leaders. He was among the founders of Archipiélago, a Facebook group of about 35,000 members that promotes discussion and debate. The group is the main promoter of rallies scheduled to take place in cities around the country Monday.

“I believe that the role of art is to awaken,” he said. “We have to shake things up so that people with dignity that make up society decide to change things.”

The Cuban government has publicly criticized García, saying that workshops he attended abroad, such as one that was about how dissidents could forge alliances with the Cuban military, amounted to planning a popular uprising. García said he was doing research for a script.

García acknowledges meeting with US officials in Havana but said he went to record a podcast and discuss the effects of the trade embargo.

His internet and phone services are routinely cut, he said, and he recently found a decapitated chicken outside his front door, a religious hex, which he saw as a political threat. State security has even visited his mother-in-law three times at work, he added. “They have used every tool at their disposal to intimidate us,” García said.

García said Thursday that he would march alone, in silence, on Sunday. He also urged others to take whatever peaceful measures they could Monday to avoid provoking a reaction from police.

His announcement, posted on Facebook, left unclear whether the rallies would still take place. Raúl Prado, a cinematographer and one of the platform’s coordinators, said demonstrators would protest “to the extent that the circumstances allow.”

If no police car is parked outside his house preventing him from leaving Monday, he will march to insist on the liberation of political prisoners and to demand human rights, Prado said.

“There is no other way to achieve change,” he said. “If it’s not us, then the responsibility will fall on our children.”

At least two coordinators of Archipiélago have been fired from their state jobs because of their involvement with the group, which Díaz-Canel has denounced as a Trojan horse for US-backed regime change.

“Their embassy in Cuba has been taking an active role in efforts to subvert the internal order of our country,” Díaz-Canel said in a recent speech.

The US government spends $20 million a year on projects designed to promote democracy in Cuba — money the Cuban government sees as illegal attacks on its sovereignty.

But Archipiélago members interviewed by The New York Times denied receiving any money from the US government and emphasized that Cuban problems are for Cubans alone to solve.

“Archipiélago is not a movement, a political party or an opposition group,” Prado said. “It does not have a particular political line.”

The young and hip group of Cubans behind the Facebook group contrast with classic dissidents on the island, who were often older, unknown to most Cubans and deeply divided in factions. The arrival of the internet, which came to Cuban telephones three years ago after diplomatic deals cut with the Obama administration, was a game changer. With internet now widely available, ordinary citizens are abreast of anti-government activities and are quick to post their own complaints as well.

Hal Klepak, professor emeritus of history and strategy at the Royal Military College of Canada, said the scale of opposition the government has faced this year is unparalleled in Cuba’s history since the revolution.

“No one had ever imagined tens of thousands of people in the streets,” he said. “It is visible and by Cuban standards it is loud. It’s something we’ve never seen before.”

But the question remains whether ordinary Cubans will attend Monday’s protest, considering the government declared it illegal and its organizers have toned down their calls.

The protest was scheduled on the day that quarantine rules are being lifted, tourists are being welcomed back and children are set to return to school. The wave of Covid-19 fatalities that helped fuel the July protest has largely subsided, and 70% of the nation is now fully vaccinated.

Abraham Alfonso Moreno, a gym teacher who at 5 am held ticket No. 215 outside the government store, said he did not protest in July and would not Monday, either. “In the end, it’s not going to solve anything,” he said.

He was more fixated on finding allergy pills.

Marta María Ramírez, a feminist, pro-democracy and gay rights activist in Havana, said the people who rushed to protest in July were more concerned about food than democracy, but that could be changing.