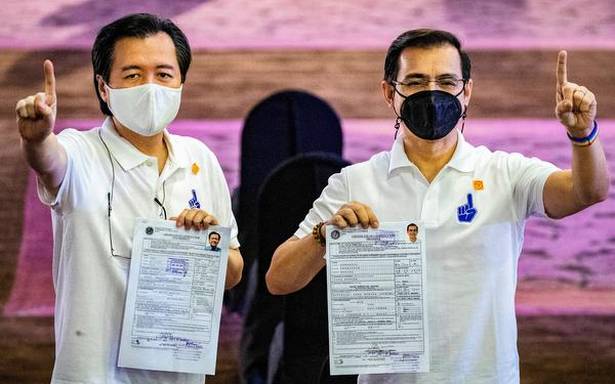 His running mate for the vice presidency — a separate contest — will be Dr. Willie Ong, a doctor followed on Facebook by 16 million users, who tap his free medical advice.

Manila City Mayor Francisco Domagoso registered to run for the presidency of the Philippines on October 4, touting himself as a unifying candidate of humble beginnings who can heal the economy and livelihoods damaged by the pandemic.

Mr. Domagoso (46) a former actor, is the second contestant to sign up for the May 2022 election to lead the Philippines for the next six years, after newly retired boxing icon Manny Pacquiao.

"We are too divisive and indecisive that caused the stunting of our economy on top of the pandemic," said Mr. Domagoso, known better for his celebrity screen name, Isko Moreno, after filing his candidacy.

"Let us heal our country and together there will be better future for each and every one of us."

Mr. Domagoso’s charisma and humble roots have made him popular in Manila, but experts say he could struggle to win over voters in southern provinces.

He earlier led a flag-raising ceremony at Manila city hall and offered a prayer at a church in a community where he grew up as a garbage collector from the city slums. Dozens greeted the mayor near the filing venue.

Mr. Domagoso was spotted by a talent scout while attending a funeral and became a matinee idol in a popular variety show before shifting to roles in more mainstream films.

He was elected as Manila’s Mayor in 2019. He ran unsuccessfully for Senator in 2016, after nine years as Manila’s Vice Mayor.

His running mate for the vice presidency — a separate contest — will be Willie Ong, a doctor followed on Facebook by 16 million users, who tap his free medical advice.

President Rodrigo Duterte at the weekend said he would retire and not contest the vice presidency as earlier agreed, but his daughter, Sara, would run for President.