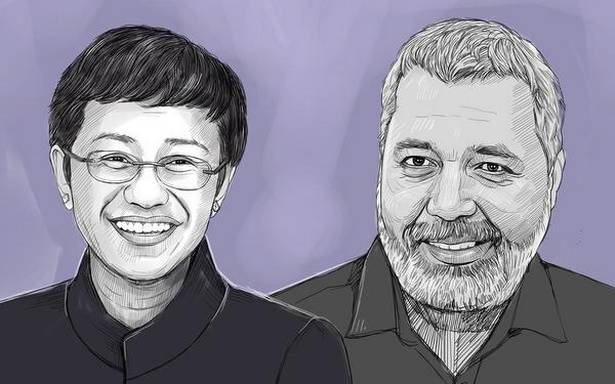 Journalists from the Philippines and Russia, whose works focused on exposing governments’ wrongdoing and corruption, have been awarded this year’s Nobel Peace Prize

Ms Ressa, aged 58, has had a long career in journalism which includes stints as the bureau chief of CNN in Manila and Jakarta, having made her mark as the network’s lead investigative reporter in Asia. In 2012, she co-founded Rappler, a digital media company focused on investigative journalism that began as a Facebook page called MovePH before becoming a complete website. Rappler made its mark focusing specifically on Philippines President Rodrigo Duterte’s controversial anti-drug campaign, featuring the deaths of thousands of suspected drug dealers and addicts in a series of articles called the “Impunity series” in 2016. The campaign has been widely discredited for targeting the poor in extrajudicial deaths and for the impunity afforded to law enforcement agencies in doing so.

Later, it focused on how social media and internet were being “weaponised” to spread fake news, troll and harass political opponents and to manipulate public discourse, chiefly by President Duterte’s campaign, in another series called the “Propaganda series”. This series of articles shed light on organised disinformation using the internet in the Philippines. As the Cambridge Analytica-Facebook scandal, or the Donald Trump presidency’s use of social media to weaponise disinformation, or organised disinformation on the internet by covert agencies from Russia, or the barrage of fake news using messenger services in India have shown, the era of the “infodemic” is well and truly upon the world. The Nobel Committee’s recognition of Ms. Ressa’s work is an acknowledgement of the severity of this problem.

Beyond work on the drug campaign and disinformation, Rappler also exposed government corruption and shed light on the financial holdings of political leaders and their possible conflicts of interest. Rappler also became a member of the Poynter Institute’s International Fact-Checking Network (IFCN). Rappler’s investigative work also earned it the government’s ire. In 2017, President Duterte called the outlet by name and falsely stated that it was a “foreign-owned” firm in his state-of-the-union address. The country’s Securities and Exchange Commission looked into the company’s ownership structure and revoked its licence even as Ms. Ressa herself was charged with tax evasion in December 2018. She denied the charges and the case was in suspension.

Later, the country’s National Bureau of Investigation filed a “cyber libel” case against Ms. Ressa and a writer for the website and found them guilty with a prison sentence up to six years, but were allowed to post bail pending an appeal. The case, regarded as a blow to press freedom in the Philippines, pertained to an article by a researcher with Rappler, Reynaldo Santos Jr. citing an intelligence report that spoke of a business executive being linked to drug smuggling and trafficking. That the case was made against Ms. Ressa, who was not involved in day-to-day editorial operations at Rappler, raised questions if the Bureau was specifically targeting her even as the media fraternity claimed that the case had a chilling effect on investigative journalism in the country.

Ms. Ressa welcomed the news of the award saying, “This is not about us [Rappler]. This is about you. Because freedom of the press is the foundation of every single right you have as a Filipino citizen”.

Dmitry Muratov, aged 59 and the co-winner of the Prize, is the editor of the Novaya Gazeta newspaper in Russia. The Committee mentions that Mr. Muratov “has for decades defended freedom of speech in Russia under increasingly challenging conditions”. Mr. Muratov began his career as a correspondent for the Volzhsky Komsomolets newspaper and later edited news articles at Komsomolskaya Pravda before he and scores of colleagues from the paper left to start their own publication, Novaya Gazeta, with an aim to run “an honest, independent, and rich” source of news for Russian citizens.

In 1993, former Soviet Union president Mikhail Gorbachev donated a portion of his Nobel Peace Prize money to the newly set-up newspaper, helping it buy computers for operations. Remarkably, nearly 30 years after being helped to set up by the architect of the ‘glasnost’ (openness and transparency) reforms in the erstwhile Soviet Union, the paper’s editor has won the same prize.

Mr. Muratov has been the editor-in-chief for more than two decades and the Committee recognises that Novaya Gazeta is “the most independent newspaper in Russia, today, with a fundamentally critical attitude towards power” and that the “newspaper’s fact-based journalism and professional integrity have made it an important source of information on censurable aspects of Russian society rarely mentioned by other media.” The newspaper also uniquely elects its editors since 2009 who go on to serve two-year terms.

The newspaper, the Committee records, “has published critical articles on subjects ranging from corruption, police violence, unlawful arrests, electoral fraud and “troll factories” to the use of Russian military forces both within and outside Russia” and is best known for its investigative stories on the war in Chechnya and the wealthy oligarchs in post-Soviet Russia. The publication has suffered for its boldness; six of its journalists have been killed. The most well-known among them was Anna Politkovskaja, who wrote several telling pieces on the conduct of the war in Chechnya. It is still not known who ordered contract killers to take the life of Ms. Politkovskaja, who was shot dead outside her apartment in 2006.

Other hard-hitting stories carried by the newspaper included those on the repression of homosexuals in Chechnya in 2017. The newspaper has been credited with pioneering investigative reporting against the Russian elite with other online publications taking cue from it despite threats to the free press in the country.

Mr. Muratov, in his reaction to the award, claimed that he expected it to be given to Russian political dissident and opposition leader Alexei A. Navalny, who survived a poison attack last year and is currently in jail. Even as the Russian government praised the Committee’s awarding the Peace prize to Mr. Muratov, several leading Russian-language news outlets have been recently subject to a crackdown, being termed “foreign agents” and investigative journalists have been forced into exile.

Russia ranks 150 among 180 countries in the latest World Press Freedom Index, released annually by the Reporters sans Frontiers (Philippines is ranked a lowly 138 and India slipped to 142 in the rankings too).

The Committee strongly argued the case for the Prize, by saying that “freedom of expression and freedom of information help to ensure an informed public. These rights are crucial prerequisites for democracy and protect against war and conflict. The award of the Nobel Peace Prize to Maria Ressa and Dmitry Muratov is intended to underscore the importance of protecting and defending these fundamental rights.”