On Friday, a local lawyer shared a Facebook post saying that school district buses were transferring migrants to processing facilities. The post was shared at least 1,400 times and got over 300 comments, many from locals who said they were worried about diseases.

Many residents of the Texan border town of Del Rio have been saying for months that they feel abandoned by the federal government as border arrests hit 20-year highs.

Now, with some 16,000 migrants sheltering in precarious conditions under the International Bridge connecting Del Rio and Mexico’s Ciudad Acuña, the resentment is getting worse.

“THE SAME BUSES OUR CHILDREN WILL RIDE ON MONDAY!!!!” Jacques De La Mota wrote alongside pictures of a yellow school bus seemingly picking up migrants in the dark.

De La Mota’s post was shared at least 1,400 times and received more than 300 comments, many from local residents who said they were worried about diseases. But some called out what they said was barely-veiled racism. “This post is giving me segregation vibes,” read one comment.

The local school district superintendent issued a statement explaining that only two buses, neither currently in use to transport students, had been deployed.

De La Mota told Reuters he was simply concerned about health and angry that the district was enlisted to help solve a federal problem.

The uproar over school buses is just one example of discontent over immigration in this town of 35,000, where some 85% of the community is Hispanic and the nearby Laughlin Air Force Base is a big employer.

Many residents are also furious over the closure of the International Bridge, ordered on Friday due to the crowds of migrants, that is inflicting economic pain on both sides of the border. 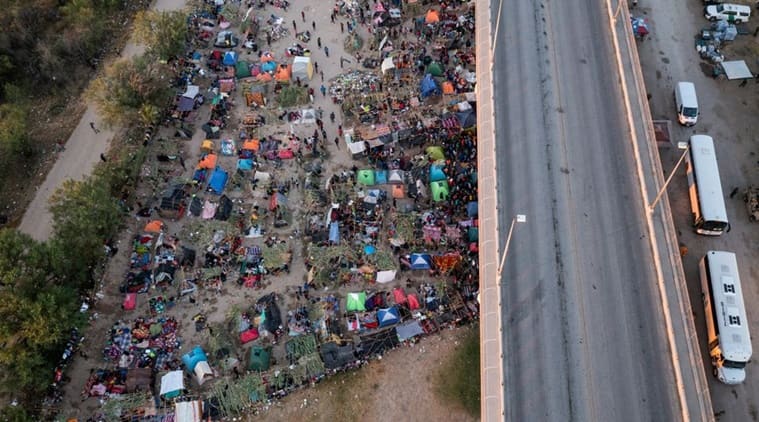 A small group protested on Saturday, with one woman waving a sign that said “BIDEN BORDER CRISIS.” A Reuters journalist saw a black pick-up truck cruising around town with a “FUCK BIDEN” flag. Another driver, going over the bridge when it was still open last week, looked down at the huddled migrants and grumbled that Del Rio residents might as well move over to Mexico.

Biden on back foot

Val Verde County, whose county seat is Del Rio, went for Donald Trump over Joe Biden by a ten-point margin in the 2020 election, with some approving of his hard-line immigration policies. Del Rio’s mayor Bruno Lozano has made no qualms about calling out his fellow Democrat president.

“Where is your plan to protect American communities at the southern border?” Lozano tweeted on Saturday. “I spoke to Governor Abbott today. We have developed a temporary plan, we’d like to see yours.”

Arguing that Biden’s promise of a more “humane” approach to migration has galvanized crossings, Greg Abbott, a Republican, has cracked down.

Among his measures: Apprehending migrants for allegedly trespassing on private property and preparing to build some of the border wall Trump promised, whose construction Biden paused.

Abbott, who faces a gubernatorial primary in March, has been criticized for his response to a devastating February storm and his handling of the COVID-19 pandemic. The border issue could be a boon for him and Republicans more broadly, said James Henson, director of The Texas Politics Project at The University of Texas at Austin.

“It’s a good issue for Republicans as it taps into a growing nativist sentiment in the Texas GOP,” said Henson.

De La Mota, himself the descendant of Mexicans who immigrated several generations ago, is a registered Democrat who said the border crisis means Biden can no longer automatically count on his vote. “It causes me to reconsider what I would do in the next cycle,” he said.

School Board member Joshua D. Overfelt, who wrote in a statement that he opposed the request for buses because there was no guarantee migrants were not carrying “multiple diseases,” said that while he felt sorry for the asylum-seekers, he had to balance that with residents’ feelings of being overrun.

He recalled his father’s fright in May when he walked into his barn towards his tractor and discovered 13 Mexican migrants hiding there.

“The community is just caught in between,” he told Reuters.

To be sure, there are also residents in Del Rio mobilizing to help migrants.

Some 35 locals volunteer at Del Rio’s sole facility to care for migrants, said Tiffany Burrow, the director of operations. Burrow said there are “misconceptions” in the community about their work, including false assumptions that the organization pays for migrants’ travels onwards in the United States.

“We don’t focus so much on the political aspect but rather the idea of helping our neighbor,” said Burrow. “When you’re doing it from that motive, it’s not as controversial.”