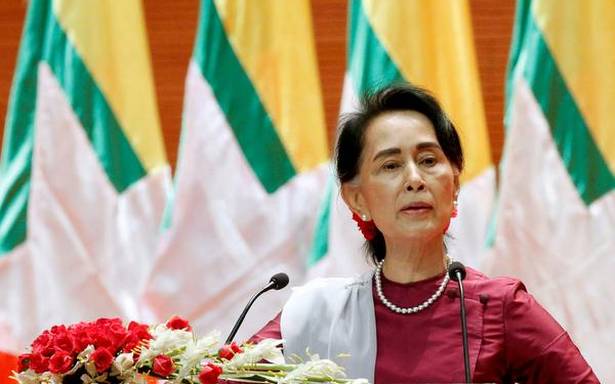 Myanmar has been in the grip of an armed resistance after security forces used lethal force to put down widespread nonviolent demonstrations.

Police in Myanmar have filed an 11th corruption charge against Aung San Suu Kyi, the country’s elected leader who was ousted from power by a military takeover a year ago, state-controlled media reported Friday.

The Global New Light of Myanmar newspaper reported that Suu Kyi was being charged under the Anti-Corruption Law covering bribery, which carries a maximum prison term of 15 years.

Suu Kyi has faced a raft of charges since she was taken into custody when the military seized power on Feb. 1 last year. Her supporters and human rights groups say the cases against her are baseless, and have been contrived to bar her return to politics and participation in a new election the army has promised by 2023.

Suu Kyi has already been sentenced to six years’ imprisonment after being convicted of illegally importing and possessing walkie-talkies and violating coronavirus restrictions.

She is also being tried on the charge of violating the Official Secrets Act, which carries a maximum sentence of 14 years. Australian economist Sean Turnell, who was her advisor, is a co-defendant.

A court session in the capital Naypyitaw in the secrets case was postponed Thursday because the 76-year-old Suu Kyi was suffering from low blood pressure, causing dizziness, said a person familiar with the proceedings, speaking on condition of anonymity because the hearings are closed.

But she was back in court Friday when hearings began on five corruption charges related to granting permission to rent and buy a helicopter.

Her health elicited a statement of concern from the group ASEAN Parliamentarians for Human Rights.

“It’s a matter of international concern that Aung San Suu Kyi is reportedly too ill to attend her court hearing, the second time this has happened,” said a statement from it’s chairperson, Malaysian lawmaker Charles Santiago.

“She has been imprisoned without just cause for more than a year now, with access to her heavily restricted, apart from her lawyers who are reportedly banned from speaking to the media, raising serious concerns regarding her access to adequate medical care.”

Santiago said the situation made it urgent that Cambodian Foreign Minister Prak Sokhonn, the special envoy to Myanmar appointed by the Association of Southeast Asian Nations, make arrangements to visit her. Myanmar’s military government has so far barred anyone from visiting her.

Friday’s report in the Global New Light of Myanmar and on MRTV state television alleged that in her position as state counsellor — the de facto head of state — Suu Kyi received $550,000 in four installments in 2019 and 2020 “to facilitate the business activities of a private entrepreneur.”

The story did not identify who gave her the money, but described it as a donation directed to a social welfare foundation named after Suu Kyi’s mother.

The other corruption cases against Suu Kyi involve charges related to the purchase and rental of a helicopter and acceptance of another bribe. They also alleged she diverted money meant as charitable donations to build a residence, and misused her position to obtain rental properties at lower-than-market prices for the foundation named after her mother. The Anti-Corruption Commission has declared such actions deprived the state of revenue it would otherwise have earned.

Suu Kyi’s trial for election fraud is set to begin on Feb. 14. The military said it seized power because there was widespread voter fraud in the 2020 general election, an allegation not corroborated by independent election observers.

Myanmar has been in the grip of an armed resistance after security forces used lethal force to put down widespread nonviolent demonstrations. Some 1,500 civilians have died but the government has been unable to suppress an insurgency that is active in both urban and rural areas.