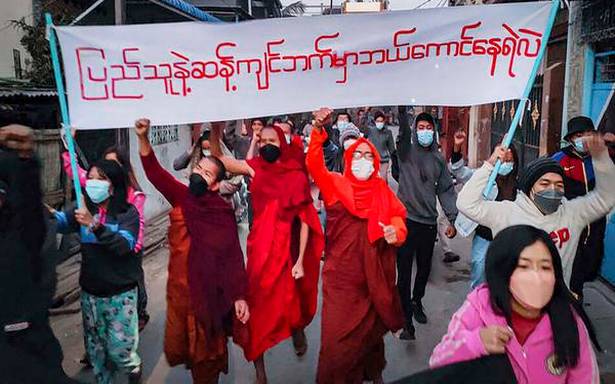 Anti-coup protesters across Myanmar defied a junta order not to mark the first anniversary of the military’s power-grab with a silent strike and clapping protests on Tuesday.

Struggling to contain the backlash and contending with daily clashes, the junta has killed more than 1,500 civilians, according to a local monitoring group. Swathes of the country are under the control of anti-coup fighters.

Residents across commercial hub Yangon and in the second city of Mandalay clapped en masse at 4 p.m. (1500 IST), AFP correspondents and locals said, marking the end of a “silent strike” against the coup.

“We were clapping,” one Mandalay resident said. “Other houses in my neighbourhood clapped as well.”

The junta had ordered shops to stay open on Tuesday but the streets of Yangon began emptying at 10 a.m., a scene that was repeated in Mandalay and the southern Tanintharyi region.

“No one is going out on the streets around my area and security forces are patrolling,” the resident said.

“I’m staying at home playing online games to participate in the silent strike.”

A similar shutdown in December emptied the streets of cities and towns across the country.

Ten people were arrested for taking part in the clapping protest in Yangon, local media reported.

“If the strike is shaping up as is reported, it is a thunderous silence, a resounding rebuke of military rule,” David Mathieson, an analyst formerly based in Myanmar, told AFP.

Ahead of the anniversary, the junta had threatened to seize businesses that shutter and warned that noisy rallies or sharing anti-military “propaganda” could lead to treason or terrorism charges.

Photos released by the junta’s information team on Tuesday painted a picture of normalcy in the country, including competitors finishing a marathon in the southern Bago region and a religious celebration.

Undated video handouts showed pro-military demonstrations in unspecified parts of the country, some holding national flags and chanting slogans in support of the army.

Others held banners denouncing the “People’s Defence Forces” that have sprung up to fight the military and dealt painful blows to junta troops with guerilla ambushes and mine attacks.

A bomb attack on a pro-military rally in the town of Tachilek caused several casualties, local media reports said, without giving exact figures.

AFP was unable to verify the reports.

The United States, Britain and Canada unveiled coordinated sanctions on Myanmar officials Monday, including those involved in the trial of ousted leader Suu Kyi.

Citing “unspeakable violence against civilians”, the undermining of regional stability and “rampant” corruption, US President Joe Biden said he was working with allies to “hold accountable” those responsible.

But the United Nations Special Rapporteur on Myanmar said the international community needed to do more.

“The fact that one year has elapsed with no Security Council Resolution imposing a comprehensive arms embargo — as arms continue to flow to the junta and kill innocent people — is unacceptable,” said Tom Andrews.

“The people of Myanmar deserve better from the United Nations.”

Another trial for Suu Kyi

Suu Kyi has been detained since the coup, and faces a raft of charges from election fraud to breaching the official secrets act, and faces over 100 years in jail.

The day before the anniversary the junta announced the Nobel laureate will face a new trial for electoral fraud during 2020 polls in which her National League for Democracy party trounced a military-backed rival.

Several senior members of the national electoral commission have also been arrested since the coup, accused of masterminding the NLD’s landslide victory.

The junta cancelled the results of the 2020 election in July last year, saying it had found some 11.3 million instances of fraud.

Independent monitors said the polls were largely free and fair.