Bangladesh's leader has begun a sweeping anti-corruption campaign she says will spare no one, be they political friend or foe, and has already swept up several ruling party members. 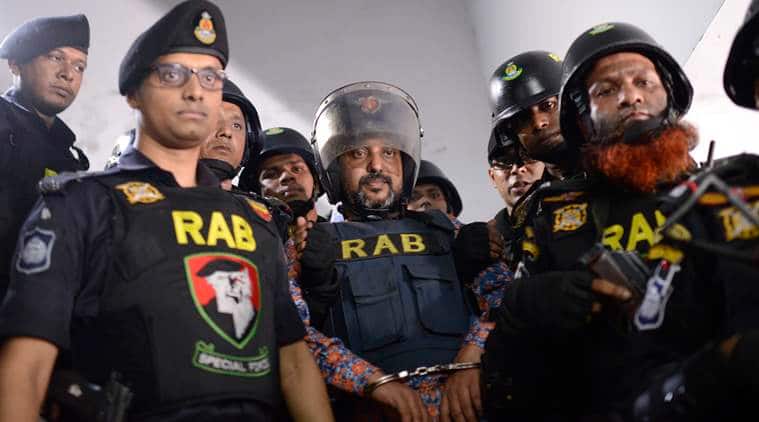 As gamblers called out bets around craps and roulette tables at a sports club in Bangladesh’s capital, dozens of black-clad security forces burst inside.

By the end of the raid, more than 140 people had been taken out of the makeshift casino in handcuffs.

At the same time in another part of Dhaka, commandos were raiding the home of the suspected casino organizer, Khaled Mahmud Bhuiyan, an influential member of Prime Minister Sheikh Hasina’s party. They say they discovered stashes of liquor, cash and illegal arms.

The raids are part of a sweeping anti-corruption campaign Hasina has launched in this Muslim nation where gambling is illegal, alcohol consumption requires a permit and where paying bribes is common not just for lawbreakers but for those seeking normal government services.

Emboldened by December’s landslide election victory for her ruling Awami League party, Hasina has declared stamping out corruption as her government’s priority and promised even political allies won’t be spared.

“This is an acknowledgement that corruption, extortion and unlawful activities have permeated the ruling party to the grassroots,” said Ali Riaz, a professor of political science at Illinois State University and expert on Bangladeshi politics.

It remains to be seen how high up the campaign will be allowed to reach, Riaz said.

“Casinos and the unbridled power of the party leaders are just the tip of the iceberg of the corruption and absence of any accountability in the country,” he said.

So far the campaign, which was launched in September, has netted several ruling party members charged with running illegal casinos, money laundering and possessing illegal arms. Security forces have recovered millions of dollars’ worth of cash, and stockpiles of weapons and gold. More than 600 bank accounts have been frozen.

Hasina has been able to attempt such a crackdown because she wields immense power after 10 years at the helm of government.

She’s firmly in charge of her own party and faces no effective opposition in Parliament, with her party having 301 seats in the 350-seat Parliament. Her archrival, former Prime Minister Khaleda Zia, is serving 17 years in jail for corruption.

That dominance could be exacerbating the corruption problem. While Bangladesh has a long history of ruling party members manipulating business and government contracts in their favour, experts say the total absence of political opposition has engendered a sense of impunity among some in power. “Investment and politics become synonymous in Bangladesh,” said Ifekhar Zaman, executive director of the Bangladesh chapter of Transparency International. “A collusion of politics, business, and bureaucracy and law enforcement” has created an “infrastructure” of corruption.

When she launched the campaign, Hasina seemed to acknowledge that if corruption were allowed to spiral, it could set the stage for a repeat of events of January 2007, when a military-backed caretaker government took control of the country. The events are known locally as 1/11, for the date they began.

“We’re taking measures in advance so that no 1/11-like incident can happen again in the country,” Hasina said in September. “The purge must begin from my own house.”

One of the people recently arrested, G.K. Shamim, a construction company owner who has ties to the ruling party, is accused by investigators of corruption on government projects, including building the headquarters of the Rapid Action Battalion, the same security force conducting the anti-corruption raids.

A government anti-corruption commission is now investigating more than 20 people in Hasina’s inner circle for possible involvement with illegal casinos, money laundering and other financial crimes, including Omar Faruque Chowdhury, who heads the ruling party’s influential youth wing and is Hasina’s cousin’s husband. In a meeting led by Hasina, Chowdhury was stripped of his post while a criminal investigation continues.

Bhuiyan, who is accused of running the casino, Shamim and Chowdhury have all maintained their innocence in court.

Hasina’s office declined requests to interview the prime minister about the crackdown, and her press secretary, Ihsanul Karim, gave only a one-sentence comment when asked about the campaign.

“Prime Minister Sheikh Hasina is determined to continue the crackdown and no wrongdoers will be spared,” Karim said.

Some analysts see the campaign as a response to increasingly brazen corruption that could threaten Hasina’s ambitious development agenda.

Bangladesh’s economy has averaged more than 6% annual growth since Hasina came to power in 2009, largely fueled by its garment-exports business, the second largest in the world. That growth has lifted millions out of poverty, helping Bangladesh surpass wealthier neighbors like India on some human development measures such as life expectancy and reproductive health.

But anti-corruption campaigners say corruption has cost the country 2-3% annual growth. Hasina herself has blamed corrupt “termites” for eating into her government’s development budget.

So far the punishment for those convicted in the crackdown has been fairly light. Another ruling party member accused of running a Dhaka casino empire and found with illegal drugs and liquor among other contraband, Ismail Hossain Chowdhury Samrat, was expelled from the party and sentenced to six months in jail. For the crime of money laundering alone, he could have faced up to 12 years in prison.

The anti-corruption campaign has proven popular with the public, and so far has proven risk-free for Hasina.

“As of now, I think it’s a low-risk campaign,” Riaz said. “The campaign hasn’t touched central leaders, any bureaucrats or legitimate businessmen. The risk, if any, is of image of the party.”