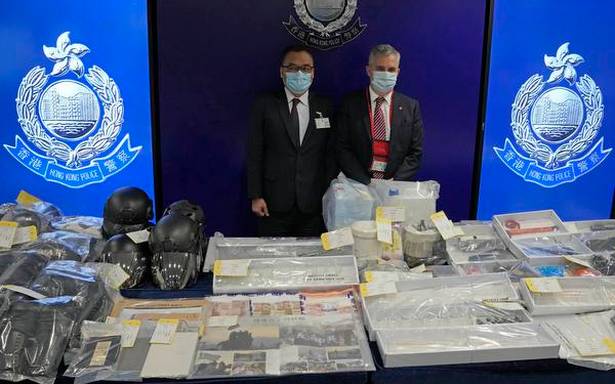 Police accused the group of planning to use the explosive to bomb courts, cross-harbor tunnels, railways and trash cans on the street “to maximise damage caused to the society.”

Nine people, including six secondary school students, were arrested in Hong Kong on Tuesday for allegedly plotting to set off homemade bombs in courts, tunnels and trash cans as political tensions rise in the city where China is tightening its grip.

Police said they were detained on suspicion of engaging in terrorist activity under a harsh national security law that Beijing imposed a year ago as part of a crackdown on dissent in the former British colony that has long enjoyed freedoms not seen on the Chinese mainland.

Hong Kong authorities have used the law, enacted in response to anti-government protests that rocked the city in 2019, to arrest many of the city’s prominent activists. Others have fled abroad as a result.

If the allegations are true, the group appears to represent a more radical fringe of the protest movement, which has demanded broader democratic freedoms for Hong Kong just as its liberties are under threat. Police said the group was attempting to make the explosive triacetone triperoxide, or TATP, which has been widely used in bombings in Europe and elsewhere, in a makeshift laboratory in a hostel.

Police accused the group of planning to use the explosive to bomb courts, cross-harbor tunnels, railways and trash cans on the street “to maximise damage caused to the society.” Since the 2019 anti-government protests, Hong Kong police have arrested several people over alleged bomb plots and for making TATP, including 17 detained that year in overnight raids that also seized explosives and chemicals.

Nine people between 15 and 39 years old were arrested on Tuesday, according to Senior Superintendent Li Kwai-wah of the Hong Kong Police National Security Department.

Hong Kong chief executive Carrie Lam said at a weekly news briefing that she hopes the members of the public will “openly condemn threats of violence.” “They should not be wrongly influenced by the idea that … breaking the law is in order, if you’re trying to achieve a certain cause,” she said.

“They should not be influenced into thinking that they can find excuses to inflict violence.” Authorities said they seized equipment and raw materials used to make the TATP, as well as a “trace amount” of the explosive. They said they also found operating manuals and about 80,000 Hong Kong dollars ($10,300) in cash.

Police froze about 6,00,000 Hong Kong dollars ($77,200) in assets that they say may be linked to the plot. Authorities said all nine planned to set off the bombs and then leave Hong Kong for good.

The arrests come as China is increasing its control over Hong Kong, despite a promise to protect the city’s civil liberties for 50 years after the city’s 1997 handover from Britain.

In the most glaring example of that campaign, police arrested at least seven top editors, executives and journalists of the Apple Daily newspaper, which was an outspoken pro-democracy voice, and froze its assets, forcing it to close two weeks ago.

Also Tuesday, Ms. Lam also said that an envelope of “white powder” had been sent to her office. Police said the substance was still being analysed but that they did not believe it to be dangerous.