Venezuela’s devastating six-year economic crisis is hollowing out the school system — once the pride of the oil-rich nation and, for decades, an engine that made the country one of the most upwardly mobile in the region. 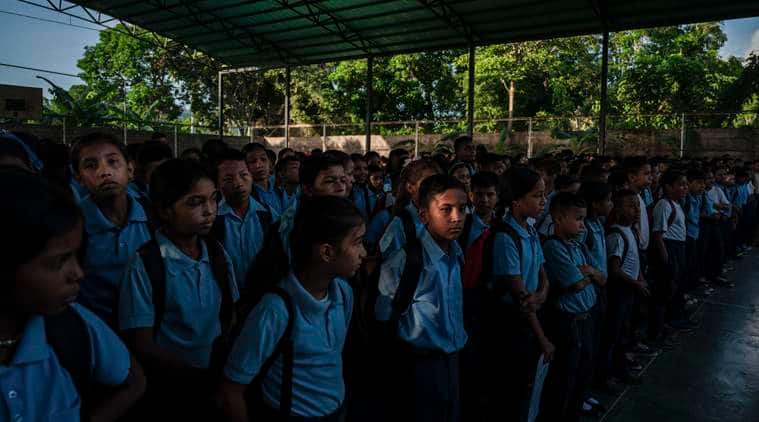 Hundreds of children filed into their school courtyard to hear a local Catholic bishop lead prayers for their education.

“We pray for the youths who are on the streets and can’t come to school,” said Bishop Jorge Quintero, addressing the Augusto D’Aubeterre Lyceum school in the beach town of Boca de Uchire on a steamy morning in October. “There are a lot of them.”

By the end of the 15-minute ceremony, five children had fainted and two of them were whisked away in an ambulance.

The faintings at the primary school have become a regular occurrence because so many students come to class without eating breakfast, or dinner the night before. In other schools, children want to know if there is any food before they decide whether to go at all.

Venezuela’s devastating six-year economic crisis is hollowing out the school system — once the pride of the oil-rich nation and, for decades, an engine that made the country one of the most upwardly mobile in the region. These schools in the past provided children even in remote areas with a solid shot at the country’s best universities, which in turn opened doors to top U.S. schools and a place among Venezuela’s elite. 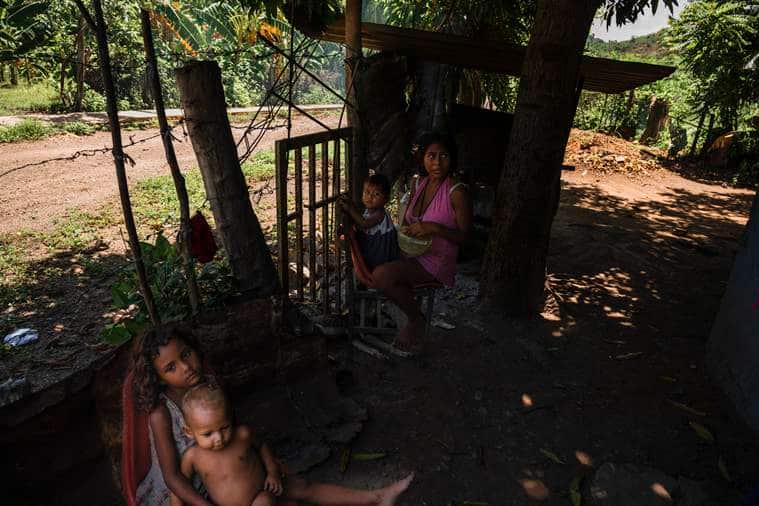 Hunger is just one of the many problems chipping away at them now. Millions of Venezuelans have fled the country in recent years, depleting the ranks of students and teachers alike. Many of the educators who remain have been driven from the profession, their wages made nearly worthless by years of relentless hyperinflation. In some places, barely 100 students show up at schools that once taught thousands.

The collapse of the education system in Venezuela is not only condemning an entire generation to poverty, but risks setting the country’s development back decades and severely stunting its growth potential, experts and teachers say.

“An entire generation is being left behind,” said Luis Bravo, an education researcher at the Central University of Venezuela in Caracas. “Today’s education system doesn’t allow children to become meaningful members of society.”

The government stopped publishing education statistics in 2014. But visits to more than a dozen schools in five Venezuelan states and interviews with dozens of teachers and parents indicate that attendance has plummeted this year.

Many schools are shuttering in the once-wealthy nation as malnourished children and teachers who earn almost nothing abandon classrooms to scratch out a living on the streets or flee abroad. It is a major embarrassment for the self-proclaimed socialist government, which has long preached social inclusion. The situation is in sharp contrast to countries that Venezuelan leaders have held up as role models — Cuba and Russia — both of which have managed to shelter the primary education system from the worst effects of a comparable downturn in the 1990s.

Students began skipping school in Venezuela shortly after President Nicolas Maduro came to power in 2013. A fall in the price of the country’s main export, crude oil, combined with Maduro’s ill-timed effort to double down on price and currency controls sent the economy into a recession from which it has not yet emerged.

Some Venezuelan children are staying home because many schools have stopped providing meals or because their parents can no longer afford uniforms, school utensils or bus fares. Others have joined parents in one of the world’s biggest displacement crises: About 4 million Venezuelans have fled the country since 2015, according to the United Nations.

Thousands of the country’s 550,000 teachers did not show up for classes when schools reopened in September, according to the national teachers union, ditching their $8-a-month wages to try their luck abroad or in Venezuela’s booming illegal gold mines. 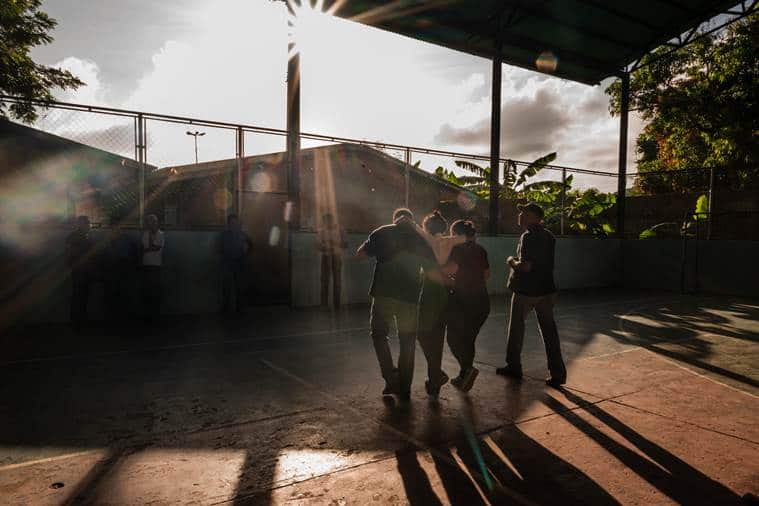 In Venezuela’s most-populous state, Zulia, up to 60% of about 65,000 teachers have deserted in recent years, according to estimates by Alexander Castro, head of the local teachers union.

“They tell us that they prefer painting nails for a few dollars than work for a minimum wage,” Castro said.

To keep schools going, the remaining teachers often teach all of the subjects or combine different school years in one classroom. Nearly all of the one dozen schools visited have slashed working hours; some open for only a day or two a week.

In the village of Parmana in Venezuela’s central plains, only 4 out of 150 registered students attended school in October. The four students, of varying ages, sat in the same dilapidated classroom without electricity, practicing everything from the alphabet to algebra as the school’s sole remaining teacher tried to encourage them with a dejected smile.

The rest of the village’s children have joined their parents in the fields and fishing boats to help feed their families.

In the country’s second biggest city of Maracaibo, a sign outside a dilapidated school without electricity recently read: “Please come to classes, even without uniforms.” The children ask teachers at the entrance if there is food before deciding whether to come in.

Maracaibo’s biggest school no longer has any functioning bathrooms. It was designed for 3,000 students; only 100 show up.

Half of the teachers didn’t return to work after the summer holidays to a school in the town of Santa Barbara outside the capital of Caracas, forcing the principal to enlist parent volunteers to keep the classes going.

On the other side of the capital, in the town of Rio Chico, most of the rooms in a local school are boarded up for lack of students and teachers. When the remaining pupils arrive, they first ask the whereabouts of the school’s cook, the teachers said.

Maduro’s mentor and predecessor, Hugo Chávez, made the expansion of public education one of the pillars of his popular “21st Century Socialism” campaign.

For a decade until 2013, the country made steady improvements in school enrollment thanks to generous school meals and handouts of food, utensils and cash to parents and children. Chavez built hundreds of new schools.

Chavez’s populist policies, however, had focused more on the quantity of students in school rather than the quality of the education. Then, as the country’s coffers ran dry, his government’s educational progress unraveled.

As attendance collapsed, Maduro continued to claim his government was focused on education spending despite the “brutal economic war” waged by his enemies.

“In Venezuela, not one school has closed or will ever close, not one classroom,” the president said in a televised address in April. “We will never deny access to education.”

To boost the ranks of teachers, Maduro in August promised to send thousands of the ruling party’s youth members to the classrooms. Education experts say few of these untrained activists will add any pedagogical value or even make it to schools.

At the same time, Venezuela’s pool of real teachers is drying up. The number of graduates at Venezuela’s main teacher training center, the Libertador Experimental Pedagogical University, fell 70% from 2014 to 2018.

Venezuelan teachers have been among the worst affected by the country’s economic collapse, as gross domestic product shrank by two thirds since 2013 and minimum wages fell to $8 a month.

Maduro’s de facto dollarization of the economy this year allowed many public employees in Venezuela to supplement their official salaries in nearly worthless local currency by charging in dollars for their services.

His backdoor liberalization of Venezuela’s controlled economy, however, brought little benefit to teachers in poor communities, where pupils’ families have little access to foreign currency.

In Boca de Uchire, the Caruto family has stopped sending its nine children to a nearby school when the cafeteria doesn’t open.

His sister, Yuxi Caruto, 17, was the last in the family to drop out from school, discouraged by the unaffordable bus fare. She tried taking up studies again at a local community center, but its teachers stopped showing up after two weeks of classes.

She now spends her time taking care of her 1-year-old son.

“I want to learn to do the math and read and write rapidly. I’m scared that when my son grows and starts asking questions, I won’t know how to respond. But right now, we don’t even have enough to eat.”