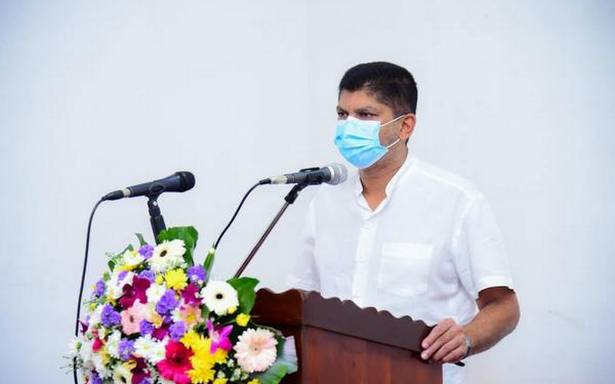 As many as eight Tamil prisoners in Sri Lanka’s Anuradhapura prison on Thursday petitioned the country’s Supreme Court, seeking relief after a ‘gun-wielding’ Prisons Minister allegedly threatened them a fortnight ago.

The prisoners stated that they fear for their lives, asking to be transferred to a prison in the Tamil-majority Northern Province. Jaffna parliamentarian and senior lawyer M.A. Sumanthiran will appear for them in the case, media reports said.

On September 15, Lohan Ratwatte, who was State Minister of Prison Management and Prisoners’ Rehabilitation, stepped down from the portfolio amid enormous pressure, after allegations of his asking Tamil prisoners to kneel, threatening them at gunpoint, surfaced. Mr. Ratwatte is still a junior Minister in the Rajapaksa administration, overseeing the Gem and Jewellery portfolio, although government critics have demanded that he be sacked from all positions, citing the reported incident that sparked much public outrage.

In their petition, the prisoners accused that the Minister asked the detainees to stand in a semi-circle and “ordered them to kneel before him”. “He then started to abuse them in Sinhala saying that His Excellency the President had given him all the power in relation to PTA prisoners and that he could either release them or shoot them dead. He had a pistol in his hand and appeared to be intoxicated,” the petition stated. The Minister’s office earlier denied any wrongdoing on his part.

The eight Tamil men — who have sought relief from the Supreme Court through Colombo-based lawyer Moahan Balendra — are in the remand following their arrest under Sri Lanka’s infamous Prevention of Terrorism Act (PTA).

Rights activists and Tamil political leaders have for long demanded repeal of the PTA, pointing to different governments’ tendency to use the law to target dissidents or arbitrarily detain “terrorism suspects” for long periods without trial.

Soon after the violent incident in the prison complex — allegedly involving the Prisons Minister — was reported in the media, the country’s Human Rights Commission started a suo motu investigation. International human rights watchdogs were swift to condemn the Minister’s actions. Human Rights Watch said the incident reflected “the disregard for human rights that prevails under the administration of President Gotabaya Rajapaksa, and in particular the vulnerable position of people held under the PTA.”