Over the last two days, the Thai police have used violence to suppress demonstrators, as the government intensified its crackdown on the youth-led pro-democracy movement. 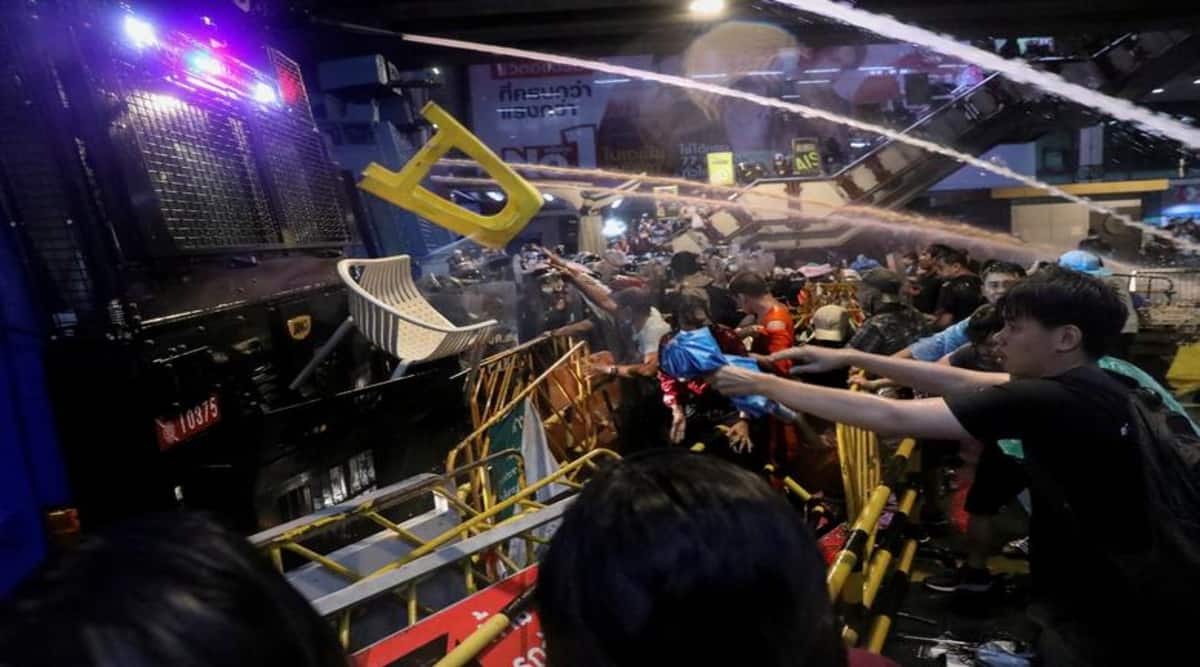 Despite a brutal crackdown by law enforcement authorities on Friday, Thai pro-democracy protestors have said they will hold another demonstration in Bangkok on Saturday.

“We condemn any violence against the people,” the People’s movement said in an official statement, according to Reuters. “We will continue to protest on Oct. 17,” it added, urging people to be prepared for another night of suppression tactics by the police.

Thousands of pro-democracy protestors stormed the streets of Bangkok and clashed with riot gear-clad police officials on Friday, defying an emergency government decree banning demonstrations and large gatherings for the second consecutive night.

The police fired blasts of a ‘stinging liquid’ from water cannons to disperse the demonstrators, many of whom were school students, according to a report by The Guardian. The protestors shielded themselves with umbrellas as they pushed back against the helmeted police officials, who were armed with batons and riot shields.

Many of the demonstrators, including teenage students in school uniforms, were seen running to nearby universities for safety as the police continued to advance towards them.

Demonstrators claimed the water being fired from the cannons contained chemical irritants. However, police spokesperson Kissana Phathanacharoen defended the use of water cannons as proportionate, adding the chemicals in the water were not dangerous.

“The police abided by international standards to disperse the demonstration,” Phathanacharoen was quoted as saying by Reuters.

The demonstrations first began in July, when around 3,000 young people — led by the student coalition group Free Youth — assembled at Bangkok’s historic Democracy Monument to protest against the monarchy and the country’s Thai Army-backed prime minister Prayuth Chan-ocha.

The country’s Prime Minister, however, has refused to resign, stating that he had done nothing wrong. In a press conference Friday, he said his government hoped to revoke the state of emergency before its normal 30-day duration “if the situation improves quickly”, DW reported.

Pre-recorded comments from King Vajiralongkorn were broadcast across the country on Friday, however he is yet to publicly acknowledge the ongoing protests. Addressing a group of former communists yesterday, he said, “the country needs people who love the country and love the monarchy.”

“The dictatorial government is using violence to disperse the people’s movement,” one of the protest’s leaders Tattep Ruangprapaikitseree told Reuters on Friday, hours before he was arrested along with six other people.

Over the last two days, the Thai police have resorted to using violence to suppress demonstrators for the first time since the protests began earlier this year, as the government intensifies its crackdown on the youth-led pro-democracy and anti-monarchy movement. Around 50 protestors, including a number of leaders, have been arrested in the past week alone.

On Friday, two activists were arrested on charges of attempting violence against the country’s Queen Suthida, which could result in a possible life sentence. The arrests are linked to an incident that took place on Wednesday, where the queen’s motorcade drove past protestors in Bangkok who shouted and defiantly held up the iconic three-finger salute from the ‘Hunger Games’ film franchise, which became a symbol of liberation in Thailand soon after the military coup in 2014.

The protestors, Bunkueanun “Francis” Paothong and Ekachai Hongkangwan, will be charged under Section 110 of Thailand’s criminal code, according to the Thai Lawyers For Human Rights. If found guilty, the protestors could face between 16 years to a maximum of life imprisonment for violence or attempted violence against a member of the royal family.

The government claimed that it was because of the incident with the royal motorcade that they imposed the emergency decree early Thursday morning, CNN reported. The stakes were high this week, as for the first time the protests took place while King Maha Vajiralongkorn was present in the country. The king, who spends most of his time abroad, has returned to Thailand for a few weeks.

Amongst the key activists and protest leaders who were arrested on Thursday was Panusaya Sithijirawattanakul. In a widely watched livestream video, Panusaya is seen chanting slogans as she is carried by a group of police officials and put into the backseat of a vehicle. Human rights lawyer Anon Nampa and student activist Parit Chiwarak, widely known as ‘Penguin’, were also taken into custody.

On Thursday, police appealed to the demonstrators to disperse, before ultimately setting a 6 PM curfew, the BBC reported.