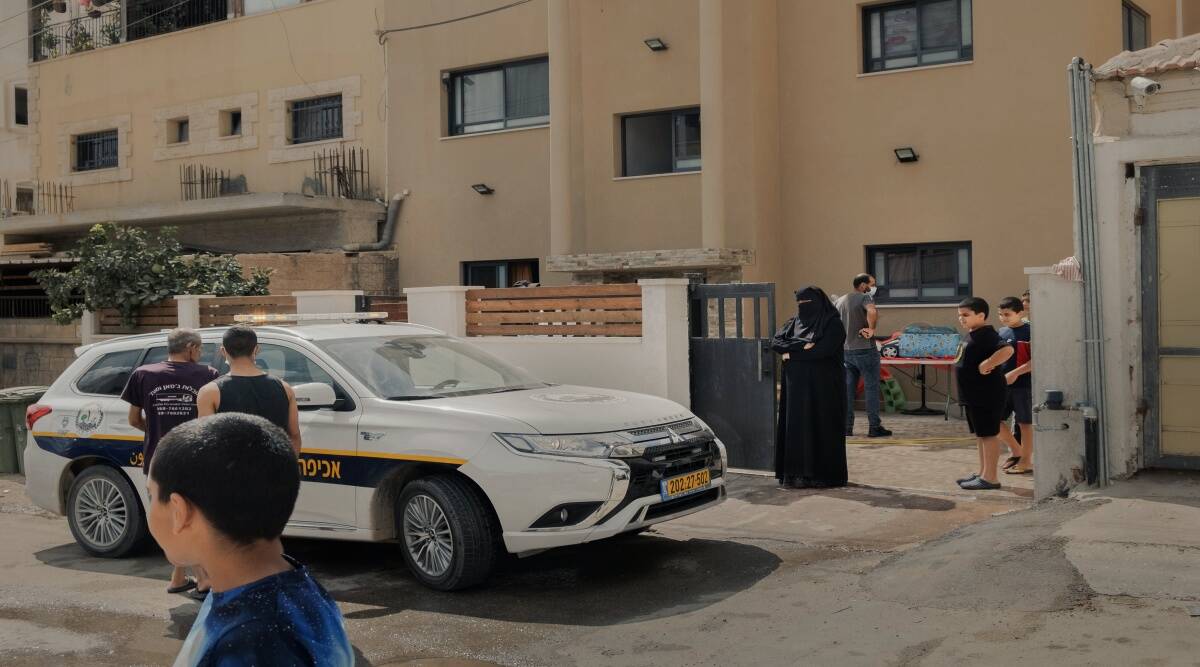 The killings — not by Israeli soldiers but by Arab criminals — account for about 70% of all Israeli homicides, though Arabs represent just over 20% of the population. 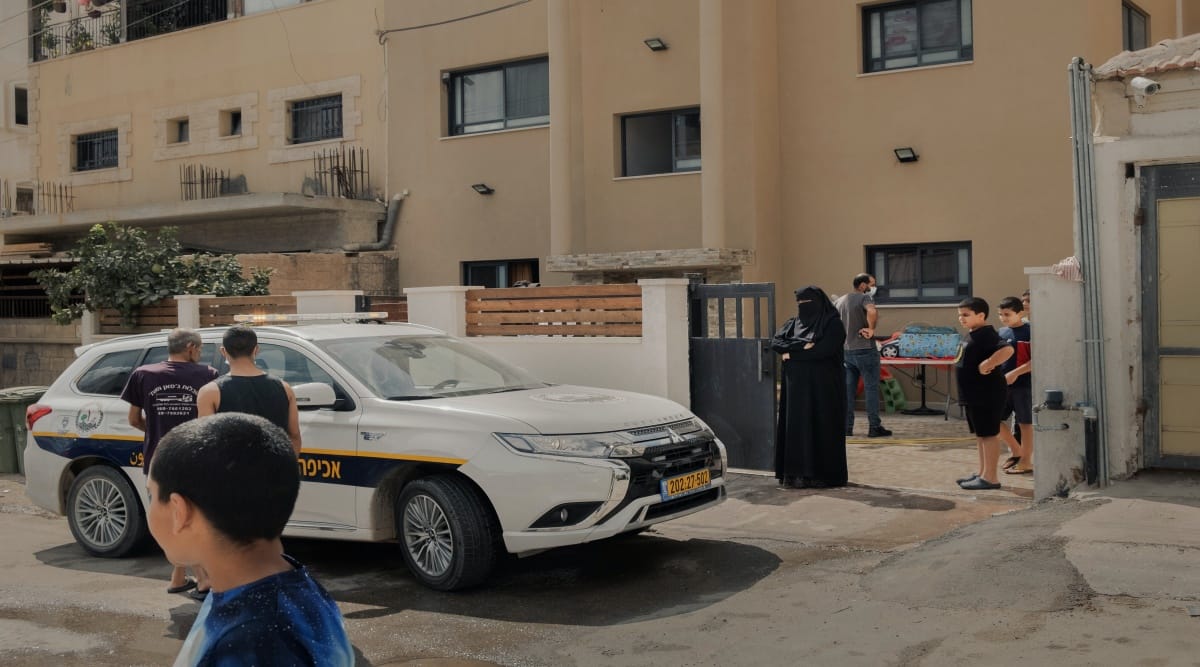 After a day of work in construction, Alaa Sarsour, 25, showered, dressed and walked the short distance to his friend’s pre-wedding henna party in a cobbled alley festooned with ribbons in the old heart of Taibeh, an Arab town in central Israel.

Suddenly, midcelebration, a wild burst of bullets split the cool night air, hitting Sarsour and five other guests. Sarsour died in his brother’s lap, relatives said, apparently the victim of a simmering feud between the gunman — a friend of the groom who had been at the party moments earlier — and a member of Sarsour’s family.

The shooting in September was just one of at least 16 homicides in Israel’s Arab communities last month and one of nearly 100 so far this year.

The killings — not by Israeli soldiers but by Arab criminals — account for about 70% of all Israeli homicides, though Arabs represent just over 20% of the population. The surging violence has shocked the country and put a spotlight on what the government acknowledges to have been decades of neglect of crime in Arab communities.

Prime Minister Naftali Bennett has described the violence as a “national blight” and will head a new ministerial task force to combat the problem that is set to meet Sunday.

Omer Bar-Lev, who as Israel’s minister of public security oversees the country’s police force, decried what he said was “the prevailing assumption that as long as they are killing each other, that’s their problem.”

The spike in killings has spawned an “Arab Lives Matter” campaign. But unlike the Black Lives Matter movement in the United States, Arab leaders are begging for police action.

“Can the Israel police really not overcome a bunch of criminal gangs?” demanded Ayman Odeh, the leader of an Arab alliance in Israel’s Parliament, at a demonstration last week. “Of course it can, but to put it simply, it treats us as its backyard.”

The number of homicides within the Arab community has spiraled in recent years, from 58 in 2013, according to the police, to about 97 in 2020 and at least 98 so far this year. An Arab citizen of Israel is far more likely to get killed by a fellow Arab than by Israeli police, and more Arabs have been killed by Arabs in Israel so far this year than have been killed by Israeli security forces in confrontations in the occupied West Bank, which receive much greater attention.

Fewer than one-quarter of the cases have been solved — a symptom, critics say, of both police indifference and Arab distrust of the police.

Out of more than 3,300 shootings in Arab communities in 2019, only 5% resulted in indictments, which police say is a result of difficulty in gathering evidence and locating suspects and witnesses.

In an impassioned Twitter thread the morning after the Taibeh wedding shooting, Bar-Lev blamed decades of government neglect for the problems of Arab communities and declared combating crime there the central mission of his ministry and the police.

But personal grudges, small land disputes between neighbors or even petty slights between schoolchildren add to the numbers, sometimes escalating into deadly clan vendettas. Guns have also been turned against women in cases of domestic violence and so-called “honor killings.”

Estimates of illegal guns in Arab communities range from tens of thousands to hundreds of thousands, though the Arab population of Israel numbers under 2 million. “Nobody really knows how to quantify it,” said Tomer Lotan, director-general of the Ministry of Public Security.

Arab politicians and activists have organized mass protests calling for government intervention. Mothers of victims marched from the northern city of Haifa to Jerusalem last year and in recent weeks have staged protests near Bar-Lev’s house.

“Every day they make promises and plans, him included,” said Watfa Jabali, 52, a Taibeh shopkeeper and activist who lost a son to gun violence. “And we hear on the news about another murder and another and another.”

As the numbers have increased, the killings have only become more brazen.

A month ago, Anas al-Wahwah, 18, an outstanding student and youth volunteer with the Israeli ambulance service, was shot at close range at noon while waiting for his mother in a car in the center of Lod, a mixed Jewish-Arab town in central Israel.

In April, a woman, Suha Mansour, was shot dead at a beauty parlor she ran in Tira, 5 miles from Taibeh. One Saturday afternoon in June, a couple and their teenage daughter were killed while driving along a highway in northern Israel.

Many Arab citizens question how a technologically advanced country like Israel, which had the intelligence capabilities to pilfer nuclear files out of Iran and to round up six escaped Palestinian prisoners within a week, has been unable to break up a few local criminal gangs.

Some are skeptical of authorities’ intentions, believing that they have deliberately let violence run amok in order to weaken the Arab minority in Israel, which largely identifies as Palestinian.

“It is all part of the Israeli-Palestinian conflict,” said Jamal Fattum, 47, a lawyer and social activist from the Arab town of Nahef, in northern Israel. “We are part of the Palestinian people, who have national aspirations.”

Fattum, who has helped organize protests against violence and government inaction, has at least 10 security cameras monitoring his upscale residence. But one night in April, his family awoke to shooting at the house and a boom as their car went up in flames. A bullet pierced the thick, wooden front door and lodged high in his dining room wall.

Fattum said he had no idea who the masked assailants were or what they may have wanted, other than to silence him. The police have investigated but made no arrests.

But in many cases, victims refuse to cooperate.

Whether out of mistrust of the police, fear of revenge, or both, officials and experts say, witnesses and relatives of victims often stick to a code of silence. Some crime scenes are cleaned up before the police arrive.

In the case of the wedding party, a suspect was swiftly apprehended. But once the case comes to court, said the father of the groom, Nasser Barabra, there would be no witnesses, even though the gunman was unmasked.

Successive Israeli governments have made promises and proposed plans of action. A commission including the directors of several ministries and Arab local council representatives studied the problem in 2020 and determined that the informal financial industry behind so much of the violence arose because Arabs have traditionally relied on a cash-based economy and often lack access to regular banking.

The lack of building permits and space for new housing in cramped Arab cities and towns has led to violent land disputes and precludes obtaining mortgages or loans from banks, making Arab society vulnerable to loan sharks, extortion and ruthless debt collectors.

The illegal weapons flooding Arab towns are often stolen from the military or smuggled across the border from Jordan, according to the state comptroller, the government watchdog. Improvised weapons are manufactured in the West Bank, and airsoft pellet guns that can be ordered from Amazon have been adapted to fire real bullets, comptroller’s reports have said.

The military said it was working with the police and security groups to reduce the theft of weapons from its bases and had improved surveillance measures. It reported 80 cases of stolen weapons in 2020 and 21 cases so far this year.

The burst of intercommunal mob violence that shook Israel last May has also served as a catalyst for more urgent action by authorities, raising fears that the weapons could be turned against the Jewish public.

Lotan said the government had a detailed plan ready to put into action once the state budget is passed in November. It calls for recruiting an additional 1,100 police officers, legislative changes to deal more efficiently with economic crime, more use of technology and an improved witness protection program — all measures intended to improve access and trust in Arab communities.

Bennett has proposed enlisting Shin Bet, Israel’s internal security agency, in the campaign, though that has become a point of contention, with many people opposing using counterterrorism means against civilians.

“You need a tough hand against the organizations and the weapons,” Lotan said, “and in parallel, you need to continue to work on the broad social issues” — what he called the “huge inequality in all spheres.”