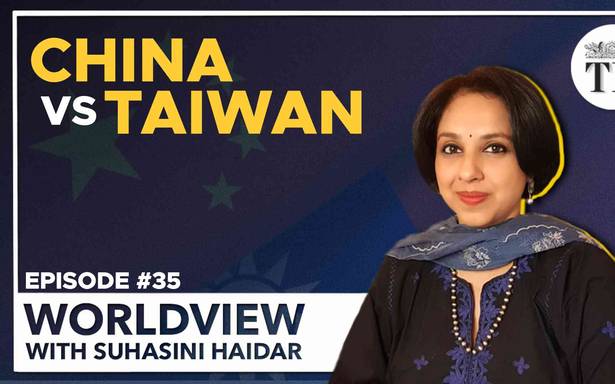 This week on Worldview, the recent tensions between China and Taiwan, how worried India should be about the situation?

Chinese jets across Taiwan, US and UK exercises in the waters, how worried should India be about the situation in the South China Sea?

Over 4 consecutive days this week China sent a record number of 149 jets to conduct sorties inside Taiwan’s Air Defence Identification Zone. China considers Taiwan a part of its territory, although since 1949 it has been controlled by a separate government.

The sorties came as the US UK and allies conducted military exercises in the region, passing south of Taiwan, including the British carrier Queen Elizabeth, the first time it has sent this kind of ship and flotilla since 1997. Also follows the first Quad summit in Washington and the announcement of the AUKUS partnership for nuclear submarines in Australia

Taiwanese Defence Minister called it the worst situation in 40 years, and Taiwanese President Tsai Ing Wen wrote in an article that Taiwan will never bow to Chinese pressure

The US, which criticised the flights, counselled restraint, President Biden said the US and China will abide by their earlier agreements. At a meeting in Zurich US NSA Jake Sullivan and Chinese State Councillor Yang Jiechi set the stage for a virtual summit between Biden and Xi in the next two months.

The Taiwan situation also came up during a visit to Delhi by US Dy Secretary of State Wendy Sherman, who called the Chinese strikes a very dangerous action.

Why does it matter to India?

–  Instability in the region

–  Government is already dealing with Chinese aggression at the LAC, would like to avoid actions that would precipitate more violence

–  India’s membership of the Quad- with US, Japan and Australia is committed to keeping the Indo-Pacific region free and open

–  India is also a member of SCO, BRICS, RIC with China

–  1949: India recognised PRC, not the ROC as the government in Taiwan calls itself, and adopted the “One China policy”

–  1995: India-Taipei association was established, and led to the setting up of an Indian office in Taipei, and the Taipei Economic and Cultural Centre in Delhi- but while they both issue visas, they are not the equivalent of diplomatic relations

–  India has always been sensitive to China’s concerns, but after a number of Chinese aggressions at the Line of Actual Control in 2010, comments on Arunachal Pradesh, as well visa issue on Jammu Kashmir, India stopped the use of the “One China Policy”

–  In 2018, Delhi and Taipei signed a bilateral investment agreement

–  As Chinese PLA aggressions at the Line of Actual Control led to the Galwan killings in 2020, calls for India to step up its ties with Taiwan have grown, coupled with questions about whether India, as a newly active member of the Quad will take a more vocal approach on China-Taiwan developments, or remain sensitive to its ties with Beijing. For the moment the latter seems the more likely option.

Remember, The United Nations and most countries recognise the PRC in Beijing as the sole legal government of China (which means they don’t recognise the ROC in Taipei). Currently fifteen states recognise Taiwan as the ROC (and thus do not have official relations with Beijing): Belize, Guatemala, Haiti, Holy See, Honduras, Marshall Islands, Nauru, Nicaragua, Palau, Paraguay, St Lucia, St Kitts and Nevis, St Vincent and the Grenadines, Swaziland and Tuvalu. Another 57 have representative offices, like India does, and China has succeeded in reversing two countries over (Map)

Areas where India’s ties with Taipei could grow:

–  Investment in semiconductor technology: According to reports India and Taiwan are in talks on an agreement that could bring a chip plant worth an estimated $7.5 billion to India to supply everything from 5G devices to electric cars.

–  Health relations: Especially in the wake of the Coronavirus pandemic, both Delhi and Taipei can step up health and science research

1. The China Challenge by Ananth Krishnan

2. The Long Game: How the Chinese Negotiate with India by Vijay Gokhale

3. India-Taiwan Relations in Asia and Beyond: The Future – Edited by Jagannath Panda, of papers presented at an IDSA conference

5. India and Asian Geopolitics: the Past, Present by Shivshankar Menon